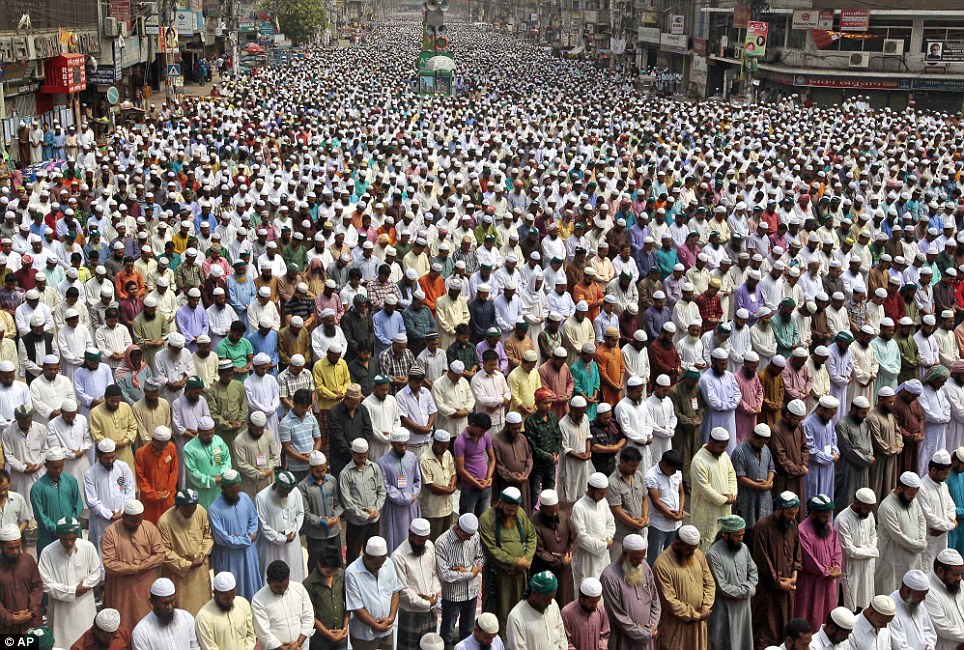 The Prophet of Islam , Muhammad (peace be upon him) , was born in 570 AD. Only 50 years later, in 720 AD, Islam came to Bangladesh . The journey started in the northern district Lalmonirhat. Various researches and inscriptions have strengthened this claim. It is also seen that the first mosque of the country was built in 690 AD in a village called 'Majeder Ara' in Panchagram union of this district. During the excavation of the forest at Panchagram in 1986, the ruins of an ancient mosque were found. One of the bricks has Kalima Tayyiba and 69 AH written on it. It is inferred from this that the mosque was established or renovated around 69 AH, i.e. 790 AD.

It is known from the history books of Rangpur district that Abu Waqqas, the cousin of Amena, the uncle of Rasulullah (peace be upon him), preached Islam in Bangladesh from 620 to 628 AD (p. 126). Many speculate that he also built the mosque at Panchagram, which was renovated in 690 AD.

Matiur Rahman Basunia's book 'Rangpur Deeni Dawaat' also contains details of this mosque. Although the idea of ​​'Ikhtiyar Uddin Mohammad bin Khilji preached Islam in the country' has been established, this information proves that Islam was preached in this country long before that. Islam was introduced to Bangladesh by the Companions about 600 years before the conquest of Bengal by Ikhtiyar Uddin Mohammad bin Khilji in 1204 AD. The first mosque was also built at that time.

At the beginning of the 13th century, the Mughal conquest of Bengal in northern India took place in 1192. Mainly taking place as a result of Muhammad Ghori's expedition. Syed Shah Nasiruddin was from Iraq but came to Bangladesh to spread Islam.

Shahjalal (born in Turkey 671 AH im Death 1271; 740 AH, 1341 AD), the Indian subcontinent, the famous Sufi saint. His full name is Shaikh Shah Jalal Kuniyat Mujarrad . It is believed that he came to Sylhet region of present day Bangladesh in 1303 AH at the age of 32 to propagate Islam .

Shah Makhdum Ruposh (1217-1331 AD) was one of the renowned Sufi saints and preachers of Bengal. He preached the glorious message of Islam in Bangladesh and Rajshahi region in the last half of the thirteenth century and the beginning of the fourteenth century. Hundreds of people were initiated into Islam, fascinated by his unique personality. It was mainly through Shah Makhdum that the strong foundations of Islam were established in the Barind and Gaur regions. At present these areas are Muslim majority areas

Most of the Muslims in Bangladesh are Sunnis. They are followers of the Hanafi school. These groups include the Deobandi and Barelvi movements. The World Ijtema (World Congregation) attracts 5 million people across Bangladesh and South Asia, focusing on prayer and meditation, an event held annually by the Tablighi Jamaat.

Ahl-e-Hadith has a large following in Bangladesh. Ahl-e-Hadith has three main groups, most of which are led by Muhammad Asadullah Al-Ghalib. There are about 1500 Ahlul Hadith mosques and 50 madrasas in the country.

After 1971, the government decided to increase its role in the organization of people's religious life. Ministry of Religious Affairs, Support and Financial Aid of religious institutions, including mosques and prayer representative societies. Organizing annual pilgrimages from Mecca because the Kingdom of Saudi Arabia and the Government of Bangladesh's regulated foreign exchange rules come under the supervision of the Ministry of Restrictions on the number of pilgrims. The Islamic Foundation of Bangladesh, which is responsible for supporting the organization of the ministry and research and publications on Islamic subjects, also works. Association Baitul Mukarram (National Mosque) and is responsible for maintaining the organization and training of imams. About 17,000 Islamic cultural centers, libraries, have been trained to build a national network. Islamic Foundation The Bangla Islam Encyclopedia was written in the late eighties under his patronage.

Email ThisBlogThis!Share to TwitterShare to FacebookShare to Pinterest
Labels: Bangladesh, Islam in Bangladesh