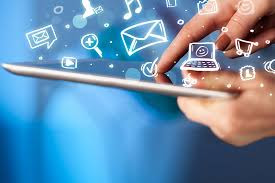 Like other developed and developing countries in the world, the use of internet and information technology in Bangladesh has increased at a surprising rate. The Government of Bangladesh is working on a priority basis to increase people's access to and use of the Internet and Information Technology, which has resulted in an increase in the number of Internet users in Bangladesh by 100 million (100 million) by 2020, despite many limitations . At present, the total population of Bangladesh is about 160 million and 72% of the total population are Internet users. In April 2019, the number of internet users in Bangladesh increased to 93.602 million. Bangladesh started providing 4G network service on 19 February 2017.

Until May 2020, the Internet was mainly supplied to Bangladesh by two submarines, CMU-4 and CMU-5. Its bandwidth supply capacity is 300 Gbps and 1600 Gbps respectively.

In the late 90's, some local service providers introduced the facility of using email through dial-up system in Bulletin Board System (BBS) system , but more than 500 users did not get this facility. On the other hand , despite the users being charged in kilobytes , their e-mails were transferred through the dial-up use of the international BBS service provider .

The number of Internet subscriptions in Bangladesh grew from 186,000 in 2000 to 617,300 in 2009. However, only 0.4% of the population used the Internet in 2009 giving Bangladesh one of the lowest usage percentages in the world, ahead of only North Korea, Myanmar, and Sierra Leone. This limited Internet penetration is due to many factors, including: unavailability in rural areas, high costs, little local content, limited or poor service quality, lack of infrastructure with the last mile often limited to dial-up, too many providers competing in a relatively small market, and low literacy rates. By 2011 however, the number of Internet users in Bangladesh had seen phenomenal growth of over 900% bringing the total number of users to 5,501,609 (3.5% of the total population) mainly due to wide availability of mobile Internet access.

In April 2010, Akhtaruzzaman Manju, president of Internet Service Providers' Association of Bangladesh, said "we've estimated that nearly 10 million people in the country are using 800,000 Internet connections on sharing basis", adding the number of Internet users in the country is increasing roughly 15-16 percent a year. "This increased Internet penetration will result in a 2.6 per cent contribution to the country’s GDP by 2020, while creating 129 thousand more jobs by the same year" the research added.

The main obstacle to using the Internet in Bangladesh is its distribution. The Internet is still an urban privilege because telephone connections are more concentrated in urban areas, particularly in and around Dhaka. Mobile operators are providing substantial services in and outside urban areas using 3G/EDGE or WiMax.

All ISPs and equivalent service providers in Bangladesh exchange traffic via two systems, the National Internet Exchange (NIX) and International Internet Gateways (IIGs). The IIGs provide global Internet connectivity, while all domestic Internet traffic is routed via the NIX to minimize usage of international bandwidth. The NIX consists of two exchange points known as the Bangladesh Internet Exchange (BDIX) established in August 2004 and operated by the Sustainable Development Networking Programme and the Peering Society of Bangladesh and the Bangladesh Society of Internet Exchange (BSIX) established in May 2004. In June 2012 the BTRC announced plans to issue an unrestricted number of additional NIX licenses. There are two IIGs in service operated by, Mango Teleservices Limited  and the government owned Bangladesh Telecommunications Company Limited (BTCL).

There are concerns that, with a limited number of NIX operators, only two IIG operators, and with BSCCL holding a monopoly as the only operator of the SEA-ME-WE fiber optic cables, limited competition will keep the cost of raw bandwidth high.

Internet Service Providers Association of Bangladesh (ISPAB) is an association for all the internet service providing organizations in Bangladesh. It’s formed by a committee of some of the most notable industry decision makers to represent the Internet industry by providing information and services on various key areas such as seeking Govt.’s help/attention, defining legal framework to protect the industry, expanding Bangladesh’s market, providing education on websites and internet usage, etc. ISPAB is a non-profit organization which prides itself in making profits for distribution to its members.

Because fixed line penetration rates are and are expected to remain low, most Bangladeshis' first experience with the Internet is likely to be via mobile services. An estimated 90% of Bangladesh's Internet users got their access using mobile services in 2010.Out of the Four mobile operators, Teletalk, Grameenphone, Robi, & Banglalink offer 3G, 4G services in 64 districts of Bangladesh, others offer 3G, 4G Internet service on some specific areas and EDGE or GPRS GSM Internet service on rest of the areas. Operators are working on expanding their 3G, 4G services in all areas. The sole CDMA operator, Citycell, used to offer EVDO before it was shut down by the government in 2016. Airtel Bangladesh merged with Robi.

Three companies, BanglaLion Communications Ltd., Brac Bdmail Network Ltd., and Augere Wireless Broadband Bangladesh Ltd., won licenses to operate WiMAX in Bangladesh in September 2008. The three firms purchased the licenses at auction for 2.15 billion BDT (US$31 million) from the BTRC under an agreement that pays 27.50% of revenue to the government. Brac Bdmail declined to start the service. BanglaLion and Augere (branded as Qubee) launched commercial WiMax services by the end of 2009.

Expensive and slow connections available from individual homes has created a demand for cyber cafés with higher than average bandwidth. The number of cyber cafés was estimated to be roughly 800 in 2009, unchanged from 2005. Cyber cafés were first regulated by the BTRC in 2009, but fewer than 150 had obtained the required license by the end of 2011.

Given the state of the signal or for the internet for top-level domain is the .bd and .বাংলা

Email ThisBlogThis!Share to TwitterShare to FacebookShare to Pinterest
Labels: Bangladesh, Internet in Bangladesh