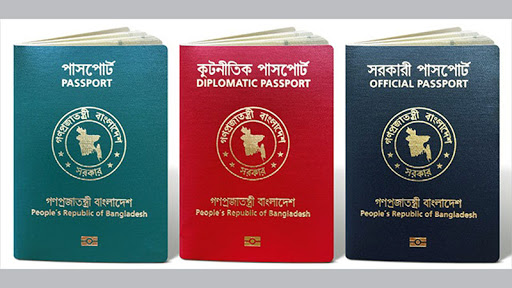 Bangladeshi Passport is an ICAO compliant, machine readable and biometric e-passport issued by the passport holder for the purpose of traveling abroad. Bangladesh is the first country in South Asia to issue e-passports for all eligible citizens. The passport booklet isproduced, printed and issued by the Immigration and Passport Department of the Ministry of Home Affairs . The e-passport has an electric microprocessor chip embedded in it. The e-passport has thirty-one different security features, including a holographic image embedded in a thin membrane layer. This protection feature changes color under light and appears as moving.Demographic and biometric information of the e-passport holder, such as ten fingerprints, iris scan, color photograph of face and digital signature are stored on the chip in the e-passport. Depending on the age of the applicant, the e-passport is valid for five years or ten years and is distributed among eligible Bangladeshi nationals by birth or directly through the Government of the People's Republic of Bangladesh or its foreign diplomatic missions .

The Bangladesh government issues three types of passports. Among them is a red cover with a diplomatic passport; Blue cover which is the official passport; And green cover which is regular or ordinary passport. The cover of the passport is made of tear proof textile material which is resistant to chemicals, sweat, damp and heat. Diplomatic passports are issued only to Bangladeshi diplomats. Official passports are issued only to Bangladesh government employees, government officials and envoys. Other citizens of Bangladesh are given regular or ordinary passports. All passports are made of eco-friendly materials. It is an important historical landmark of Bangladesh along with all the blank visa pages of the passport and a picture of the building. Besides, their names are designed in both Bengali and English to attract popular Bangladeshi tourists. The page number of the passport is bilingual - written in both Bengali and English.

After the War of Liberation of Bangladesh Act No. 9 of 1973 (known as Bangladesh Passport Order, 1973) which was signed into law on February 8, 1973 by the President of the People's Republic of Bangladesh. Newly independent Bangladesh managed to create and issue the first passport. This passport booklet was a traditional, handwritten or handwritten passport and adhered to the relevant international law and regulations at the time. Subsequently, additional legislation was enacted the following year to improve the passport application process. This law stipulates that multiple valid Bangladeshi passports cannot be kept; There are citizenship requirements for passports; Etc.

In 2016, the Bangladesh government announced its plans to issue e-passports . Due to which the then Home Minister hoped that immigration, travel and visa system would be easier for the passport holders of Bangladesh.  New Bangladeshi e-passports are being provided in all major ports of entry with fifty e-gates in collaboration with a German company. Machine-readable passports are coming out in phases. E-passports will completely replace all machine-readable passports. However, all machine-readable passports are proof of fun and valid travel as they are written until the expiration date. With the introduction of the expected electronic passport or e-passport, Bangladesh has taken another important step towards its digital transformation. Prime Minister Sheikh Hasina inaugurated the e-passport distribution at a conference at the Bangabandhu International Conference Center in the capital on Wednesday, January 22, 2020.

The Bangladesh government issues three different types of passports. These are diplomatic, official and regular or ordinary passports.

Passport of the information provided by the

The front cover has a picture of the National Memorial and the national anthem .

The first page of the passport mentions the order issued by the President of Bangladesh in Bengali and English :

On behalf of the President of the People's Republic of Bangladesh, all concerned are being informed to this effect and it is expected that its bearer will be allowed to travel freely and without any hindrance and all necessary assistance and security will be provided to him.

By order of the President of the People's Republic of Bangladesh.

More information in the container is stored with optical character recognition , which can only be read by a special instrument.

On the third page of the passport, 6 instructions for the passport holder are written in Bengali . It is accompanied by a statement in English which means "If this passport is lost abroad, its founder is requested to submit it to the nearest Bangladeshi embassy ."

More information about the holder is written on the fourth page of the passport:

As of 2019, Bangladeshi citizens have visa-free access to 11 countries and territories. According to the Visa Restrictions Index , Bangladeshi passports are ranked 119th in the world in the passport rankings.