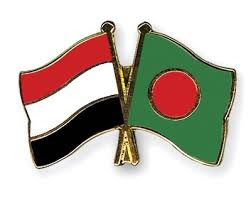 North Yemen is one of the first countries to recognize the government of Khandaker Mostaq Ahmed after the 1975 coup in Bangladesh .

Bangladeshi President Hussein Muhammad Ershad visited North Yemen in July 1986 to strengthen trade and cooperation. During the visit, two agreements on bilateral cooperation were signed between the two countries. This is the first visit of a Bangladeshi president to northern Yemen.

The education sector has been identified as a potential area for expanding bilateral cooperation between Bangladesh and Yemen. Both sides expressed the need to have educational exchange programs, especially in the fields of engineering and information technology.

In the 1990s, trade and labor migration between Bangladesh and Yemen increased, as did economic relations.

Bangladesh and Yemen have expressed mutual interest in expanding bilateral trade and investment. Bangladeshi medicines, ceramics, melamine, jute and fabrics, leather goods, etc. have been identified as promising industries with huge demand in the Yemeni market. In 2013, Yemeni President Abdur Rahman Mansour Hadi expressed his desire to build some patrol vessels for the Yemeni Coast Guard at Bangladeshi shipyards. Yemen has offered to sign an agreement on trade and commerce with Bangladesh. In addition, emphasis has been placed on exchanging business delegations between the two countries.