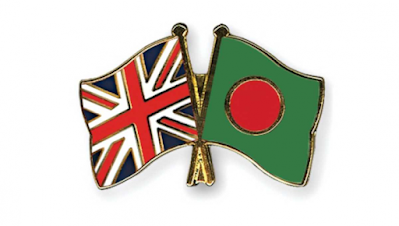 The relationship between Britain and Bangladesh started from British India . Britain sheltered diplomats who fled during Bangladesh's war of independence . The British government, politicians and the media criticized the atrocities in Bangladesh and expressed sympathy for the freedom fighters. Britain recognized Bangladesh on 4 February 1972, as a result of which Bangladesh was later recognized by other European and Commonwealth countries and on 17 April 1972 Bangladesh was annexed to the Commonwealth. In 1982, Britain established a High Commission in Dhaka, the capital of Bangladesh. Anthony Golds was the first British High Commissioner to Bangladesh.

In March 2008, Fakhruddin Ahmed had visited Number 10 to discuss increasing British investment and cooperation in defence and trade, especially on counter-terrorism and duty-free access for LDCs. Britain is the largest foreign investor in Bangladesh and the third biggest export destination for Bangladeshi goods after the USA and Germany.

At the 7th ISS Asia Security Summit (also known as Shangri-La Dialogue) in Singapore, Bangladesh's foreign advisor Iftekhar Ahmed Chowdhury met with the UK's Defence Minister Des Browne at the sidelines to discuss security and defense relations between the two countries. Browne says he hopes that Bangladesh's modernizing values can reach the Bangladeshi diaspora in the UK.

Bengali ethnic media in the United Kingdom, the oldest and largest Bengali media in the world; It operates 5 TV channels and 12 Bengali and English national dailies / weekly newspapers with significant reputation. This medium is doing a commendable job in creating awareness among the second and third generation British-Bangladeshis about Bangladesh and Bangladeshi culture.

Between 2008 and 2012, bilateral goods and services grew by 119%. The United Kingdom exported 450 million worth of goods and services to Bangladesh in 2013. Of these, 71% were service-based. In 2014, the export of goods was 131 million pounds. In 2013, the UK's main exports to Bangladesh were nuclear reactors, boilers, machinery and mechanical applications / electrical parts and equipment / sound recorders and regenerators, television images and sound recorders and producers, and parts / accessories, iron and steel, for medical purposes. Cattle feed.

High Commission for the People's Republic of Bangladesh, London.