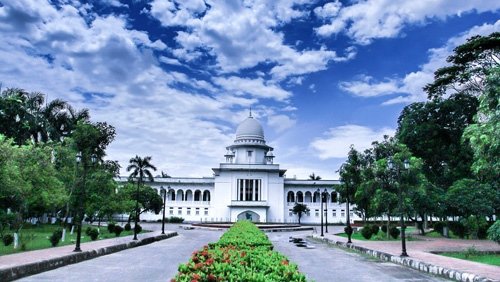 Pursuant to Article 100 of the Constitution , the permanent seat of the Supreme Court shall be located in Dhaka , the capital of Bangladesh .

According to the provisions of the Constitution, the Supreme Court of Bangladesh has two divisions: the Appellate Division and the High Court Division .

The High Court Division hears appeals from lower courts and tribunals. In addition, writ petitions under Article 102 of the Constitution of Bangladesh, and the Company and the Army have core jurisdiction in certain limited cases as matters. The Appellate Division has jurisdiction to hear appeals from the High Court Division.  The Supreme Court can rule against the government in cases that are independent of the executive branch and politically controversial.

The Chief Justice may constitute a bench of the High Court consisting of one or more judges.

Despite the fact that Bengali is the only state language under the Constitution of Bangladesh and in violation of the Bengali Language Act, 197 , the Supreme Court's judgment is still criticized in English, as it was during the British colonial rule.  The Prime Minister of Bangladesh Sheikh Hasina has called for writing the verdict of the Supreme Court in Bengali, saying, "The verdict should be written in the language we all understand. And you can write the verdict in Bengali and translate it into English. ”  Former Chief Justice of Bangladesh Muhammad Habibur Rahman wrote, "If justice is a virtue and if it works for the welfare of the people, then it should be in the language of the people." However, "I say openly that if the people of the country want all the work of the Supreme Court of their country to be in their language, the judges will not want to voluntarily hand over Bengal until their representatives pass the law in Parliament."

Prior to his appointment as Justice, Justice AKM Asaduzzaman and Justice SM Emdadul Haque were central members (Rukn) of Bangladesh Jamaat-e-Islami .