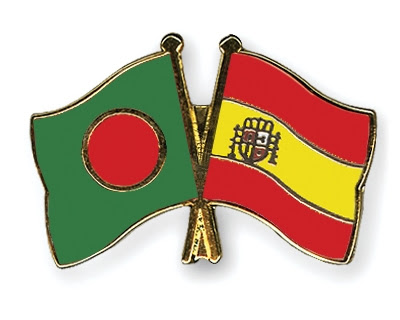 Bangladesh-Spain ties to Bangladesh and Spain's bilateral relations means. Bangladesh has an embassy in Madrid , and a Spanish embassy in Dhaka .

The two countries have warm diplomatic relations. In 2014, Spain planned a program to invest in Bangladesh.  In 2011, the Spanish multinational company Isolux Corsan signed an agreement to build a 340 MW gas-fired power plant at Siddhirganj in Narayanganj, Bangladesh. Cobra-Tedagua, a Spanish company, has partnered with WASA to provide clean water and sanitation in 10 districts of Dhaka's Mirpur zone . According to ICEX, bilateral trade between Spain and Bangladesh is about 1,500 million euros a year.

For his unprecedented contribution to the development of bilateral relations between Spain and Bangladesh, King Felipe VI of Spain conferred the highest civilian honor of Spain, the Commitment to the Number of the Civil Merit Order, on Nasrul Hamid, Minister of State for Power, Energy and Mineral Resources of Bangladesh. On 16 February 2017, Alvaro de Salas, the Spanish Ambassador to Bangladesh, presented the Medal of Honor on behalf of the King of Spain.

Embassy Of Spain in Dhaka, Bangladesh