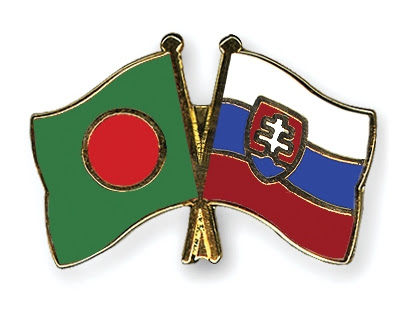 Bangladesh–Slovakia relations refer to the bilateral relations between Bangladesh and Slovakia. The diplomatic relations officially started in 1993.

In 1997, Bangladesh's Ambassador to Slovakia discussed an agreement on cultural cooperation with the Slovak Minister of Culture. In 1999, the Prime Minister of Bangladesh Sheikh Hasina paid an official visit to Bratislava.

Slovakia has expressed interest in providing higher education scholarships to Bangladeshi students. The two countries "also agreed to sign new agreements on culture, science and technology and other areas of cooperation in line with the old agreement between Bangladesh and Czechoslovakia."

Bangladesh and Slovakia have tried to expand trade. In 2010, the two countries drafted an agreement to boost bilateral trade and investment.Bangladeshi exports to Slovakia stood at more than 100 million euros in 2011, which is significant considering Slovakia's small population.  Most of the Bangladeshi export items are related to garment products. Bangladeshi jute, leather and leather products, ceramics and medicines have been identified as export items in the Slovakian market. Chemical products predominated in Slovakia's export items. Bangladesh and Slovakia have been discussing the possibility of forming a joint business council to explore business opportunities.

Consulate of Bangladesh in Bratislava