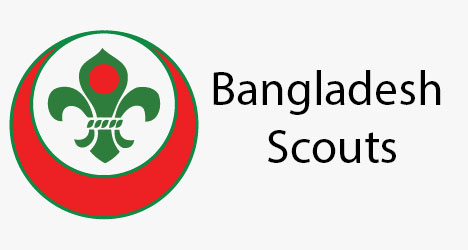 The Bangladesh Scout Movement is mainly divided into three branches.

However, the age limit for railway, naval and air sector employees has been fixed at 30 years.

Scouts are given different types of proficiency badges considering their skills . This shows how skilled a scout is.

The prayer music of the scouts is three.

You are the King of religion

King, you are the religion and the world

Prostrate me a thousand times,

The moon is the sun and the planets are the stars,

They are singing day and night

Ravi and Shashi are brilliant ..

The flower is in the garden ...

Everything in the world

Mercy goes to you

You die and live in the middle

King, you are the religion and the world

You are infinitely loving

Husband of the day of judgment.

As great as praise, O ever great

I fell at your feet

In your presence, O Shakti

O God, the Most Gracious

O God, the Merciful, the Compassionate,

You are the master of all kinds,

You are always true and holy.

In eternal darkness you are the constant light,

You are beautiful, Your Excellency.

You are free, free, bound,

You are one, you are unique forever.

You are the Creator, the Keeper, the Destroyer,

You are indefinite, eternal, primitive.

I am a sinner, my way is dark,

The light of the burning light is in my eyes.

I do not want the Day of Judgment,

All I want is mercy, Ogo Hakim.

The scouts of Bangladesh have to abide by 6 rules, these are -

The motto of Bangladesh Scouts:

I promise, depending on my self-esteem,

I will do my best.

The principles of scouting are three -