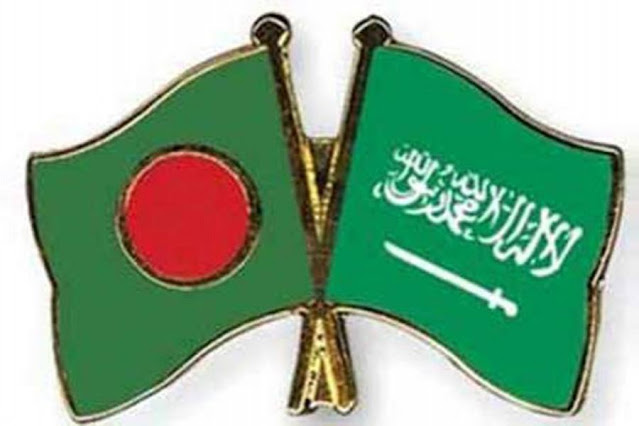 Bangladesh-Saudi Arabia relations officially started in 1986 when Saudi Arabia recognized Bangladesh as an independent and sovereign country after gaining independence in 1971 . At present, the relations between the two countries are fraternal, strong and evolving.

There are currently good relations between the People's Republic of Bangladesh and the Kingdom of Saudi Arabia . Muslim -majority state, as a spiritual bond between the two countries was made in the usual way, because the Saudi Arabia of Islam, the religion of Islam is to develop important installations located there. Both countries are  members of the Organization of Islamic Cooperation (OIC). Many expatriate Bangladeshis work in Saudi Arabia.

East Bengal gained independence in 1947 as part of the newly established Muslim state of Pakistan . Saudi Arabia formed an alliance with this newly established state. But within a few years the people of Bengal started a movement based on Bengali nationalism and over time it turned into a war. In that war of 1971, Saudi Arabia supported Pakistan. He called the Bengali nationalists anti-Muslim and anti-Islamic. At the same time, good relations developed between Bangladesh and India and the Soviet Union, who cooperated fully in the war of independence of Bangladesh. After the end of the war of independence of Bangladesh, different countries of the world started recognizing it as an independent country. But Saudi Arabia has not yet recognized it.

The establishment of diplomatic relations

Relations between the two countries

In 2016, a picture of a Bangladeshi was published through social media. Who was engaged in road cleaning in Saudi Arabia. The picture shows him looking at the jewelry displayed in a gold shop. The Arabs started making ridiculous comments on the social media film. But the Bangladeshi was not aware of that picture or comment. In the wake of such an incident, a Saudi citizen was embarrassed and came to find the Bangladeshi man with the gold jewelry and a lot of money as a gift.

The Royal Embassy of Saudi Arabia in Dhaka, Bangladesh