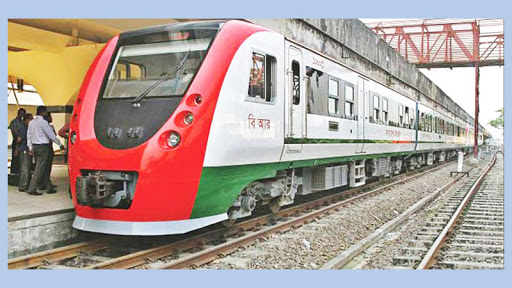 Bangladesh Railway is the official railway transport company of Bangladesh . It is headquartered in Dhaka . In 1990, the agency conducted its activities under the newly established Ministry of Railways .

Bangladesh Railway is basically divided into two parts, one on the east side of the river Jamuna and the other on the west side. The length of the eastern side is 1269 km and the length of the western side is 1428 km. Besides , the 32 km long Rupsha-Bagerhat broad gauge line section on the eastern bank of the Rupsha River in the south is also considered as the third part of Bangladesh Railway.

Railway activities in Bangladesh started during the British rule in 182. In the nineteenth century, various railway companies in England started launching small railway sections in different provinces of India. At first the railways were introduced only for economic work. A company called Eastern Bengal Railway was the first to establish a railway in Bangladesh. Bangladesh entered the railway era by establishing a railway from Darshana to Kushtia.

Eastern Bengal Railway Company Kolkata from Ranaghat the broad gauge (5 feet 6 inches) railway section, on 9 September 1862 and from Ranaghat Darshana the Kushtia the railway section was launched on 15 November 1862. The section up to Goalanda was opened on 1 January 181. In order to deal with the famine from 184 to 179, the section from Sarai to Siliguri was introduced on the North Bengal State Railway meter gauge (3 feet 3.38 inches). Parbatipur to Dinajpur and Parbatipur to KauniaThe company also launched the meter gauge section. On 1 July 184, the Eastern Bengal Railway came under government management and on 1 April 17 it merged with the North Bengal State Railway.

A small company called Dhaka State Railway started the 204 km long broad gauge section from 172-164 Dumdum Junction to Khulna . On 1 April 1904, it came under the government management of the Eastern Bengal Railway.

A company called Brahmaputra-Sultanpur Railway Branch started the meter gauge section from Santahar Junction to Fulchhari in 1899-1900 . This company also came under the government management of Eastern Bengal Railway on 1 April 1904. In 1905, the 80 km long Kaunia-Bonarpara meter gauge section was opened.

In 1896–1899, a privately owned meter gauge railway section from Mymensingh to Jagannathganj was introduced. Which later came under the control of the Eastern Bengal Railway. In 1915-1916, about 85 km long to respond - Sirajganj section Sirajganj response was built by the railway company. On October 1, 1944, this section came under government management.

On June 10, 1918, the 31.6 km long Rupsha- Bagerhat Narrow Gauge (2 ft 6 in) section was launched by the Eastern Bengal Railway on behalf of a branch line company. It came under government management in 1947-49.

In 1896, the Darshan-Poradaha section was upgraded from a single line to a double line. The Poradaha-Bheramara sections were gradually upgraded to double line in 1909, Bheramara-Ishwardi in 1915 and Ishwardi-Abdulpur in 1932.

The tea companies of Assam were at the root of the formation of the Assam Bengal Railway Company. The company was formed to export jute, rice, tea and coal to the prosperous districts of Dhaka , Mymensingh , Chittagong , Noakhali , Tripura and Assam . The entire section of the railway laid by this company is located on the east side of the river Jamuna and its entire meter gauge railway.

July 1, 1895, about 150 km long Chittagong - Comilla and 80 . Two 54 meter long Laksam - Chandpur meter gauge sections were introduced. The Chittagong to Chittagong port section was launched on 3 November of the same year. The Comilla- Akhaura and Akhaura- Karimganj sections were opened in 1896 . In 1903, the railway was extended to Tinsukia. Lord Curzon , the then Viceroy of India, inaugurated the 1191 km long railway built in Chittagong during 1904 .

There was no rail connection between Ashuganj on the east bank of the Meghna River and Bhairabbazar on the west bank. The railway of East Bengal was then divided into three sections by the river Jamuna and the river Meghna. On 6 December 1936, the King George VI Bridge over the Meghna River was inaugurated and the first railway connection between Ashuganj and Bhairabbazar was established. Through this direct rail link was established between Dhaka and Chittagong.

In 1942, the Assam Bengal Railway Company was taken over by the government and it was merged with the Eastern Bengal Railway and renamed as "Bengal and Assam Railway".

Railway activities in Bangladesh started from 15 November 182. At that time a 53.11 km 5 feet 6 inches (1.6 mm) ( broad gauge ) line was laid from Darshan in Chuadanga district to Jagati in Kushtia district . Then, on January 4, 185, a 14.98 km 3 foot 336 inch (1,000 mm) ( meter gauge ) line was introduced. In 1891, construction of the then Bengal Assam Railway began in collaboration with the British Government , but it was later acquired by the Bengal Assam Railway Company. July 1, 1895, 149.79 km from Chittagong to Comilla and from Laksam to ChandpurTill now two sections of 50.69 km meter gauge line have been introduced. Railway companies formed in England in the mid and late nineteenth century were responsible for the construction of these sections.  In January 185, the Dhaka-Narayanganj railway was opened. In 17 AD the railway was extended to Joydebpur. On 15 November 182, the railway from Calcutta to Kushtia was started. The first Viceroy of British India was Lord Dalhousie of the East India CompanyHe proposed to the Board of Directors to set up a railway in India. Later, on 17 April 1853, the 33 km long railway line from Mumbai to Anna was inaugurated by a company called Gate India Peninsular Railway. This was the first journey of the British Indian Railways. The first railway line in Bengal was started in 1854 with the inauguration of a 36 km railway line from Howrah to Hooghly in West Bengal. Between 184 and 189, the British government built a new 250 km long meter gauge railway called the North Bengal State Railway. The line runs from Sara (Hardinge's Bridge) along the left bank of the Padma to Chilahati to Siliguri in India at the foot of the Himalayas. The construction of a bridge over the Padma became urgent for direct communication between Kolkata and North Bengal and Assam. In this context, the two-lane Hardinge Bridge was inaugurated on March 4, 1915 for rail operation. This made it possible to transport goods and passengers from Siliguri in North Bengal to Kolkata and other parts of India via Chilahati without changing vehicles. In 1920, with a view to further improve railway management, a 6 km private railway line operated by the Eastern Bengal Railway from Mymensingh to Jagannathganj Ghat was nationalized. After the partition of India on 14 August 1947, the Bengal-Assam Railway was divided between Pakistan and India. East Bengal and East Pakistan inherited 2,606.59 km. It is known as Eastern Bengal Railway (EBR). EBR gets 500 km broad gauge and 2,100 km meter gauge.

After the emergence of Bangladesh as an independent state, the name of the country's railways was changed to Bangladesh Railway , which inherited 2,656.63 km of railways and 48 stations. On 3 June 1982, the Railway Board was dissolved and its functions were transferred to the Railway Department of the Ministry of Communications and the Secretary General of the Department became the Director General. On 12 August 1995, the 9-member Bangladesh Railway Authority (BRA) was formed to provide policy advice to Bangladesh Railways and its chairman was the Minister in charge of the Ministry of Communications. As a result of the opening of Bangabandhu Bridge , East-West rail link from Jamtail to Ibrahimabad Broad Gauge Railway was started on 23 June 1996. The last was Maitri Express on 14 April 2007 The introduction of trains established a direct rail link between Dhaka and Kolkata.

In December 2011, the Ministry of Communications was dissolved and a new Ministry of Railways was formed. Suranjit Sengupta became the first minister in charge of the railway ministry . Then in 2012 Mujibul Haque got the responsibility of this ministry. Nurul Islam Sujon got new responsibility in 2019

Some of the features of Bangladesh Railway are the use of multiple railway gauges and the division of the railway into eastern and western parts through the rivers Brahmaputra and Jamuna. It is possible to cross this river with a bridge, Jamun Bridge, the construction of which was completed in 2003.

There are two general managers for the two regions, East and West, assisted by various specialized departments, who are responsible for operations, maintenance and financial management. The two general managers of the two regions are accountable to the Director General of Bangladesh Railway. Each region is further divided into two main operations departments, which include installation, transport, commercial, financial, mechanical, road and works, signal and telecommunications, electrical, medical, and security.

Bangladesh Railways has a 'Railway Training Academy' under the Rector, a 'Planning Cell' under the Chief Planning Officer, a 'Equipment Branch' under the Chief Equipment Controller, and an 'Accounts Division' under the Additional Director General to coordinate and advise on accounting and economic management activities in the two regions.

There is a factory at Pahartali in the east and a factory at Saidpur in the west. These are controlled by two departmental supervisors. There is also a locomotive factory under the control of Parbatipur CEO for general overhauling of broad gauge and meter gauge locomotives. It also has a railway training academy. There are diesel factories in Pahartali, Dhaka and Parbatipur. The coaches and wagons are maintained at the Syedpur factory in Nilphamari and at the Pahartali factory in Chittagong.

There are two railway divisions under the Government of Bangladesh:

The following information is an overall idea of ​​the scope of work of Bangladesh Railway.

In 2019, 40 EMD GT42ACl locomotives were ordered from Progress Rail Service.

The Diesel-Electric Multiple Unit (DEMU) train started its journey in Bangladesh for the first time on April 24, 2013.  A total of 20 sets of gauge demos are manufactured by Tangshan Railway Vehicle Co Ltd of China. Each set has 3 units. A set can accommodate 149 passengers and 151 passengers for a total of 300 passengers.  The train has a capacity of 480 horsepower and a top speed of 60 km / h. This train can cover a maximum distance of 20 km. Their economic life span is 30 years.  Currently only 9 out of 20 sets are active.

Bangladesh Railway provides various services. There are also shuttle services for university students and freight trains. However, Bangladesh Railways still fails to make a profit as they provide services at subsidized rates for the economic benefit of the people.

Most trains do not have a heating class. Intercity and long-distance trains have food and power cars connected. Some intercity trains are partially air-conditioned and have berths attached. And the trains also provide the necessary sheets, pillows, blankets and food to the passengers. Some diesel-electric multiple units (DEMU) provide train commuter service.

The fare of Bangladesh Railway is relatively less than the fare of a bus. Ticketing service is available at almost all the stations in Bangladesh. At the same time, e-ticketing has been introduced in some very important stations. Through which it is possible to book and purchase tickets online or through mobile phones. Most station ticketing systems are computer controlled and connected to a central network. Passengers are given printed tickets after ticket purchase. Tickets can be purchased up to ten days prior to departure. Up to 48 hours prior to departure time 100% of ticket price (excluding clerical charges) is refundable.

As a national carrier, Bangladesh Railway is obliged to carry essential goods such as grains and fertilizers in remote areas of Bangladesh. Bangladesh Railway transports containers from Chittagong Port to Dhaka Inland Container Depot, where there are custom facilities.  Container-carrying rolling stock is made from existing rolling stock. A separate container train service was launched on 5 August 1991. A freight train runs from Singhabad and Petropol in India to Benapole and Rohanpur in Bangladesh.