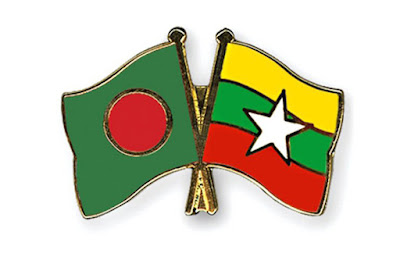 Under the Burmese military junta , there was a normal relationship between Bangladesh and neighboring Myanmar , although the presence of more than 260,000 Rohingya refugees in Bangladesh remains a major problem. Bangladesh's civil society and political class have almost always expressed solidarity for the struggle for democracy in Myanmar. However, Bangladesh wants to further improve trade, road and rail network with Myanmar to improve economic relations between the two countries.

In December 2016, the Bangladesh Border Guard was quoted as saying that four Bangladeshi fishermen were shot dead by the Myanmar navy in the Bay of Bengal.

Operation Clean and Beautiful Nation was a military operation conducted by the Tatmadaw (Myanmar Armed Forces) in northern Rakhine State, near Myanmar's border with Bangladesh in 1991. In December 1991, Tatmadaw soldiers crossed the border and accidentally fired on a Bangladeshi military outpost, resulting in Bangladesh Army aiding Rohingya Solidarity Organisation as retaliation. The conflict ended in Burmese tactical failure.

On October 7, 1998 between three and five Bangladeshi fishermen were killed by Burmese Navy forces just off the coast of St. Martin's Island.

On September 8, 1999 one Bangladeshi fisherman was shot and killed by Burmese Navy forces near St. Martin's Island. Nine crewmen from the victim's fishing boat abandoned it, swam for their lives, and were rescued by Bangladeshi forces. The Bangladeshi government lodged a formal protest note to Myanmar.

On August 20, 2000 the Bangladeshi police reported that Burmese border guards had shot and killed four Bangladeshi fishermen off the coast of St. Martin's Island.

Bangladesh and Mynamar engaged in border skirmish near NAF river during 2000, often termed as NAF War. The conflict resulted in death of over 600 Burmese soldiers with no casualty on Bangladesh's side.

In November 2008, the relation between two countries deteriorated further after Bangladesh–Myanmar naval standoff, a result of Myanmar allowing the South Korean company Daewoo to explore the seabed in an area 50 nautical miles south-west of St. Martin's Island, he area that was contested between Bangladesh and Myanmar as part of their respective exclusive economic zones.  Myanmar deployed two naval warships to protect its assets. Citing international law, Bangladesh asserted that Myanmar should not allow exploration activities in disputed territories until a resolution. After Bangladeshi requests were not heeded, the Bangladesh Navy deployed three warships in the area; the BNS Abu Bakr, BNS Madhumati and BNS Nirbhoy, and Bangladesh Air Force deployed Mig 29. As a result, Myanmar withdrew its warships and Daewoo began to remove its equipment from the area. In 2012, International Tribunal for the Law of the Sea granted the disputed area to Bangladesh, resulting in both tactical and strategic victory for Bangladesh.

In December 2016, the Bangladeshi border guard accused the Myanmar Navy of firing on four Bangladeshi fishermen in the Bay of Bengal, leading to a formal protest.

On 6 October 2018, the Government of Myanmar updated its 2015-2018 map of Myanmar Information Management Unit showing St. Martin as a part of their sovereign territory and spread the maps in two global websites. Following the event, the Myanmar Ambassador in Dhaka was summoned by the Government of Bangladesh on 6 October 2018. Rear Admiral (retd) M Khurshed Alam, maritime affairs secretary at the Ministry of Foreign Affairs, Government of Bangladesh handed over a strongly worded protest note to him. The Myanmar envoy said it was a “mistake” to show St. Martin's Island as part of his country's territory.