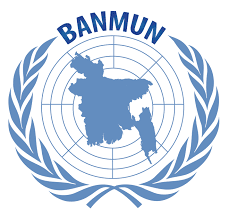 Model United Nations (also known as Model UN or simply Moon) is an educational imitation that sheds light on civic, communications and multilateral diplomacy. During the UN Model Conference, students take on the role of foreign diplomats and participate in simulated sessions of an intergovernmental organization (IGO). Participants research a country and play a role in the diplomacy of that country. They investigate, debate, deliberately consult or advise on international issues and then solve various problems in the world.

The Bangladesh Model United Nations is an academic simulation of the United Nations aimed at educating citizens about effective communication, globalization and multilateral diplomacy.

After successfully hosting three UN conferences, UNSAB set out in 2011 to organize the Bangladesh Model UN for university and school level students. In 2011 UNYSAB Bangladesh Model United Nations 2011 was organized.

Bangladesh Model UN has gained experience of five conferences so far.Another episode of the conference is the sixth session of the association on June 24, 2014. Model UN on Terrorism The first UN conference was held from October 24 to 26, 2002 at the Islamic Development Bank Auditorium in Dhaka. The second conference was organized in October 2003 in collaboration with UNC and the topic of discussion was HIV / AIDS. Barrister Jamir Uddin Sarkar, Speaker of the National Assembly of Bangladesh was present as the Chief Guest, Prof. Dr. Mohammad Asaduzzaman .