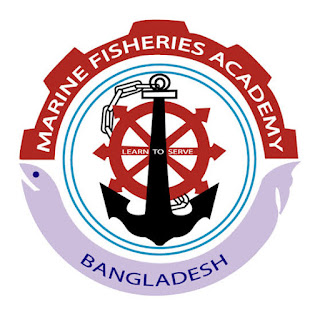 The Marine Fisheries Academy (MAF)  or the Bangladesh Marine Fisheries Academy (BMFA)  is a training institute of the Government of Bangladesh for cadets interested in entering the fisheries, merchant ships and other related maritime industries. It is the only government educational institution in Bangladesh to train cadets, deck officers and marine engineers of commercial ships from different countries of the world and to acquire skilled and qualified marine fishermen for climbing and processing the vast marine fishery resources of Bangladesh's huge blue economy. Cadets are made. It was established in 1973. It is a national organization providing training only for these organizations. Most of its ex-cadets have graduated from the Marine Fisheries Academy and are working on overseas ships. Many are teaching at world-renowned universities with PhDs. Many are working as officers in various marine industries around the world. He is working with great dignity and respect even in the industrial service of Bangladesh. Many of the cadets of this academy are showing equal skills as government officials with BCS. Many have joined the Bangladesh Navy and are working efficiently.

The company is located in Ichanagar area of Char Patharghata union under Karnafuli upazila of Chittagong district in Bangladesh.

After the independence of Bangladesh, Father of the Nation Bangabandhu Sheikh Mujibur Rahman established the Marine Fisheries Academy in Bangladesh in 1973 with the help of the then Soviet Union to explore the vast sea resources of Bangladesh. Many of the cadets from the academy at the Soviet Union Scholarships are working successfully in their respective fields with higher degrees abroad. Launched on September 1, 1983 under the Bangladesh Fisheries Development Corporation (BFDC), it came under the administrative control of the Ministry of Fisheries and Animal Resources on April 20, 1986. But on July 1, 1993, it was transferred to the revenue budget under the same ministry. Since then, the academy has been operating under the administrative control of the ministry. The executive authority of the academy is vested in the principal, who has three affiliated organizations, namely: the Academic Council, the Board of Studies and the Board of Decisions.

This institute offers professional undergraduate (honors) courses under Bangabandhu Sheikh Mujibur Rahman Maritime University .  All these recognized courses are recognized in Bangladesh and elsewhere. The total duration of training of cadets is four years. 1st and 2nd year training is conducted in the academy to include the theoretical aspects of professional and academic subjects. At the end of each year, they participate in the final examination of the year conducted by Bangabandhu Sheikh Mujibur Rahman Maritime University. The 3rd year covers other industry training, practice and support courses. Upon successful completion of this course, they participated in the final examination under Bangabandhu Sheikh Mujibur Rahman Maritime University. The Marine Fisheries Academy then awards the graduation certificate upon passing the training.