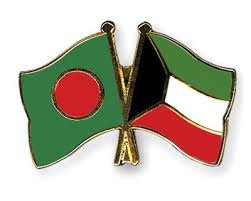 Bangladesh-Kuwait relations refer to the bilateral relations between Bangladesh and Kuwait .

The Emir of Kuwait Sabah Al-Salim Al-Sabah visited Bangladesh in 1974. Bangladesh has a resident embassy in Kuwait. After Iraq invaded Kuwait in 1991, Bangladesh sent troops to the United Nations-led Operation Desert Shield to defend Saudi Arabia . Bangladesh also fought in the first Gulf War as part of an international alliance . After the war and in the mine clearing operation, the Bangladesh Army lost 59 soldiers. By 2016, 628 Bangladeshi soldiers had been killed and 152 others wounded in the Gulf War under "Operation Reconstruction of Kuwait" to clear landmines left by Iraqi forces. In March 2016, the two countries signed an agreement to allow holders of each country's diplomatic passports to travel without an entry visa. The Kuwaiti NGO Revival of Islamic Heritage Society was banned in Bangladesh for financing terrorism.