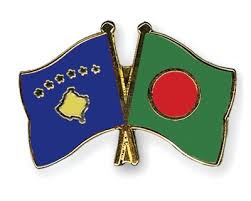 Bangladeshi- Kosovo relations are the foreign relations between Bangladesh and Kosovo . Bangladesh recognized the Republic of Kosovo as an independent state on 27 February 2016. A year later on the same date, Kosovo Consul in New York Tiuta Sahatkija and Masood bin Momen, Permanent Representative of Bangladesh to the United Nations, formally signed an agreement to establish diplomatic relations.

In response to the Declaration of Independence

On June 29, 2006, Fakhruddin Ahmed , Chief Adviser to Bangladesh, and James F., US Ambassador to Bangladesh. During the meeting with Moriarty, he confirmed that "Bangladesh will recognize the new European country." The Chief Adviser also assured the US Ambassador that " Asian Muslim countries [ sic ] committed to lobbying Bangladesh will recognize Kosovo. Bangladesh will actively contribute to Kosovo's development". Following a meeting between Iftekhar Ahmed Chowdhury, an adviser to the caretaker government of Bangladesh, and Moriarty on 16 December 2007 , the media was told that the question of Kosovo recognition was "under active consideration by the Bangladesh government".  Foreign Secretary of Bangladesh at a press briefing on 22 August 2009"At the moment we do not feel the need to recognize Kosovo," said Mohamed Mizarul Kayes . He said his government would consider "many issues" before making a decision. "If we can recognize Kosovo, we must take sides. If we don't, we are not taking sides," he said. In a meeting with US Ambassador Moriarty on November 15, 2009, Kayes said that an independent decision would be taken to recognize Kosovo as Bangladesh, taking into account the country's national interests. It is learned that Bangladesh has not yet recognized Kosovo due to its focus on strengthening relations with Moscow - Russia has formally requested Bangladesh not to recognize [Kosovo].  On May 13, 2010, Bangladesh's Foreign Minister Dipu Moni said that her country would decide whether to recognize Kosovo's independence after the International Court of Justice reached a decision on the matter.  After a meeting with the Prime Minister of Bangladesh in September 2010, Albanian Prime Minister Sali Berisha said that Bangladesh had promised to take a positive decision on recognizing Kosovo.  After speaking at the University of Ankara in April 2012 , Bangladeshi Prime Minister Sheikh Hasina said in response to a question about recognizing Kosovo, "We have already discussed the matter and are monitoring the situation in Kosovo. You will hear good news soon."  In December 2013, the OIC Special Representative for Bangladesh said that Kosovo's recognition would be taken seriously.