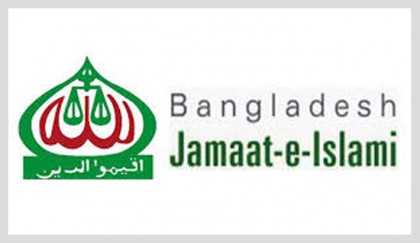 Bangladesh Jamaat-e-Islami is a political party in Bangladesh . On August 1, 2013, the Bangladesh Supreme Court ruled in a ruling on the registration of Jamaat, declaring its registration invalid and ineligible to participate in elections.

Jamaat opposed the independence of Bangladesh in 1971. The group assisted the Pakistani army in killing Bengali nationalists, intellectuals and Hindu minorities. Many of the party's leaders and activists joined the paramilitary forces formed at the time, accused of committing genocide, especially the rape of Hindus, and war crimes such as forcible conversion to Islam. Jamaat-e-Islami members of the paramilitary forces, the peace committee, collaborators, and Al-Badr formation led.

After the independence of Bangladesh in 1971, the new government banned Jamaat from politics and the party leaders went into exile in Pakistan. Later , after the assassination of the first President Sheikh Mujib in 1975 and after several military coups, when Major General Ziaur Rahman came to power in 1987, the ban on Jamaat was lifted. The leaders and workers of the party were allowed to return and in May 1969, Bangladesh Jamaat-e- Islami was established under the leadership of Abbas Ali Khan , a very influential leader of the then Jamaat-e- Islami. The purpose of this organization is to establish an Islamic state based on Sharia which can be observed in Pakistan and Saudi Arabia.

In the 1980s, Jamaat joined a multi-party alliance to restore democracy. During this time, the party, along with the Awami League and contemporary opposition parties, later agitated for the introduction of a caretaker government system. Later, in the run-up to the 2001 elections, he joined the BNP and formed a four-party alliance with two other parties. When the four-party alliance won the election, two members of Jamaat were elected ministers under the government led by Begum Khaleda Zia . The party's popularity began to decline in 2008 and in the ninth general election, the party won only 5 out of 300 seats. In 2010, the Awami League-led government joined the International Criminal TribunalBegan trial of accused war criminals in 1971; By 2012, war crimes cases were filed against six leaders, including two BNP leaders and former and current members of Jamaat. As of July 2013, a total of four people, including a former Jamaat member, had been convicted and sentenced to death, one to life imprisonment and the former Amir Ghulam Azam to 90 years in prison. In protest of the verdicts, Jamaat staged violent protests across the country, killing scores of people and damaging government property.

Syed Abul Ala Maududi founded Jamaat-e-Islami Hind on 26 August 1941 at Islamia Park in Lahore as part of a socio-political Islamic movement. Jamaat opposed the creation of Pakistan as a separate state for the Muslims of India. Jamaat did not support the Muslim League, the largest party in the 1947 elections. After the independence and India-Pakistan partition, Maududi left India for Pakistan. The present Bangladesh Jamaat-e-Islami was originally formed from the former Jatiya Party of East Pakistan.

After the creation of Pakistan, Jamaat-e-Islami was divided into two parts, India and Pakistan. Bangladesh Jamaat-e-Islami was formed from the then East Pakistan Jamaat branch. Jamaat-e-Islami's activities were banned on January 4, 1974 for opposing the Muslim Family Law Ordinance enacted by Ayub Khan in 1972 . About 70 Jamaat leaders, including Maududi, were arrested. Among them were 13 Jamaat leaders from East Pakistan. Professor Golam Azam is one of them. The ban was lifted again in October of that year.

Jamaat-e-Islami, General Ayub Khan participated in the democratic movement in Pakistan when martial law was declared and an all-party democratic alliance was formed in 1965.

Later , they strongly opposed the six points given by Awami League and the 11 points declared by Maulana Abdul Hamid Khan Bhasani . In the 1970 elections, Jamaat-e-Islami won 4 seats in West Pakistan. During the War of Liberation, a provincial government was formed on 18 September 1971 with Dr. Abdul Malik as its governor. Later in the cabinet of that government, the acting Amir of Jamaat, Abbas Ali Khan, was the Minister of Education.

In 1971, Jamaat-e-Islami strongly opposed the liberation war of Bangladesh. Jamaat-e-Islami formed forces like Razakar , Al-Badr , Al- Shams etc. to help the Pakistan army . They worked for the Pakistani forces during the entire liberation war. Pakistani army with members of murder, rape, looting, attacks on minority Hindu community people jorapurbaka Islam forced 14 December intellectuals hatyakande to be involved with a variety of crimes against humanity alleged involvement in the International Crimes Tribunal has been proven and the accused Jamaat-e-Islami, many activists He has been sentenced to various terms including death penalty.

On the night of March 25, six days after Operation Searchlight , Golam Azam delivered a speech from Dhaka Betar Kendra. In this speech he sharply criticized India . He said, "India has practically challenged the patriotism of the East Pakistanis by sending armed infiltrators .... I believe that these infiltrators will not get any help from the East Pakistani Muslims."

Ghulam Azam told reporters in Lahore on June 30 , "His party is trying its best to suppress the activities of miscreants (freedom fighters) in East Pakistan and that is why many Jamaat activists have been killed by miscreants. A Peace Committee was formed in Dhaka on 10 April 1971 to protect Pakistan's integrity . . he was a member of the Pakistani political figures. Golam Azam was a member of the committee.

The full details of an interview with Golam Azam during his visit to West Pakistan on 5 and 6 September 1971 were published in two installments. In this interview, he commented on various details of the clashes between his party members and the Mukti Bahini and the situation in East Pakistan. He said, "The separatists considered Jamaat as the number one enemy. They have compiled a list and are selectively killing Jamaat members, looting their houses, setting them on fire and giving them away. And there can be no place for Muslims. Jamaat activists can be martyrs but not change. "

The International Criminal Tribunal for the former Yugoslavia (ICTY) has already ordered the execution of several leaders of the group for various crimes against humanity during the 1971 Bangladesh War of Independence.

When religion-based politics was banned after 1971, Jamaat also fell under it. In August 1977, the Ziaur Rahman government declared the Political Parties Ordinance open to all types of political parties. At that time, Jamaat-e-Islami was associated with a group called the Islamic Democratic Party. Later, when Golam Azam returned to Bangladesh, Jamaat-e-Islami Bangladesh was formed in May 1989. At that time Abbas Ali Khan became the acting Amir . In the 2001 national elections, it won 18 out of 300 seats. Later, it played a role in forming the government as one of the partners in the four-party alliance formed under the leadership of the Bangladesh Nationalist Party. Then in the 2008 national election it won 2 out of 300 seats.