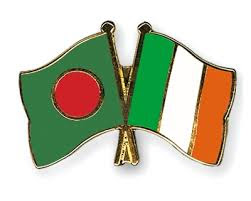 Bangladesh and Ireland have shown mutual interest in expanding bilateral economic activities between the two countries and both countries have taken necessary steps to expand existing trade and investment. Many Irish companies have expressed interest in investing in Bangladesh in the promising sector.

In 2009, an Irish trade delegation led by former Irish Minister for Investment and Coordination Conor Lenihan visited Bangladesh to explore possible ways to increase bilateral trade and investment. Ireland has shown interest in recruiting skilled IT professionals from Bangladesh.

There are small groups of Bangladeshi immigrants in Ireland. In 2014, 99 Bangladeshis applied for asylum in Ireland, and in 2015 the number rose to 231. Some Bangladeshis are illegal immigrants. Bangladesh-origin Maksuda Akhter won the Mrs. Ireland Beauty Pageant 2014.