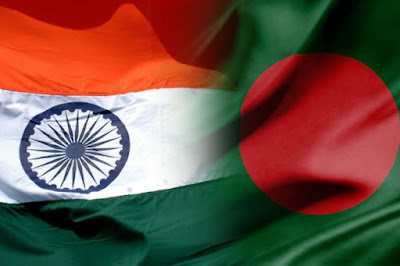 Bangladesh and India are two neighboring countries in South Asia . Bangladesh is a Bengali nationalist , nation state but India is a collective country of different nations. After the partition of Bengal in 1947, most of the Bengali inhabited areas are now part of India. The role of the Indian Bengali community and the Government of India In the 1971 Bangladesh independence movement against Pakistan is significant. Bangladesh-India relations are friendly in all respects, despite the fact that the Farakka Dam after 1971, the killing of Bangladeshis on the border, and theIndian aid to separatists in the Chittagong Hill Tracts are significant distances. The two countries are simultaneously SAARC , BIMSTEC ,Iowa and ordinary members of the Commonwealth . Bengalis live in the Indian states of West Bengal , Assam and Tripura who were forced to leave East Bengal (present day Bangladesh) after the riots of 1947-48 and Bangladesh became a part of Pakistan .

During the Bangladesh War of Independence in 1971, a strong alliance was established between the two countries. This relationship was further enhanced in the late 1970s and the various neurological wars of the eighties . With the onset of economic liberalization in South Asia, they led to greater growth and trade innovation. Subsequently, in 1996, a historic Ganges water sharing agreement was signed between the two countries . Both Bangladesh and India are playing a role as all-strategic counter-terrorism partners. As a result, they became the largest business partner in South Asia. Bilateral trade revenue is estimated at more than $ 6 billion.

India has cultural, social and economic ties with Bangladesh. The history, culture, linguistics, traditions of the two countries and their passions towards art and culture are almost identical and similar. During the Bangladesh War of Independence in 1971, the two countries worked as close allies. Since the mid-1980s, India's relations with Bangladesh have deteriorated as Bangladesh has grown closer to Islamic states and has become a member of the OIC , and Bangladesh has become increasingly eager to reveal its Islamic identity around the world. The two countries fought a Cold War between themselves in the 1970s , which later turned into a cold bilateral relationship. On the eve of the economic liberalization of South Asia, further development of bilateral relations between them began. The historic Ganga Treaty was signed in 1997 between Bangladesh and India. Bangladesh and India became strategic partners in counter-terrorism operations. India-Bangladesh is the largest trading partner in South Asia.

Disputes between the two

In recent times, the killing of Bangladeshi nationals on the Bangladesh-India border has become an uncomfortable issue for bilateral relations between the two countries. According to Human Rights Watch , one thousand Bangladeshis died between 2001 and 2011 due to the BSF's so-called 'shoot for killing' policy .

The Indian Foreign Minister and the BSF chief took many oaths on behalf of the Government of India and pledged that such killings of the BSF would be stopped in the future. But ordinary Bangladeshi civilians continue to be killed by the Indian Army when they cross the border into India illegally or by mistake.

Bangladesh is outraged by the continued killings of the BSF and the subsequent deaths.  Indian officials have argued that higher security has led to a growing influx of illegal immigrants into India, as well as a growing influx of smugglers across the border . Indian officials have vowed to reduce the death toll at the border. The number of Bangladeshi deaths has stabilized in recent years.

The killing of Bangladeshi civilians by the BSF in this way started a so-called cyber war between the hackers of the two countries , which made the BSF website of India , the National Information Center and the Trinamool Congress website inaccessible. If the hackers accept defeat, Bangladesh will stop cyber attacks.

In September 2011, the two countries reached an important agreement to resolve the four-decade-old border issue. The agreement is called the Three Bigha Corridor Agreement. India agrees to allow Bangladeshi nationals to travel 24 hours a day through three bighas of corridors . The two countries also agreed to exchange enclaves located on their respective borders.

In 2012, Bangladesh allowed the use of Bangladeshi land for the crossing of heavy machinery, turbines and cargo required for the power plant under construction at Tripura by the Oil and Natural Gas Corporation of India.

In October 2013, India started exporting 500 MW of electricity to Bangladesh under a 35-year agreement. The 125 km long Baharampur-Bheramara transmission line, 40 km of which is located in Bangladesh, connects the substations of the two countries. The two countries agreed to set up a 1320 MW coal-fired power plant at Rampal in Bangladesh as a joint venture.

India-Pakistan Wagah border in November 013 as a Petrapole (India) - Benapole (Bangladesh) border points dibasamapti day event is being organized. The event includes parades, march-pasts and the lowering of the flags of the two countries.

On 7 May 2015, the Indian Parliament, in the presence of Bangladeshi diplomats, unanimously ratified the 1974 Land Boundary Agreement, the 100th Amendment to the Indian Constitution. As a result, the six-year dispute over the border between the two countries ended.

During Indian Foreign Minister Sushma Swaraj's visit to Bangladesh in June 2014, the following agreements were signed to improve relations with India:

India agrees to issue multiple tourist visas for five years to Bangladeshi nationals under 13 and over 65.

If any accused of murder has fled to India, he will be transferred.

Extending the time of Maitri Express and arranging bus services between Dhaka , Guwahati and Shillong

Bangladesh used its land and infrastructure to allow the transportation of food grains to landlocked north-east India .

In June 2015, Indian Prime Minister Narendra Modi visited Bangladesh and 22 agreements were signed between the two countries. A 200 million loan agreement was reached, and an investment of 500 million was announced. According to the agreement, Reliance Power of India agreed to invest  3 billion in setting up a 3,000 MW LNG-based power plant in Bangladesh. Adani Power will set up a 1,600 MW coal-fired power plant with an investment of Tk 150 crore.  The two countries signed a total of 22 agreements, including on maritime security cooperation, human trafficking and counterfeiting.

162 enclaves at midnight on 31st July 2015Through the exchange, 50,000 isolated citizens, who had no national identity, became citizens of India or Bangladesh. This exchange marks the end of a long history of deprivation. This exchange allows enclave residents to stay in the country they are in, or to become citizens of a neighboring country if they wish. The 51 enclaves of Bangladesh inside India had a population of 14,214, all of whom remained in India as Indian citizens. Of the 111 enclaves of India inside Bangladesh, most of the 41,000 inhabitants remain in Bangladesh, with only 989 migrating to India. As a result, the number of new citizens of India stood at 15,193 and the number of new citizens of Bangladesh stood at 41,449. As a result of this exchange, Bangladesh got 16,256 acres and India got 6,110 acres of land.

In 2016, the Prime Ministers of the two countries inaugurated the 130 km long "India-Bangladesh Friendship Pipeline" via video conference. 4 lakh metric tons of diesel will be sent to Bangladesh from India through this pipeline. In September 2017, the Cabinet of Bangladesh approved a draft agreement that would allow India to supply goods to its northeastern states using the seaports of Chittagong and Mongla in Bangladesh .

In April 2016, during Sheikh Hasina's four-day visit to New Delhi, Bangladesh and India signed two military agreements. This was the first military agreement of any country with India. According to the agreement, the two countries will jointly organize various trainings and exercises. India will assist Bangladesh in building the necessary infrastructure for the construction and repair of defense products used by both countries and will provide the necessary training, technology and logistics to the Bangladesh military. For the first time, India agreed to provide a  500 million loan to Bangladesh for the purchase of arms or military equipment in the military sector.

President Ershad visited India in 1982. Sheikh Hasina visited India in 2010 to sign various agreements. Manmohan Singh visited in 2011 and signed several agreements.  Narendra Modi paid a historic visit to Bangladesh in 2015, through which the issue of demarcation was resolved.

India is very active in the development of Bangladesh.

Recently, India has given interest to Bangladesh in various sectors. In 2011, a loan of  650 million was provided for infrastructure development.

In 2014, India provided a loan of US 1 billion for infrastructure development in Bangladesh.

Loan assistance of US 82 million was provided for purchase of various equipment from BHEL, RITES, India.

India has announced an investment of 10 million for Bangladesh in various small projects and ensured that trade inequalities are resolved expeditiously.

India and Bangladesh signed a memorandum of understanding to work together on health issues. The two countries have reached an agreement on various science-related instruments, information they will exchange with each other and will conduct joint research

800 crore trade between the two countries. This trade has reached 1000 crores through the port. In bilateral trade, India-Bangladesh trade in 2013-14 was  6.6 billion, with India earning 6.10 billion from exports and Bangladesh  482 million. Five years ago, the business was worth 2.7 billion, which has now doubled.

The Cabinet of Bangladesh redesigned the aforesaid system of trade with India, so that both countries could send goods to third countries using the land and waterways of the two countries. As a result, regional boundaries will not create any barriers. Due to this agreement, India will be able to export goods to Myanmar through Bangladesh. It has made such a provision; As a result, if there is no objection from any country, this system will remain in force automatically even after 5 years.