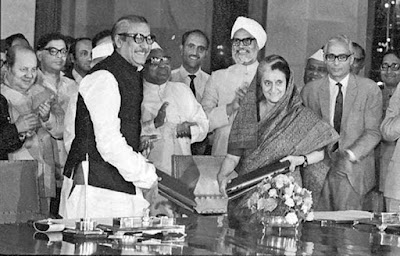 Bangladesh-India Friendship Agreement 1972 is a 25-year agreement signed in Dhaka on 19 March 1972, just three months after the establishment of Bangladesh. The title of the agreement is "The Indo-Bangla Treaty of Friendship, Cooperation and Peace" which translates to the Indo-Bangladesh Treaty of Friendship, Cooperation and Peace . The agreement was signed by President Sheikh Mujibur Rahman on behalf of Bangladesh and Prime Minister Indira Gandhi on behalf of India . There were 12 clauses in this agreement. The contract was renewable for a period of 25 years.The agreement expires on March 19, 1997, and has not been renewed.

The requirements of the agreement

The introduction to the contract outlines the requirements for formulating and executing the contract. Inspired by the same ideals of peace, secularism, democracy, socialism and nationalism, the victory of a free, independent and sovereign Bangladesh with the pledge to strengthen the bonds of friendship through simultaneous struggle, blood donation and self-sacrifice. With a firm resolve to transform the borders of both states into borders in lasting peace and friendship; From neutrality, peaceful coexistence, mutual cooperation, refraining from interfering in each other's internal affairs and firmly relying on the principles of respect for territorial integrity and sovereignty; Peace, For the advancement of their respective countries with a firm determination to maintain stability and security and through all possible forms of mutual cooperation; With a firm determination to further expand and strengthen the existing friendly relations between the two countries; Believing in further expansion of mutual friendship and cooperation in the interest of lasting peace in Asia and the world and in the national interest of both countries; Decided to make efforts to defuse international tensions and to eradicate the last vestiges of colonialism, apartheid and feudalism in order to strengthen world peace and security; Be convinced that the solution to the international problems of today's world is possible only through cooperation, not through enmity and conflict;

Description of the agreement

Inspired by the ideals for which the people of their respective countries have simultaneously struggled and sacrificed their lives, both parties to the treaty are unequivocally declaring that lasting peace and friendship will be maintained between the two countries and their peoples. Respect each other's independence, sovereignty and territorial integrity and adhere to the principle of non-interference in each other's internal affairs. The development of the existing friendly friendly neighborly overall cooperation and relations between the two countries will be further strengthened on the basis of the stated principles and principles of equality and mutual benefit.

Guided by the principle of equality for all states and peoples, irrespective of race or religion, the high-ranking parties to the treaty condemn all forms of colonialism and caste discrimination and reiterate their commitment to work for its final and complete eradication. Both the high-ranking parties to the treaty will co-operate with other states in achieving the above objectives and will give unwavering support to the just hopes and aspirations of the people in the struggle against colonialism and caste discrimination and national liberation.

Both high-ranking parties to the agreement reaffirm their unwavering confidence in the principles of non-alignment and peaceful coexistence as important elements in easing world tensions, safeguarding international peace and security, and strengthening national sovereignty and independence.

High-level parties to the agreement on international issues of mutual interest will hold regular meetings and exchange views at all levels.

The high-ranking parties implementing the agreement will strengthen and expand mutual benefits and overall cooperation in the economic, scientific and technical fields. The two countries will expand cooperation in trade, transport and communication on the basis of principles of equality, mutual benefit and the highest favored state.

The high-ranking parties to the treaty agreed to conduct joint surveys and take joint action on flood control, river basin development and hydropower and irrigation systems.

The high-ranking parties to the agreement will seek to develop relations in the fields of art, literature, education, culture and sports.

According to the current friendly relations between the two countries, each of the high-ranking parties to the treaty is declaring with justice and sincerity that they will not be bound by any military agreement against each other. The high-ranking parties to the treaty shall refrain from attacking each other and shall not allow them to do anything on their territory that could harm the defense of any party to the treaty or be considered a security threat to either side.

In the event of a third party engaging in armed conflict against one of the parties, each of the two parties to the treaty shall refrain from providing any assistance to such third party. In addition, if any party is attacked or threatened to be attacked, the two sides will meet on an urgent basis to take appropriate active measures to ensure peace and security in their respective countries.

Both high-ranking parties to the treaty sincerely declare that neither party shall enter into any agreement with one or more states, either secretly or openly, which may be inconsistent or harmful with the treaty.

The agreement was signed for a period of twenty-five years. The term of the contract may be extended by mutual consent of both parties executing the contract. This agreement will be effective from the day of signing.

Any disagreement between the two parties to the agreement on the actual meaning of one or more of the terms of this agreement must be settled peacefully through mutual respect and agreement.

The agreement carries special significance because of its foreign and defense-related conditions. Article 6 states, "No country shall join any military alliance against another country and conduct any military operation against another country and its land, water and air borders are a threat to the military loss of another state or to the unity of another state." It cannot be used for any purpose. ”On the other hand, Article 9 states,“ No party shall provide any assistance to any third party in any military conflict against another party. If either party is attacked or threatened with aggression, the two parties will immediately take appropriate action through mutual negotiations to deal with the threat of attack or aggression. In this way, peace and unity of the two countries will be maintained. ” As described in paragraph 10,