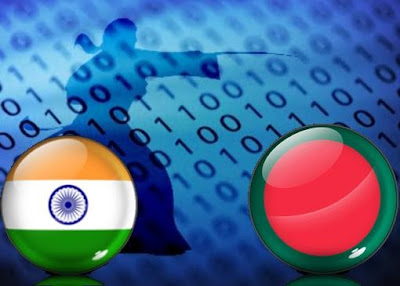 The Bangladesh-India Cyber ​​War refers to the hacking activities that took place on the Internet in early 2012 . Although such cyber-wars took place in Estonia in 2007 ,similar incidents are not uncommon between the two countries. Bangladesh - India, the onset of this event is essentially, January 9, AD 01 and 10 ,a Bangladeshi border of the Indian Border Security Force ( BSF ) by the naked torture center. But it was not the only reason, in fact, more contemporary border killings and the Tipaimukh dam by the Indian government.The decision to build was also the fuel of this cyber-war. The three hacker groups behind the cyber attack, who identified themselves as Bangladesh Black Hat Hackers , Bangladesh Cyber ​​Army and Expire Cyber ​​Army , acknowledged their achievements. The group also mentions the involvement of the world-famous hacker group Anonymous . It is also reported that hackers from Pakistan , Indonesia and Saudi Arabia are supporting Bangladeshi hackers.However, they later admitted their mistake and claimed that the information came from the brains of overzealous supporters.However, the India-Bangladesh border just preach the news of the killing, cyber-warfare experts believe that the main purpose.

At the same time, the Indian hacker-group also counter-attacked in this attack, led by a hacker group called Indishel .Along with these, the Indian Cyber ​​Army also announced its involvement.

Habibur Rahman, a resident of Atarshia village in Shibganj upazila of Chapainawabganj, was handcuffed by BSF men on suspicion of smuggling cattle across the Indian border and brutally beaten with rifle butts and sticks. According to Habibur Rahman, he was abducted on December 9 by BSF members at the Maurusi border post in Murshidabad district of West Bengal. At that time, the BSF soldiers demanded two thousand rupees, five flashlights and a mobile phone from him. But as they could not pay, the BSF members tied them up all night after the torture. The next day, on December 10, at around 4:30 in the morning, he was tortured again. The BSF jawans tore off his lungi, tore it in two, tied his hands with sticks and started beating him in the second round. They beat the whole body, including the genitals, with the butts and sticks of seven rifles. When he lost consciousness at that time, he left a mustard on the side of the border to eat. The incident sparked an outcry among Bangladeshis when an 11-minute video was released on YouTube with a mobile phone. Even various Indian human rights organizations became vocal against it. Angered by this incident, the hacker groups of Bangladesh decided to launch a cyber-attack against such barbarism in India. Each of the six constables was given 69 days in jail in a top-secret BSF court to try the case. The commander-in-chief involved in the incident has been demoted to the rank of general constable. However, he was not imprisoned. Despite this judgment, this cyber-war continues, because many did not consider this judgment fair. Even Indian human rights organization emaeesaiuema short Masum, this trial did not feel enough.

BGB Habildar Lutfar Rahman, who was on patrol, was abducted on January 20 from the border of Dalkuia village in Galiyara union of Comilla's Dakshin upazila when the incident of border torture was at its peak . BGB members to return abducted on January 1 wounded after two hours of Jessore SharshaA Bangladeshi named Rashedul was killed and three others were injured in BSF firing at Dhanyakhola border. These incidents of border torture and killings are reminiscent of many old tortures and border killings. According to media reports, more than a thousand Bangladeshis have been killed by the BSF in the last 10 years. Of these, 94 Bangladeshis were killed in 2001, 105 in 2002, 43 in 2003, six in 2004, 104 in 2005, 146 in 2006, 120 in 2006 and 72 in 2006. According to the Human Rights Report-2011 of the human rights organization Odhikar , 2009-2011, 203 Bangladeshi nationals were killed by the BSF in these three years. Of these, 97 were in 2009, 64 in 2010 and 31 in 2011, including 15-year-old Felani. At the same time, 98 people were seriously injured in the BSF attack, at least 1,000 were abducted and more than 200 were missing. Odhikar 's report on border killings further states that unarmed men and women and children are either shot dead or tortured by the BSF. The BSF has even infiltrated the Bangladesh border and shot dead a farmer working on agricultural land. On January 8, 2011, BSF shot dead a 15-year-old girl named Felani while she was returning to Bangladesh from India near 946 International Border Pillar at Anantapur border in Phulbari upazila of Kurigram district and took her body to India after hanging her with a barbed wire for five hours.With the release of these figures, the issue of the right share of the Titas River and the Tipaimukh Dam came up along with the past. And in this context, this cyber-war is calmed down.

Since Bangladeshis are persecuted by India, it is thought that Bangladeshi hackers launched attacks on Indian websites, even at first it was reported in the media . From the night of 10 February 2012, a massive attack was carried out by Bangladesh. The Maharashtra police website hacked Indian websites are starting to attack. But the Bangladeshi hacker group later claimed that it was the Indian hackers who started the cyber war, in response to the counter-attack by the Bangladeshi hackers. In the early stages of the attack, Bangladeshi hackers hacked the website of the Indian Border Security Force (BSF) and made it completely ineffective.Later on February 12, Bangladeshi hackers also attacked BSF's alternative website (www.bsf.nic.in) and revealed its source code. They also attacked various government websites in India. In addition to these attacks, hackers continue to post detailed statements of their activities on their Facebook pages and various blog websites, revealing the addresses of hacked websites. On 9 February 2012, Bangladesh Black Hat Hackers released a video of the Government of India on the popular video sharing website YouTube.

The video shows a man in a mask and a black cloak sitting on the side of a table with a piece of paper in his hand. His words can be heard in the words of the instrument. The mask resembles the mask of Anonymous perfectly . The masked man made the statement:

“Hello citizens of Bangladesh, we are Bangladesh Black Hat Hackers . Now is the time to open our eyes. The BSF has killed more than a thousand Bangladeshi nationals and injured 98 more Bangladeshis. Thousands have been abducted. This is a crime against humanity. They are doing injustice. At this critical moment, as Bangladeshi citizens, we have some sense of responsibility, we want the Indian government to stop killing innocent Bangladeshis. Otherwise we will start a cyber-war against the Indians. It will continue.”

Formally announced the end of

Please help improve this article or section by expanding it . You can see the talk page for additional information . (April 2012)

Bangladesh-India Cyber ​​War has never officially come to an end.

Immediately after the BD Black Hat hackers announced the official end of the cyber war on their Facebook page, when another Bangladeshi was killed on the India-India border, the hackers jumped into the war again.

The way in which any cyber attack can happen, this cyber attack was also his follow-up. The DOS attack was also reportedly involved in the attack. Ping attacks, zombie attacks, and DDoS attacks were also reported to be active. In addition, sophisticated hacking methods including SQL injection, server root, symlink are used. However, SQL Injection and the DDoS method were the main ones.

According to BBC Bangla, quoting an Indian cyber security expert, most of the websites are for businesses and should not contain any sensitive information. The media reported that it was possible to re-launch all the websites that were hacked by both the parties.

The outcome of this cyber-war cannot be said with certainty as the government of any country has not officially released any list of their hacked websites. However, according to various media reports, more Bangladeshi websites have been hacked than Indian hacked websites. (Daily Prothom Alo reported on 13 February that the number of Indian websites hacked by Bangladeshis was about 300, while Indian hackers hacked 10,000 websites.  But whether that number was enough to officially declare a victory Considerable. However, since the hacking was primarily a protest against the Indian border killings, the protest was widely reported in the media and is believed to have succeeded.

In various forums, groups were initially advised to stay away from activities that could create unnecessary controversy by criticizing the internal lack of coordination and short-sightedness of the participants in the cyber war.As a result of this cyber-war, Bangladeshi and Indian online users have also become embroiled in controversy. In various online magazines and forums, the debate continues with each other's religions. The Bangladeshi media reported that the comments of the Indians were vulgar and the comments of the Bangladeshis were peaceful and polite. No such news was found in the Indian media.