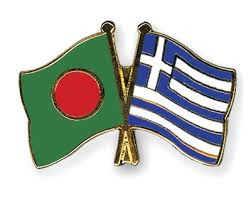 Bangladesh-Greece relations refer to the bilateral relations between Bangladesh and Greece . Diplomatic relations were established between the two countries in March 1972 after Greece became one of the first countries to recognize Bangladesh.

The Bangladesh Embassy in Athens was established in July 2009. Greece is run by a Consulate General in Dhaka .

As of 2009, there were about 20,000 Bangladeshi expatriates in Greece. The community is based in the capital, Athens .