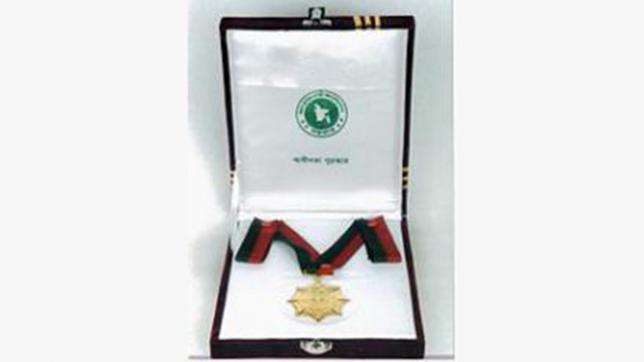 Bangladesh Freedom Honour The highest state honor given by the Government of Bangladesh to foreign nationals. Former Prime Minister of India Indira Gandhi was posthumously honored on July 25, 2011 . The award recognizes Bangladesh as its ally during the war of independence and its ability to conduct such complex regional wars.  He was nominated by a Bangladeshi national committee for "special honors" for "training the freedom fighters and providing shelter to millions of people fleeing the country and for their" unique "role in shaping world opinion for Bangladesh's independence."  Indira Gandhi's daughter-in-law Sonia Gandhi, President of the Indian National Congress PartyPrime Minister Sheikh Hasina and about a thousand eminent personalities received the award from the President of Bangladesh Zillur Rahman at a grand ceremony in Dhaka .

The award included a crest weighing three kilograms, a ' Kadam tree ' made of gold on a 400-year-old terracotta , and a quote:

"Mrs. Indira Gandhi has been by the side of the people of Bangladesh since the beginning of the Liberation War despite various adversities. She sheltered nearly one crore Bangladeshi refugees. She faced various diplomatic obstacles and gave courage to the Liberation War. Will be remembered forever. "

During the Bangladesh War of Liberation in 1971, the Pakistan Army carried out massacres against the Bengali population in East Pakistan, especially targeting the Hindu minority,   resulting in about 10 million  fleeing East Pakistan to neighboring Indian states. Take refuge. The East Pakistan-India border was opened to provide safe haven to refugees in India. General Tikka Khan of the Pakistan Army earned him the nickname 'Banglar Bachar' due to his extensive persecution. The Indian government repeatedly appealed to the international community, but failed to respond, Prime Minister Indira Gandhi expressed her full support for the freedom struggle of the people of East Pakistan on March 26, 1971 .

The Indian leadership, led by Prime Minister Gandhi, quickly decided that it would be more effective to stop the genocide by taking armed action against Pakistan than by simply sheltering those who had crossed the refugee camp into Pakistan . Exiled East Pakistan Army officers and members of the Indian intelligence service immediately began using the camps to recruit and train freedom fighters . On 3 December 1971, the Pakistan Air Force (PAF) launched a preemptive strike at Indian Air Force bases. The attack was modeled on the Israeli Air Force's Operation Focus during the Six-Day War and was aimed at the Indian Air Force.Neutralize the planes on the ground. India saw the strike as an open act of unspoken aggression. It was instrumental in formalizing the Indo-Pakistani war .

Six Indian corps were involved in the liberation of East Pakistan and Bangladesh. Along with them about three brigades of the Mukti Bahini fought and many more fought irregularly. It was much more advanced than the three divisions of the Pakistani army .  The Indians quickly overrun the country, either by choice or bypassing the lightly fortified strongholds. The Pakistani forces were unable to effectively counter the Indian attack as the Mukti Bahini deployed small units around the border to deal with the guerrilla attacks.  area, unable to protect the Pakistanis surrendered on December 16, 1971.