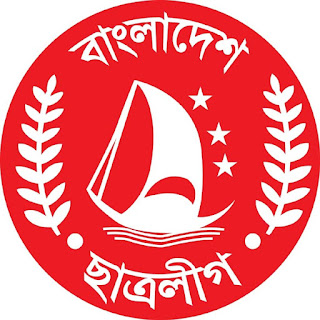 Bangladesh Chhatra League is a major political student organization in Bangladesh. It was formed shortly after the emergence of East Bengal in the partition of India . It is recognized as a fraternal organization of Bangladesh Awami League .

Bangabandhu Sheikh Mujibur Rahman founded the Bangladesh Chhatra League on 4 January 1948 at the Assembly Hall of Fazlul Haque Hall of Dhaka University . At the time of its establishment it was called East Pakistan Muslim Chhatra League .  Since its inception, Bangladesh Chhatra League has played a leading role in various rights movements in Bangladesh at different times . Notable among them are the state language movement , right to education, establishment of Bengali autonomy, mass uprising, independence and freedom movement. Naimuddin Ahmed acted as the founding convener and Dabirul Islam was later nominated as its organizational president. Khaleq Newaz Khan was the founding general secretary of Chhatra League.

Sheikh Mujibur Rahman demanded 6 points of 1966, which was the certificate of liberation of the Bengali nation. In this context, the independence movement of Bangladesh gained momentum. Bangabandhu was inspired by the movement of the leaders and workers of Chhatra League at that time.

The then East Pakistan Chhatra League played a historic role in the historic mass uprising of 1969 . In 1969, the students of Bengal formed a massive mass movement against Pakistan for the independence of Bangladesh, which took the form of a mass uprising. The then BCL leader Tofail Ahmed on behalf of the student community of Bengal gave the title of 'Bangabandhu' to Sheikh Mujibur Rahman, which accelerated the pace of the great war of independence in 1971.

Chhatra League played a leading role in the democratic movement. The role of Bangladesh Chhatra League in the anti-authoritarian movement is commendable. Universities play a leading role in the anti-authoritarian movement. In the continuation of which the dictatorial government fell and the democratic government emerged.

During 1/11, Bangladesh Chhatra League formed a mass movement demanding the release of all students and teachers including Sheikh Hasina. Following which, all the political prisoners were released in the democratic process and the democratic government started with an election in 2008.

The newly elected president Rezwanul Haque Chowdhury Shovon and general secretary Golam Rabbani led the organization at the national conference of Chhatra League on July 31, 2016. Due to the controversial activities of the two central leaders, on September 14, 2019, Al Nahyan Khan Joy was removed from the post of acting president and Lekhak Bhattacharya took over as the acting general secretary. At the next council they were made regular presidents and general secretaries.

The name of this organization of the students of Bangladesh is “Bangladesh Chhatra League” and in English “Bangladesh Students League”, abbreviated as Chhatra League in Bengali and “BSL” in English. On its national basis, the highest committee, the Central Executive Parliament, is abbreviated as the Executive Parliament. The highest policy-making forum of the organization is called the Central Committee (formerly the National Assembly).

Chhatra League is led by the president and general secretaries. They were elected in various ways including the National Conference, the meeting of the Central Executive Committee of the Awami League. The following is a list of leaders from the beginning of Chhatra League:

Chhatra League is associated with various activities. In 2020, Chhatra League started activities to raise awareness about coronavirus.These included the distribution of relief items to the poor, health care for doctors on mobile phones , the delivery of medicines to the homes of the sick, Iftar during the holy month of Ramadan, and  free ambulance services. Soap and water have also been provided for washing hands at campuses, mosques, markets and corners. Besides, the leaders and workers of different regions have cut the paddy free of cost so that the paddy of the farmers in different parts of the country is not wasted.

In the past, Chhatra League has been criticized for the activities of its various leaders and workers.

The assassination of Abu Bakr

Abu Bakr was a third year student of the Department of Islamic History and Culture at Dhaka University. He died on February 1, 2010 after being injured during a clash between two factions of the BCL over a seat at Sir AF Rahman Hall.

Jubayer Ahmed was a student in the English department of Jahangirnagar University. He died on January 8, 2012, a day after he was injured in an opposition attack in the Chhatra League. Five were sentenced to death and two to life in prison.

There are allegations against Chhatra League for being involved in destructive and illegal activities at different times.In Bangladesh, the student body became the focus of discussion in the country when some members of the organization caught a tailor named Biswajit with a sharp weapon during the strike, caught on camera by several TV channels. Biswajit died on the way to the hospital.

Later, the government filed a case against some BCL activists involved in the incident. Eight out of 21 activists of Jagannath University Chhatra League were sentenced to death in the Biswajit Das murder case. The court sentenced the remaining 13 to life imprisonment and fined them Tk 20,000 each.

On the night of February 8, 2016, Salimullah was tortured by the leaders and activists of Chhatra League. The cornea of ​​his eye was severely damaged.

After the quota reform movement started in April, on April 9, Bangladesh Chhatra League, a student organization of the ruling party Awami League , marched against the protesters at Dhaka University and attacked the protesters at different times.

Abrar Fahad, a second-year student in the Department of Electrical and Electronic Engineering at BUET, was allegedly beaten to death by several leaders of the university's Chhatra League on suspicion of involvement with the Shibir. Law enforcement suspects the 22-year-old student of the university's electrical and electronic engineering department was attacked because of a recent Facebook post that appeared to be critical of some of Bangladesh's recent agreements with India.