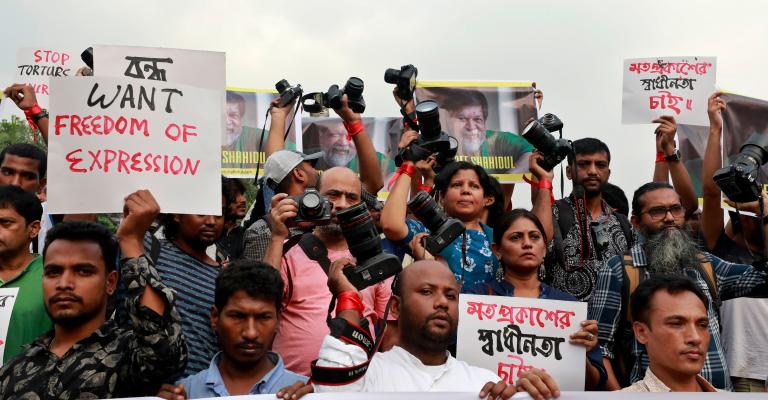 Protests and rallies have been held all over the world for freedom of speech in Bangladesh . Protest rallies were held around the embassies of Bangladesh in different countries of the world. These programs demanded the release of four bloggers arrested in Bangladesh. These four bloggers are imprisoned in Bangladesh on charges of blasphemy . The protest rally was organized by the Center for Inquiry (CFI), American Atheists, and the International Humanist and Ethical Union from April 25 to May 2, 2013. Similar protests were held in Dhaka, New York City, Washington DC, London and other countries around the world.  Secularists declare their solidarity with jailed bloggers. Bloggers shared their thoughts on religion. Those are freedom of speech This movement became popular among them. They continue to lobby for the release of those bloggers through international pressure.

The background of this movement started in 2013 in Shahbag, Dhaka. There was a movement in Shahbag demanding the maximum punishment for Abdul Quader Mollah , a leader of the Bangladesh Jamaat-e-Islami and a war criminal of the Bangladesh independence movement . During this movement, a blogger named Ahmed Rajib Haider was killed. He was a strong critic of Bangladesh Jamaat-e-Islami. Then, on March 7, 2013, he became another writer known as the "Atheist Prophet". He was also a writer, blogger and online activist.

Some Muslim organizations, such as Hefazat-e-Islam , call bloggers anti-Islamic and demand punishment for those who insult Islam . They declared those who were protesting in Shahbag as atheists.

In the wake of these incidents, Bangladesh formed a committee to monitor whether religion was being insulted on various social media. They shut down some blogs and websites.  The government then arrested four bloggers for blasphemy.  They are: Russell Parvez, Mashiur Rahman, Subrata Adhikari Shuvo and Asif Mohiuddin. Russell Parvez, he was a science teacher. Mashiur Rahman was arrested from his home on April 1, 2013. On the same day, Subrata Adhikari Shuvo was arrested. He was a master's student of Dhaka University .Finally, on April 3, Asif Mohiuddin was arrested from his sister's house.

The Somewhere In Blog   was forced by the Bangladesh Telecommunication Regulatory Commission (BTRC) to remove the blog written by Asif Mohiuddin. The blog is currently written, "The blog has been withdrawn or canceled for violating terms and conditions" . Human Rights Watch condemned the move.  At the same time condemns Amnesty International is , in the Center for the Inquiry, Reporters Without Borders, the Committee to Protect Journalists, including many organizations. Thus the incident came to the notice of the international community and they started worldwide protests.

Michael de Dora, director of the CFI, led various protests.  Maryam Nemazee, an Iranian activist, declared April 25 as the International Day for the Protection of Bangladeshi Bloggers. Many writers, activist intellectuals have publicly expressed their protest. Among them are  Taslima Nasrin , Hemant Mehta, PJ Meyers. Thus a storm of protests erupted around the world and various international circles called on the Bangladesh government to take more practical steps to protect freedom of speech.

Email ThisBlogThis!Share to TwitterShare to FacebookShare to Pinterest
Labels: Worldwide Protests for Free Expression in Bangladesh