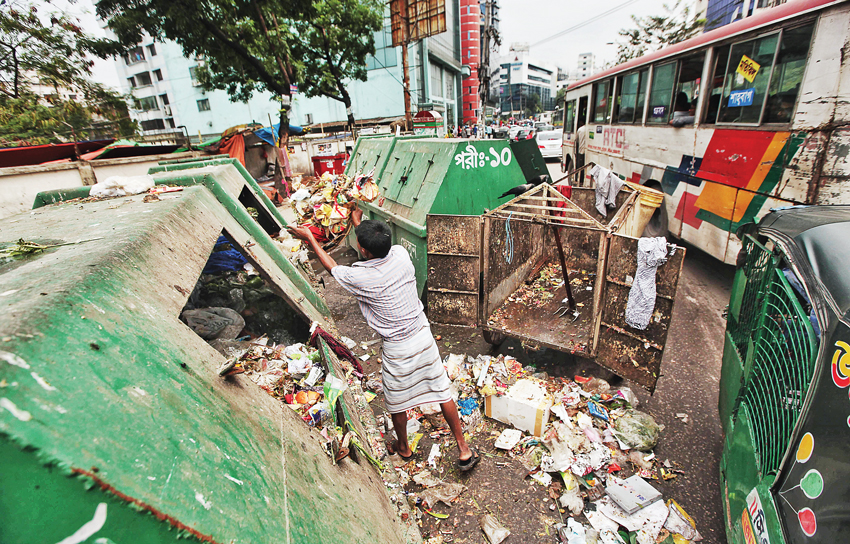 Bangladesh is the eighth most populous country in the world and the tenth most densely populated . Here in urban areas the population growth rate between 2010-15 is 3%.  With this growing population, the problem of proper waste management is also increasing, especially in big cities. According to a recent UNFPA report, Dhaka is one of the major polluted cities in the world and a major problem in urban waste management.

The trend of urban waste and background

At present (2012) the amount of waste generated in Bangladesh is about 22.4 million tons per year or 150 kilograms per capita.  The rate of waste generation in Bangladesh is increasing, thus in 2025 about 47064 tons of waste will be generated daily. Then the rate of waste production will increase to 220 kg per capita per year. The vast majority of the population does not have the opportunity to participate in proper waste management, which can lead to increased waste management chaos.  In Bangladesh, waste collection is only 36% in big cities like Dhaka. Waste that is not collected is released into the environment in an untreated state and can cause serious environmental and health hazards locally.

The negative impact of the weak barjyabyabasthapanara

Among the problems manifested by the lack of proper management of waste and especially urban industrial waste are the spread of malaria , respiratory diseases and various water borne diseases. Biochemical waste or hospital waste is very dangerous for Bangladesh. About 20% of biochemical wastes are highly contagious and are discharged directly into sewers or drains. Such poor management has far-reaching effects on the health of the locals. This infection is responsible for most of the infant deaths.  Solid wastes block drainage ditches and cause waterlogging on the roads. Besides, stench and mosquito infestation can be seen from the piles of garbage on the roadsides.

Email ThisBlogThis!Share to TwitterShare to FacebookShare to Pinterest
Labels: Waste management in Bangladesh