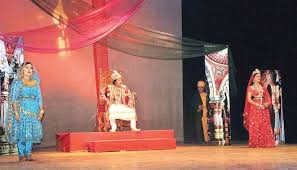 As the Gupta Empire extended to Bengal , the North Indian Aryan culture merged with the ancient Bengali culture. At that time the practice of Sanskrit drama in the style of rural culture began. The multifaceted activities of the local people gave rise to a number of urban areas which developed into the industrial and cultural centers of ancient Bangladesh. The four- act Lokananda, written by Chandragomi, was considered a popular play of the time.

In the 7th century, close political integration took place in many parts of ancient Bangladesh with Aryan culture. During this period, in favor of Bhaskar Varman , Harshavardhana , Lalitaditya , theatrical practice became more widespread in these regions. According to Kashmiri poet Kalyan , there was a famous dancer named Kamala in Pundravardhana at that time . Later, during the Pala rule, Bikrampur Bihar became the center of drama. Although this trend continued during the Sena rule, it came to a standstill during the Muslim rule.

Sanskrit Mancha Natak was hampered by the advent of Muslim rule in the 13th century. At this time there is a history of several theatrical activities, mainly supported by some Hindu feudal lords. Bhulua laksmana manikya this time was a great patron of Sanskrit theater.

Palli Mancha Natak refers to all types of Mancha Natak created within the geographical limits of Bangladesh . Palli Mancha Natak has been created directly by the local people out of necessity. However, it did not fully follow the basic structure of Sanskrit drama. Folk dramas include actors, dancers, singers, musicians, and puppets (both male and female), including crew. The presentation here was not limited to dialogue or speech. Rhythm, poetry, music, dance are associated with it. Bangladesh's rural dramas are descriptive, lyrical-dance, super-personal, puppet dramas, journeys, and so on.

The narrator or singer of a descriptive stage play narrates an event in the name of a person by presenting different characters. During this time he presented his story in part prose, part rhyme, part song. Sometimes the singer also takes the help of chorus artists (singers) or musicians (with the help of mridangs and temples). The singer carries a broom in religious ceremonies and occasionally dances with the singer. Sometimes the crew changes the voice and enhances the characterization. Sometimes she presents her original attire (towels, scarves, etc.) as a variety of accessories.

A lyrical-dance theatrical form is characterized by dancing in the music performance of a group of singers and musicians and is staged by the characterization of the Kushilvads.

The masked dance of the Gambhira festival is considered to be a religious ritual of the Koch community. In the 9th century, Tantric Buddhism in Bangladesh took on a form of its own, resembling the Astamatrika dance, the Mahakali Pyayakhan, the goddess Pyayakhan (Kathmandu, Nepal) and the Tibetan Buddhist camouflage dance. These dances were usually performed in Buddhist monasteries during Tibetan and Nepali religious festivals. These ceremonies are also served at the end of the year in Chaitra Sankranti and at the end of the procession.

At the end of the 12th century, when the Tantric Shaivism of Bangladesh was associated with decaying Tantric Buddhism, Mahakali Pyayakhan, the goddess Pyayakhan and similar dances were added to the Buddhist masked dance. In Bangladesh, the Tantric Saivite camouflage dance, which is not akin to the Kathmandu Valley dance, is worn out because of the Muslim conquest. At present only free dance, kalin dance, gambhira and sangayatra are left.

The existence of Patua music in ancient Bangladesh is confirmed by two sources: Harshacharita and Santal's painting exhibition. Harsacarite Bana(Harshavardhana's royal poet) narrates in detail the story of Harshavardhana's visit to the exhibition, when Harshavardhana was returning to the capital after receiving the news of his brother's death. An actor was doing it by painting the ghost king Yam. Recent anthropological studies, on the other hand, have shown that the Santal people exhibit paintings that represent the origin of life in them and pass from the mortal world to the dead. These indicate the history of the origin of ancient Patuagan in Bangladesh. In the Middle Ages, the exhibitions of Ramchandra, Sri Krishna, Manasa and Chandi were very popular. In the 18th century, pottery exhibitions became popular among Muslims, such as Ghazir pot, which is still seen in Bangladesh today.

It is not known exactly when puppet theater was introduced in Bangladesh. Yusuf Jolekha is the oldest literary example of its existence. Mukunda Chakraborty's Chandimangal (1555-56) and Krishnadas Kabir Aj's Chaitanyacharitamrita (1560-60) clearly indicate the existence of puppet theater during this period. In puppetry, one or more persons create dramatic environments by manipulating human or animal puppets in public or behind the scenes with the skill of the hand. Puppets appear in front of the audience based on a story. It is believed that these stories are related to Krishna, Rama, Manasa, Chandi and Chaitanya. Interestingly, no Islamic narrative in Bangladesh has been done by puppets. Puppetry is still popular in Bangladesh.

The procession is staged on the big Proscenium stage using music, song and dance. The word jatra means to go. In the past, the festivals that were held on the occasion of a journey or departure to a place, therefore, take the form of Jatrapala. Dance processions were held on the occasion of the festival of the gods. Rathyatra is such a festival. Journey is an evolutionary form of ancient folklore. It is the most popular form of domestic theater which can actually claim to be synonymous with the national theater.

The political and economic measures adopted by the English colonists from 1857 gave birth to the Bengali Renaissance in the early 19th century. During this time great changes took place in the society, culture and literature of Bangladesh . In 1895, Gerasim Stepanovich Lebedev first staged a play in Calcutta called "The Bengali Mancha Natak". In 1831, Prasanna Kumar Tagore founded the Hindu Mancha Natak, the first Mancha Natak established by a Bengali. During this time, Michael Madhusudan Dutt, the father of modern Bengali drama, wrote several plays based on English plays. As a result, the foundation of modern Bengali drama was laid under European influence. Besides, Deenbandhu Mitra's blue mirror published from Dhaka The play is considered as a significant play considering the socio-political situation of that time. In the last half of the nineteenth century, Rabindranath Tagore gave his own form to European-style Bengali drama. Later, Girish Chandra Ghosh took this modern form of Bengali drama to the doorsteps of the masses.

Until 1947, Bengali drama was centered in Calcutta, the economic and political powerhouse of 19th century India . After partition, the state of Pakistan was born and Dhaka became the capital of East Pakistan. The theater of the new country gradually moved towards polarization in two opposing camps: (a) religion-based nationalism and (b) language-based nationalism. Religious tendencies were prevalent in urban areas outside Dhaka. This trend seeks to glorify the history of Islam's Middle East, India and Bengal and Pakistan's freedom struggle through historical drama. Akbaruddin, Ibrahim Khan , Askar Ibn ShaikhOne of the pioneers of this genre. The second trend was mainly influential in Dhaka city and the playwrights of this trend were associated with Dhaka University. Shahidullah Kaiser , Jasim Uddin , Nurul Momen , Munir Chowdhury , Shawkat Osman are the pioneers of this section .

There are various meanings of Mancha Natak culture in the history and daily life of Bangladeshis. Mancha Natak performances strongly inspired the independence movement in Bangladesh during the British rule. Besides, it had a profound effect on the Bengali language movement . Language-based nationalism played an important role in this regard during the East Pakistan period. The grave play written by Munir Chowdhury is a famous play based on the language movement. Mancha Natak performances have significantly affected the freedom struggle of Bangladesh . Many NGOs are now using Mancha Natak as an effective medium to create awareness for many social issues in rural Bangladesh.

Email ThisBlogThis!Share to TwitterShare to FacebookShare to Pinterest
Labels: Theatre in Bangladesh