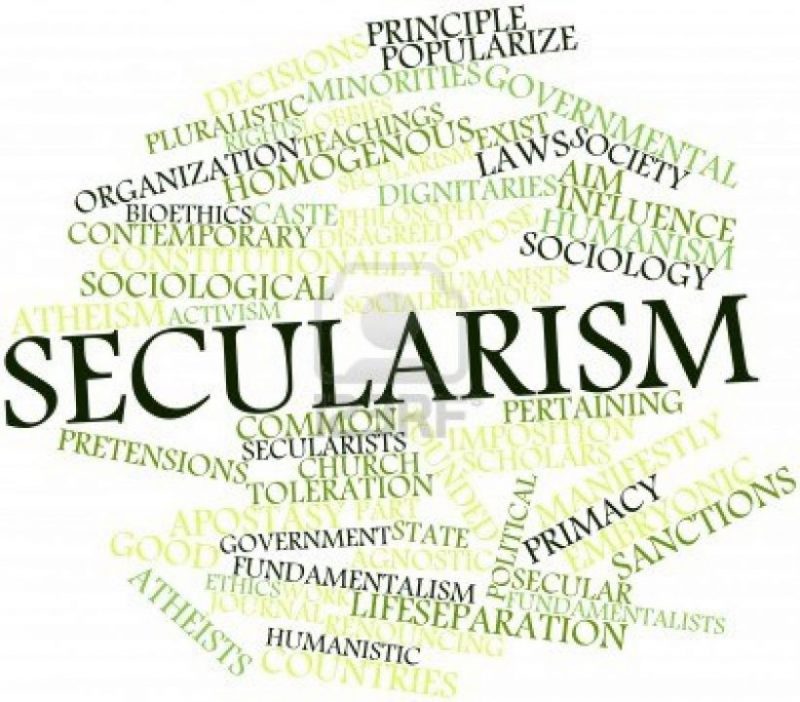 Secularism 197 of the Constitution of the country's first in four main bases.  The foundation of secularism was removed by Ziaur Rahman from the constitution in 1976,which was restored by "full trust and confidence in God Almighty," andin 1978 Islam was declared the state religion. In 2010, the Bangladesh Supreme Court reinstated secularism as a key tenet of the constitution. However, Islam remained the state religion. More than 90 percent of the people in Bangladesh are Muslims, the rest being Hindus, Buddhists, Christians and others. Bangladesh celebrates various types of secular ceremonies at different times of the year. Secularism in South Asia differs from the West in many respects where they certainly keep the state and the place of worship separate. Instead, it is the freedom of an individual to practice any religion without acknowledging any state or sectarian discrimination.

Secularism in the Constitution

Secularism is one of the four pillars of the 1972 constitution of Bangladesh. The basis of secularism was abolished by Ziaur Rahman through the 5th Amendment in 1986 and Hussein Muhammad Ershad declared Islam as the state religion in 1986.  In 2010, Bangladesh's Supreme Court declared the 5th Amendment invalid and re-established secularism as a fundamental tenet of the constitution.

The principle of secularism will be realized by eliminating the following:

The impact of the constitutional change

The removal of secularism from the constitution was described as the greatest betrayal of Bengalis and was against Bengali society and culture, both of which were seen as pluralistic and progressive. However, the Bangladesh Army, led by the Bangladesh Nationalist Party, and the center-right and conservative political parties declared that Bangladeshi nationalism was an Islamic state with 69 percent of the population being Muslim.  In 2008, the newly elected Awami League government announced the four main foundations of the Constitution of Bangladesh. Although Bangladesh is a moderate Muslim democracy in the eyes of the United Nations, Bangladesh's Foreign Minister Dipu Moni said "Bangladesh is a secular, not a moderate Muslim state".

Although the country once constitutionally suspended secularism, secularism returned in 2010 and secularism has been practiced in Bengal since time immemorial.  Ancient and medieval rulers, especially the Pala emperors and the Nawabs of Bengal, practiced secularism in court decisions. There were prominent leaders from both Muslims and Hindus to help the ruler. When the East India Company came in the 18th century, they set separate rules for Hindus, Muslims and Christians. In doing so, they laid the groundwork for social norms, many of which remain unchanged.

However, the British perpetuated the division among the Bengalis through division and rule. Bengali Hindus were seen as prosperous, educated and accepted into the civil service. On the other hand, Bengali Muslims, especially those living in East Bengal, were discriminated against. Most of the East Bengali Muslims were peasants and were persecuted by Hindu zamindars in support of the British. These factors led to a number of religious movements in East Bengal, such as the Frazi movement aimed at resisting the Hindu and zamindar ruling classes. In 1905, the Nawab of Dhaka, Sir Khwaja Salimullah, was one of the most oppressed people in East Bengal, most of whom were Muslims. He proposed the division of Bengal into different provinces for their overall development. The British accepted this division and formed new provinces called East Bengal and Assam. However, the Swadeshi movement in West Bengal for the unification of Bengal in 1911 was canceled due to opposition. In 1947, Bengal was again divided on the basis of communalism, East Bengal (now Bangladesh) was annexed to Pakistan and West Bengal was part of India, although the Hindu-dominated Khulna district was given to Pakistan and the Muslim-inhabited Malda and Murshidabad areas to India. Even in Assam, India, the Bengali Muslim majority remains in a few districts. The ethnic cleansing of the Hindus, especially the riots in Barisal in 1950 and the riots in East Bengal in 1964, forced the Hindus to go to India. Besides West Bengal, Assam, There are instances of expulsion of Bengali Muslims across Tripura. After the formation of Pakistan, the Bengalis faced extreme discrimination and economic hardship. The movement of Bengali nationalism gained a new dimension through the ever-growing culture and linguistic nationalism which was always secular.Bengalis of all religions participated in the war of independence of Bangladesh .

After the victory, the constitution of Bangladesh was written in 1972 on the basis of four characteristics of the new state. Those were nationalism, democracy, secularism and socialism. In 1975, the country's founding father Sheikh Mujibur Rahman was assassinated by some misguided officers of the army and martial law was imposed. In such a situation, the opposition put Khandaker Mushtaq Ahmed in power but later removed him and Lieutenant General Ziaur Rahman (known as Shahid Zia), the hero of the War of Independence, took over as President.

After taking over the presidency, Zia forged alliances with enemies during the war of independence, including Shah Azizur Rahman, Sabur Khan and Kazi Abdul Quader. One of his political strategies was to form an alliance with the anti-independence forces in order to do well against the slain Sheikh Mujibur Rahman's Awami League. Although Zia was known for bringing stability after the turmoil of 1975, he began to use religion as an important element in politics. He formed the Bangladesh Nationalist Party which re-established secular Bengali nationalism by nominal Islamic "Bangladeshi nationalism". In 1978, the Parliament of Bangladesh amended the Constitution by changing four basic principles. The amendment sustains secularism "All work will be based on full trust and confidence in Almighty God"

The last time Hussein Muhammad Ershad, the country's second military ruler, declared Islam was the state religion in Bangladesh was in 1986.  This was the latest act against the country's constitutional secularism.

However, since the return to democracy in 1991, the "pre-independence forces", the huge secular society and the freedom fighters have been pushing for the restoration of secularism in the constitution for the younger generation. In 2009, the Awami League government announced that it would amend the constitution and establish four main foundations.

By the Supreme Court of restoration

In 2005, the Supreme Court of Bangladesh declared the 5th Amendment invalid,  and the government re-established a constitution in the light of the 1972 constitution.  in which secularism was the state basis. Nevertheless, the opening sentence 'Bismillahir Rahmanir Rahim' (I am starting in the name of Allah, the Most Merciful and the Most Merciful: Tala) remained in force which was added in 1997.  In 2010, the Supreme Court of Bangladesh upheld the ruling that the 5th Amendment of 2005 was invalid. Prime Minister Sheikh Hasina has said she supports the approval of religion-based political parties.

After the 7th Amendment of June 7, 1986, 15 people filed a lawsuit against the state's religion law. On August 1, 2015, Soumendra Nath Goswami, a Supreme Court lawyer, filed another lawsuit in the High Court against the legitimacy of the state religion Islam under constitutional law; However, the 2011 constitutional amendment has secularism as its main basis.On March 26, 2016, the High Court dismissed the case and upheld Islam as the state religion.

Email ThisBlogThis!Share to TwitterShare to FacebookShare to Pinterest
Labels: Secularism in Bangladesh