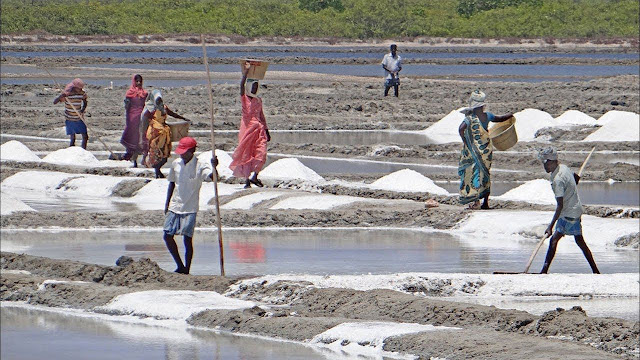 Large salt industry has developed around the salt produced in the coastal areas of Bangladesh . For a long time, salt has been produced by sea salt water in Chittagong and Cox's Bazar , Bangladesh from December to mid- May . At present Khulna and Satkhira Salt production has started in the region. In the past, people used to produce salt by burning seawater in the oven or drying it in the sun (solar method). Polythene salt production started from 2000-2001. The traditional method of salt production was 16.25 metric tons per acre and the new method produced about 21 metric tons per acre. This method produces 35% more international quality salt than the traditional method, which makes it possible to meet the demand of the country and export it abroad.

The history of salt production

Salt production has been a domestic industry in the coastal region since ancient times. A class of people in Chittagong known as Mulangi used to produce salt by boiling sea water. Their salt production area was called 'Tofal'. During the Mughal period, the industry was controlled by two government departments, the Nimak Jaigir Mahal and the Nimak Ayaz Mahal. Nizampur, Juldia and Baharchhara had a total of 39 salt collection fields under these three chaklas. In the sixteenth century, salt producers had to pay taxes to the public sector. Until the Mughal period, the government had a monopoly on the salt industry. The management was in the hands of the zamindar class. They used to pay the local traders to make salt with the salt farmers. Between 1757 and 1855, many Englishmen were directly and indirectly involved in the salt trade through the Baniyas.

The Merchants' Association was formed in 1855 on the initiative of the British and benefited the officers of the East India Company. Warren Hastings later imposed government monopoly on the salt industry, leasing salt production land to the highest bidder for salt cultivation for five years. In 18 this system was abolished and the annual contract was executed. The new system continued until 160 AD. The company is then directly involved in the management of salt production through the agency and is also involved in marketing by organizing joint auctions. The company continued to dominate until 182 AD. Tax administration imposed by the company, The domestic salt industry was destroyed by importing salt from abroad and banning salt production in India. In the early days of the rule of the East India Company, 69-99 thousand manas of salt was produced in Chittagong. At that time the employees of the company traded in the salt produced in Chittagong. Later, due to the import of salt from Liverpur, this natural industry was destroyed. The British government declared the production of sea salt illegal and a punishable offense, and the industry was shut down due to the imposition of excessive taxes on indigenous salt. Many Mulangis of Chittagong were caught and punished for cultivating salt in search of livelihood. The ancient salt industry of Chittagong was destroyed by such torture. Although salt production resumed in the 1930s under the influence of Mahatma Gandhi's salt movement, there was strong opposition from the British to the establishment of a new salt industry. Although the salt industry has been revived since 1947, it is still here

The role of BSCIC in salt production

East Pakistan Small and Cottage Industries Corporation (EPSIC) was established in 1958. The present Bangladesh Small and Cottage Industries Corporation (BSIC) started its salt industry activities with regular manpower from 1970-71 and operated till June 1985. In 1984, a census of salt producing units was conducted. The census registered a total of 16,541 salt producing units, a total of 11,69 acres of land under salt production and a total of 50,754 workers in the industry. The amount of salt produced was about 0.3 million tons and its value was 20 million rupees. The salt producing areas were the coastal areas of Chittagong, Noakhali, Barisal and Khulna districts. Natural climate variations, It's production fluctuate every year depending on the amount of rainfall and the conditions of land lease. In the post-independence period in 1971, Bangladesh Small and Cottage Industries Corporation undertook the task of developing the salt industry. A project worth Tk 13 million was adopted for its implementation. Subsequently in the implementation of activities22.6 million was provided by UNICEF . Bangladesh has never seen an increase in salt production before independence. In 1990, BASIC undertook 3 programs of special development and production at an estimated cost of Rs. 3,75.00 lakhs (revised). One of the sub-projects was related to the development of the salt industry and its estimated cost was Rs. 1,179.00 lakhs (revised). The objectives of the project were to achieve self-sufficiency in salt production, increase quality, ensure fair prices to producers, undertake research and development activities, motivate salt farmers and monitor demand, supply and production of salt. The project implemented development and expansion activities of the salt industry as a government project from July 1990 to June 2000 and revised from July 1990 to July 2005.

This project has been included in the revenue budget of the government from the financial year 2007-2008. The centers of this project are located in 6 thanas of Cox's Bazar district namely: Sadar, Ramu, Maheshkhali, Chakaria, Pekua, Kutubdia, Teknaf and 12 centers of Banshkhali thana area of ​​Chittagong district. The project is playing a role in keeping the prices stable by meeting the normal demand for salt and ensuring emergency supply. At present, 34,553 farmers are cultivating salt in 6,751 acres of land in Cox's Bazar and Chittagong districts. The salt industry contributes an average of around Tk 1,200 crore to the national economy every year. About 10-15 lakh people of Bangladesh are directly and indirectly dependent on the salt industry.

The Universal Iodized Salt Project (CIDD) was undertaken from July 1989 to June 2000 to address the iodine deficiency through iodized salt production. The government enacted the Iodine Deficiency Disease Prevention Act 1989 on 11 December 1994. Under this Act, production, marketing and storage of any edible salt other than iodized salt is prohibited in the country from 31 January 1995.

With the technical assistance of UNICEF, iodine blending machines were distributed free of cost in 26 factories through BSCIC and trained people were hired for supervision.

Email ThisBlogThis!Share to TwitterShare to FacebookShare to Pinterest
Labels: Salt industry in Bangladesh