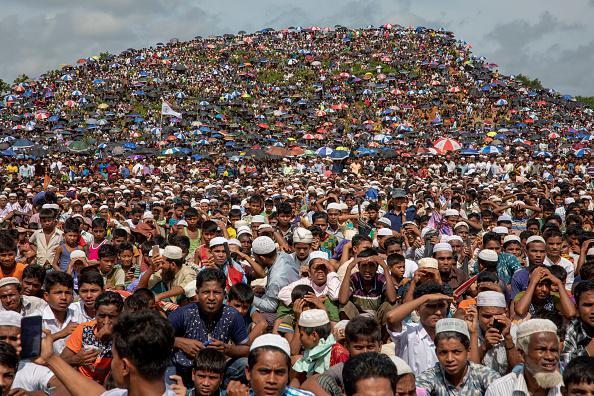 At the 73rd UN General Assembly on September 27, 2018, the Prime Minister of Bangladesh Sheikh Hasina said that there are now 1.1 million Rohingya refugees in Bangladesh.   The recent overcrowding of Rohingya refugee camps in Bangladesh has put a strain on its infrastructure. Refugees lack access to services, education, food, clean water and proper sanitation; They are also at risk of natural disasters and infectious diseases. As of June 2018, the World Bank Bangladesh has announced nearly half a billion dollars in financial assistance to address the needs of Rohingya refugees in various areas, including health, education, water and sanitation, disaster risk management, and social security.  On March 1, 2019, Bangladesh announced that it would no longer accept new Rohingya refugees. An August 2016 survey estimated that more than 24,000 Rohingya had been killed by the Myanmar army and local Buddhists since the "extermination" began on August 25, 2016. It was further estimated that at least 16,000 Rohingya Muslim women and girls were raped, 117,000 Rohingyas were beaten and 37,000 Rohingyas were burned in intentional arson.

The Rohingya are a Muslim minority in Myanmar who are considered by many Myanmar Buddhists as illegal immigrants to Bangladesh.  The Rohingya have been living in Myanmar for generations, and the Bangladesh government has called for the return of Myanmar refugees .   They have been denied citizenship in Myanmar and are described as the world's most persecuted minority. Rohingya are persecuted by Myanmar security forces and extremist Buddhists.  Myanmar has denied the Rohingya allegations. Rohingya refugees have been living as refugees in Bangladesh since 1980, with an estimated 300,000-500,000 refugees staying in Bangladesh as of 2016 . Most of the refugees live along the Teknaf-Cox's Bazar Highway , parallel to the Naf River , which borders Bangladesh and Myanmar . Most of the refugees live in or near Cox 's Bazar , a coastal area dependent on tourism .

Bangladesh thinks that the tourism prospects of the area will be damaged by the refugees. Refugee offenses and the 2012 Ramu violence in Cox's Bazar were also blamed.  Bangladesh is pursuing a non-repatriation policy for Rohingya refugees.  Most refugees remain unregistered, with only 32,000 refugees registering with the UNHCR and the Bangladesh government . It is estimated that more than 200,000 refugees are living in Bangladesh unregistered. Amnesty International reports, in a report in December 2016, that Myanmar's security forces committed rape , extrajudicial killings., And is overseeing the occupation of Rohingya homes. Refugees in the Chittagong Hill Tracts are displacing indigenous peoples. They have also been criticized for importing yaba .

On the local socio-economic impact

The effect on prices

A survey conducted from May to June 2017 found that Rohingyas were selling relief goods to locals at below market prices. They were selling more rice, lentils and cooking oil. As a result, sales to local shopkeepers were declining. On the other hand, the purchase of other products such as fish, meat, potatoes, vegetables and firewood by the Rohingyas has increased the value of these products in the local market.

Wages for local day laborers have dropped since the arrival of Rohingya refugees. Agricultural work and unskilled workers in particular have been affected. Due to the large number of Rohingyas working for low wages in the interest of earning, the locals have to work for low wages.

In 2015, the Bangladesh government proposed a plan to relocate Rohingya refugees living in the country to Thengar Char, a remote island in the Bay of Bengal . The plan did not work due to criticism from human rights activists and the UNHCR .

Between October and November 2016, about 75,000 Rohingya refugees came from Myanmar . The Bangladesh government decided to revive the relocation plan. Tanger Char sinks during high tide. It was formed in 2000 due to sedimentation in the river Meghna . It is not included in most maps , and is located on the island of Hatia, 30 kilometers away, which is the nearest living area. The Bangladesh Army is working to make the island habitable for refugees .

The first deadline for Rohingya repatriation was set for November 15, 2016. At that time no one could be sent to Rakhine as the Rohingyas did not agree. The Myanmar government recently sent a list of 3,540 names from 1,033 families for repatriation. Despite ongoing repatriation efforts, the Rohingya have refused to return and are handing out leaflets demanding five points. The points are:

Email ThisBlogThis!Share to TwitterShare to FacebookShare to Pinterest
Labels: Rohingya refugees in Bangladesh