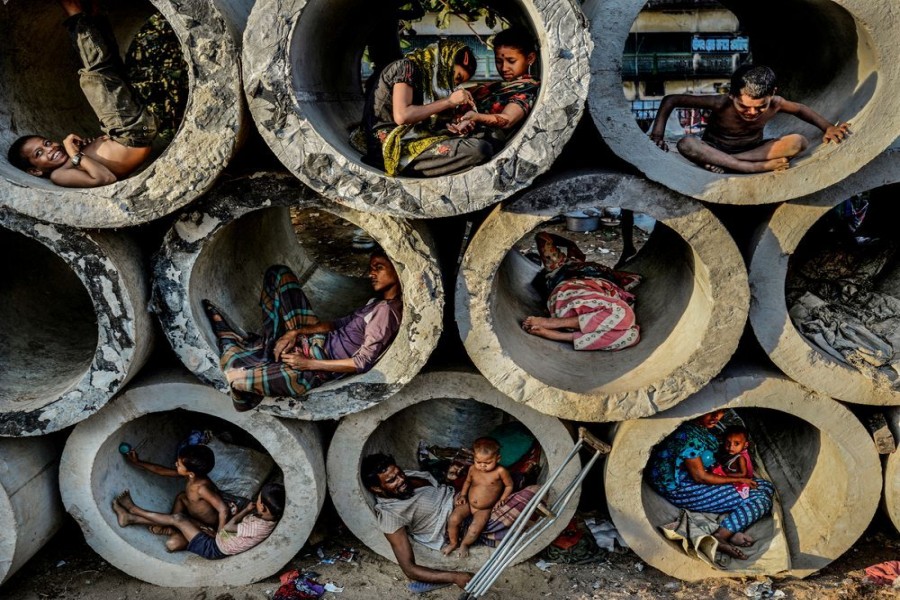 Bangladesh is a South Asian country located between India and the Bay of Bengal . India is on three sides in Bangladesh.

However, Bangladesh has many problems such as weak infrastructure, political instability, corruption and inadequate power supply; But since 1996, the country's economy has grown at a rate of 5% -6% per annum. Bangladesh is the 44th country in the world in terms of GDP . According to the IMF, Bangladesh's economy is the second fastest growing economy in 2016 at 7.1%.

The World Bank announced in June 2013 that despite having a population of about 150 million, Bangladesh had reduced its poverty line from 6.3 million in 2000 to 4.8 million in 2010. This means that Bangladesh will be the first country to set the first UN Millennium Development Goals on poverty alleviation, two years ahead of the 2015 deadline. Bangladesh is making progress in reducing its poverty rate and according to the World Bank, there is a huge opportunity to alleviate extreme poverty by 2030.

Since 1990, with the help of international aid, the poverty rate has decreased by 1 percent per year.According to 2010 figures from the Bangladesh Bureau of Statistics, 18.6 percent of the population was found living below the poverty line.

The population of Bangladesh is mainly rural, about 80 percent of the population lives in rural areas. Many people live in remote areas where education, health clinics, and adequate roads, especially roads connected to markets, lack such services. In rural areas, approximately 35 percent of the population lives below the poverty line.  They continue to suffer from food insecurity, do not own land and property, and often suffer from illiteracy and serious illness or disability.The other 29 percent of the rural population is considered equally poor. Although they have a small plot of land and some livestock and usually they can eat enough, their food lacks nutritional value.  As a result of health problems or natural disasters, they are at risk of falling into deeper poverty. Women are the poorest of the poor in rural areas, when they are the sole head of their families. They acknowledge inequality and have little chance of earning, and often have inadequate nutrition.

Approximately 21 percent of urban dwellers live below the poverty line.  In cities like Sylhet , Dhaka , Chittagong , Khulna and Rajshahi , residents enjoy a decent standard of living, including electricity, gas, and clean water.  Even in major cities, however, "a significant portion of Bangladeshis live in squalor when they are disconnected during the monsoons, and there is no regular electricity. These Bangladeshis have limited access to health care and clean drinking water."

As of April 2016, according to the Asian Development Bank , an estimated 15.69 crore people live in Bangladesh, of which 31.5% live below the national poverty line.

One of the main causes of poverty is local corruption and an incompetent government that has made little contribution to infrastructure and good legislation. A major cause of rural poverty is the geographical and demographic characteristics of the country. As a large part of the country is located in low lying areas, it is at risk of flooding. Many rural poor live in areas that are affected by annual floods and which cause huge damage to their crops, homes and livelihoods. To rebuild their homes, they often have to resort to moneylenders, which plunges them into deeper poverty. In addition, these natural disasters cause outbreaks of cholera, diarrhea and other waterborne diseases. Dengue and malaria reduce their physical and their productivity levels.

Another cause of rural poverty is the rapidly growing population rate. This puts enormous pressure on the environment, causing erosion and flooding, which in turn reduces productivity in agriculture.

The causes of urban poverty are limited employment opportunities, deteriorating environment, poor housing and sanitation. The urban poor work as laborers, which affects their health conditions. Therefore, the urban poor are in a difficult situation to escape poverty.

80% of the country is located in flood plains of Ganges, Brahmaputra, Meghna and other small rivers, which makes the country prone to floods.

There is a positive relationship between flood risk and poverty as measured by household income, people living below the poverty line face higher risk of flooding, as measured by river and flood depth. The high risk of flooding also lowers the value of property,  it is likely that anyone living in a flood-prone area is poor and, conversely, may not be able to afford safe living. Also, they depend on or depend on crop cultivation and fishery resources for their livelihood and are thus severely hit by floods related to their income.

Farmers are important in financing small-scale farming and their self-sufficiency in rice and floods adversely affects this production, destroying crops and arable land. Injuries to farmers often force them to sell afflicted land and thus act, the risk gradually or deepening into poverty. Floods such as the 1981 floods, especially in areas like these catastrophic floods, have shown that many affected families have suffered losses in selling land and livestock.

Also, in an area affected by the effects of poverty and floods, it was seen that many poor people were reluctant to pay for flood protection. Note that the main reason was the lack of financial resources although it was found that many people were willing to pay in return for money, such as labor, crops or part of their land.

The problem above is problematic because it creates a vicious cycle for the poor in Bangladesh. Since the poor may not be able to afford safe shelter, they will have to live near rivers which increases the risk of floods. This will result in more damage from the floods, selling the wealth of the poor will lead the poor to more poverty. They will be deprived of sufficient resources to protect themselves from massive flood damage, which will lead to further flood damage and increase in poverty. Then escaping from this cycle will become even more difficult. Even those farmers who are a little above the poverty line but a bad flood will bring them below the poverty line.

The impact of poverty in Bangladesh

Gross National Income (GNI) per capita was surprisingly below US $ 520 in 2008 when the per capita GNI purchasing power parity was US $ 1440 (2007). This is a reprehensible picture compared to other developed economies. Although the poverty rate in Bangladesh has been reduced, it is being done at a slower pace of less than 2% per year. 49% of the population is still below the poverty line. Poverty is an issue because it affects many factors of growth - education, population growth rate, employment and public policy. Poverty is most concentrated in rural areas of Bangladesh, thus creating inequality between rural and urban areas. However, urban poverty is also a problem.

In particular, poverty has been strongly linked to education and employment. Research papers published by the Bangladesh Institute of Development Studies (BIDS) have shown that poverty works both as a cause and effect of lack of education, which in turn affects employment opportunities. Having an unskilled worker reduces the productivity of the workforce which reduces the application of foreign direct investment (FDI) and thus hinders sustainable economic growth. Indeed, education makes an important contribution to the social and economic development of a country.

Second, the increase in landlessness is the cause of poverty in Bangladesh. Among the poorest of the poor in 2000 - four out of five out of 20 percent of the poorest people own less than half an acre of land. Many had no total land ownership of their own, but landlessness has also increased with the number of small and marginal farms in rural areas.  According to the 2000 Household Income and Expenditure Survey (HIES), nearly half (46 percent) of the country's rural population is effectively landless, owning a maximum of 0.05 acres of land. Roughly three-fifths of the families fall into this category.

Lastly, for chronic poverty, problems such as food security and health impede social mobility. According to a survey conducted by the World Bank on Dhaka, poor people are suffering from lack of proper healthcare in their area due to expensive and poor quality health care services. These vulnerable areas either do not have the facilities available, or they can only afford low quality healthcare. This is a common problem for both rural and urban poor. Among the problems of the urban poor are that they can only afford to live in slums where they have to face overcrowding and unhealthy living conditions. These two issues spread more diseases among the poor who do not have access to good healthcare. Also, there is no denying that one is good for increased productivity in the workplace as two parts of a healthy and fit citizen. Thus, poverty is an issue because it affects the social welfare of the citizens.

Email ThisBlogThis!Share to TwitterShare to FacebookShare to Pinterest
Labels: Poverty in Bangladesh