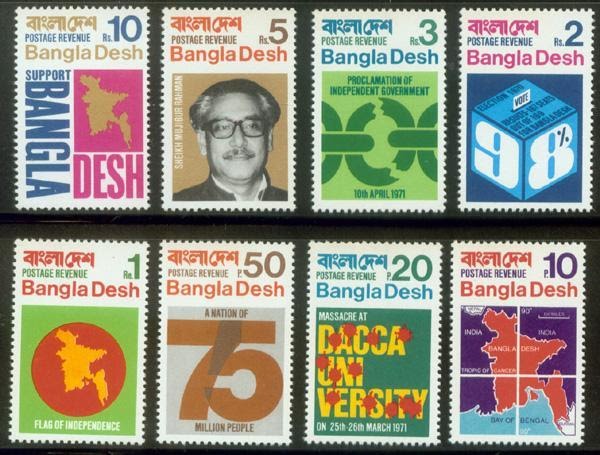 British Parliament Member George stonahausera recommended 1971-April at the end of Bangladesh Government in exile prime minister Tajuddin Ahmed stamps to publish a decision adopted according to the stonehouse UK expatriate Indian state of West Bengal, graphic artist, Professor Biman Mullick contact with a width Stamp design by creating the request. As per the instructions of the representative of the Government of Bangladesh, Justice Abu Saeed Chowdhury , Biman Mallick took the responsibility of making the complete plan and design of the stamp. The Pakistani army has targeted the innocent Bengali people through newspapers, radio and televisionThe story of inhuman torture was not unknown to the artist. So by accepting that proposal and responsibility, he took the opportunity to help the Bengalis in the struggle for independence as much as he could. Biman Mallick completed the design of eight stamps in just six weeks, despite being busy teaching. Justice Abu Saeed Chowdhury said in a memoir, "As a result of the issuance of this stamp, the idea that the Mujibnagar government is running Bangladesh has gained support abroad."

One of the stamps had a map of Bangladesh, the other had a ballot box. The ballot box is a symbol of democracy. Another was a picture of breaking a chain. This indicates that Bangladesh is free from the subjugation of Pakistan. One ticket had a portrait of Bangabandhu, the other a picture of the genocide at Dhaka University  . On 29 July 1971, the British Parliament organized a ceremony to mark the official release of the first 6 stamps and fast day covers of Bangladesh in different countries. The price of each set with eight stamps was 21 taka 60 paise.

Stamp prices in the first eight

Email ThisBlogThis!Share to TwitterShare to FacebookShare to Pinterest
Labels: Postage stamps and postal history of Bangladesh