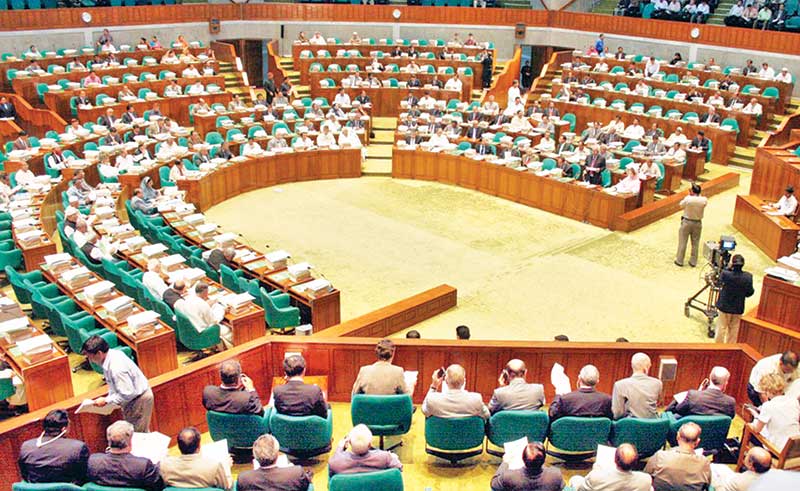 The politics of Bangladesh revolved around the history of the country's birth, the existing system of government, international influence and the political mentality of the people. Since the formation of the Provisional Government in 1971 and the enactment of the Provisional Constitution, the system of government in Bangladesh has changed at least five times. The present system of government in Bangladesh is parliamentary . In this system, the main power of the government is vested in the hands of the Prime Minister. In a multi-party democracy, the members of the National Assembly are elected by direct popular vote . Executive power is vested in the government. Laws are enacted in the National Assembly . The Constitution of Bangladesh was enacted in 1972, and so far 18 amendments have been added to it. Although there is no opportunity for the military to participate in the politics of Bangladesh, at different times military rule and military influence have controlled the course of politics in Bangladesh. The rise of Islamic forces and militant forces has sometimes influenced Bangladeshi politics. The goal of politics is democratic governance and public welfare. The right of the common man to vote has ensured their direct participation in politics. The people of Bangladesh are very much aware of politics. They actively participate in all forms of political activity. There are a large number of political parties in Bangladesh , among which Bangladesh Awami League and BNP are the two main political forces. The BNP party Jamaat - e-Islami Bangladesh and several other Islamists and nationalists The Awami League, on the other hand, has traditionally been linked in parallel with leftist and secular parties. Then, the third force is the Jatiya Party which was founded by Ershad . The Awami League-BNP conflict is now bitter and has led to constant agitation, violence and killings. Student politics has also been a strong legacy in Bangladesh since the independence movement. Almost all the parties have their own branches of very active student organizations and the students are also elected as Members of Parliament. Ordinary people are very disappointed because the politicians of Bangladesh are corrupt.

Since the independence of the country in 1971, the family system has been an important feature of Bangladesh politics. They are usually identified as families who have established their political or economic dominance in a party, national government or other position of national political prominence. Members of these national dynasties have generally not limited themselves to strict political activities but have been seen to engage in activities related to their business and culture. The notion of inherited wealth discourages politicians from working hard and encourages familism. Politicians in the royal family have a significant advantage from the beginning of their political careers, namely the popularity of their predecessors and the high probability of winning votes from people who have no political connection. Dynasty politicians also generally have less educational skills because their position (social, Political) relies more on dynastic connections than on bureaucratic or academic qualifications. Candidates of descent, coming almost exclusively from the upper class, are naturally biased to defend their own vested economic interests, which presents a conflict of interest.

Bangladeshi politics has been affected by the bitter conflict between the two families. Ziaur Rahman 's widow Khaleda Zia has been leading the Bangladesh Nationalist Party for 36 years since 1971 . And Sheikh Mujibur Rahman 's daughter Sheikh Hasina led the Bangladesh Awami League . They are known as “Battle Begum”; The two women inherited party identity from their family members and have ruled Bangladesh since 1991 as Prime Minister.

There has been much debate about the impact that family system has had on the political and economic conditions of Bangladeshi society. Despite the negative reaction of the people to the family system and the connection between dynastic activities and corruption, there is no law in Bangladesh that would limit the presence of political dynasties in Bangladesh.

Email ThisBlogThis!Share to TwitterShare to FacebookShare to Pinterest
Labels: Politics of Bangladesh