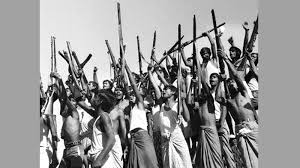 The history of military forces in the region can be traced back to the Sen and Mughal empires . The military forces of the time, including the Bengal Regiment, Dhaka Cantonment , Savar Cantonment and Bogra Cantonment , were formed from the British Indian Army. With the partition of the Indian subcontinent in 1947, the present part of Bangladesh was separated from the then Bengal province of East Bengal The name is associated with the newly formed Pakistan. Racial discrimination makes it difficult for the Pakistani military to carry out its duties. The Bengalis were under the control of the Pakistani military. In 1975, Bengali officers of various branches were able to make up only 5% of the total military force.  The West Pakistanis did not consider the Bengalis to be as skilled militarily as the Pashtuns and the Punjabis . They dismissed the Bengalis in a ridiculous and insulting manner. That's just it. East Pakistan did not receive any assistance in purchasing military equipment and there was a huge difference in approving the cost of the two parts. Indo-Pakistani war over Kashmir in 1965During this time the insecurity of the Bengalis became more evident. In East Pakistan, only a small infantry force and 15 warplanes without tanks were deployed to defend against Indian attacks.

Even after the Awami League's victory in the 1970 elections , President Yahya Khan did not allow Sheikh Mujibur Rahman to become the Prime Minister. On the contrary, Operation Searchlight , with the help of the Pakistani army, tried to stop all political activities by killing Bengali students, intellectuals and Hindus . At that time, Pakistani forces killed between 300,000 and 3 million people . At the call of Sheikh Mujibur Rahman's movement, Bengali officers and common people formed a resistance against the West Pakistanis and formed the Mukti Bahini . It was led by General Muhammad Ataul Gani Osmani andA guerrilla force formed with the active help of India . The Bangladesh Navy was formed in August 1971 when the war was in full swing . The force consisted of two ships and 45 sailors who attacked the Pakistani navy  . On 26 September, the Bangladesh Air Force under the command of Air Commander AK Khandaker set sail for Dimapur , Nagaland . With just a few planes and a helicopter , the force was able to launch 12 attacks on the Pakistanis.

The newly formed Bangladesh Armed Forces recruited a number of guerrillas from the Mukti Bahini  . General Osmani, the Commander-in-Chief of the Mukti Bahini, was appointed General of the Bangladesh Army  . For many years there was a disparity between Bengali officers recruited from the Mukti Bahini and those who worked for West Pakistan . August 15, 1975 the President of some misguided officers murdered politician Sheikh Mujibur Rahman , Khandaker Mushtaq Ahmed, the President and Major General Ziaur Rahman of Bangladesh Army Chief of Army Staff of the new sasana byabastha founded  . November 3 Brigadier Khaled MusharrafMujib's assassins overthrew the military. He was later overthrown by a socialist party of officers led by Colonel Abu Taher on 7 November and Ziaur Rahman came to power. This incident is known as Sepoy-Janata Biplob . The military was reorganized during Ziaur Rahman's presidency. He put an end to the rivalry and the cadets' grievances . Ziaur Rahman was overthrown in a military coup in 1981, and the following year Lieutenant General Hussein Muhammad Ershad was elected President Abdus Sattar.Took power from. Until the establishment of democracy in 1991, during the rule of Ziaur Rahman and later Hussein Mohammad Ershad, the military occupied the most important place in the country's politics.

Initially dependent on India and the Soviet Union , Bangladesh strengthened military ties with China and the United States . At present, the Bangladesh Army is actively involved in UN peacekeeping missions. During the Gulf War in 1991, Bangladesh sent a peacekeeping force of 2,193 members to Saudi Arabia and Kuwait . Bangladesh Army Namibia , Cambodia , Somalia , Uganda , Rwanda , Mozambique , Former Yugoslavia , Libya, Haiti , Tajikistan , Western Sahara , Sierra Leone , Kosovo , Georgia , East Timor , Congo , and Ethiopia have participated in peacekeeping missions. As of 2006, Bangladesh has been recognized as the second largest peacekeeper in the United Nations by sending 9,800 troops.

Email ThisBlogThis!Share to TwitterShare to FacebookShare to Pinterest
Labels: Military history of Bangladesh