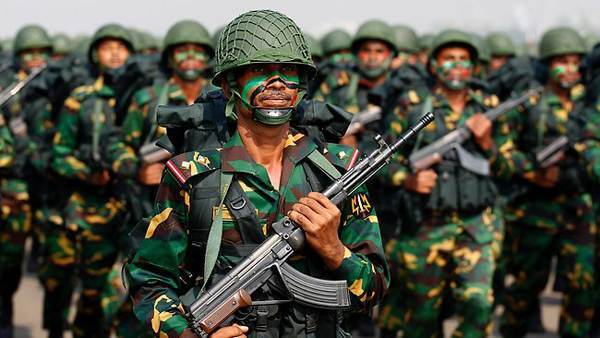 Since independence from Pakistan in 1971, Bangladesh has faced several military coups.

Construction of a military coup in 1975.

Some low-ranking officers of the Bangladesh Army conducted a coup d'etat on 15 August 1975 . They were led by Major Shariful Haque (Dalim) Bir Uttam, Major Syed Faruk Rahman and Major Rashid. The coup killed the country's then president, Sheikh Mujibur Rahman , his entire family (two daughters, Sheikh Hasina and Sheikh Rehana , survived due to their stay in Germany) and several ministers and Awami League leaders.

The government formed by Major Farooq, Major Rashid and Khandaker Mushtaq Ahmed was overthrown in another coup on November 3, 1975. The coup was led by General Khaled Musharraf Bir Uttam .

In the November 3 coup, Khaled Musharraf wanted a bloodless coup. So Major General Ziaur Rahman was placed under house arrest at his own residence. Colonel (Retd) Abu TaherHe was staying in Chittagong at that time. Colonel Taher was a special well-wisher of Ziaur Rahman. He was a believer in socialism. Soldier-officer discrimination was not his choice. Taher was very popular among the general soldiers of the army for his policy. Colonel Taher believed that Xiao was a man of his ideals. After the November 3 coup, Taher learns that Ziaur Rahman has been taken prisoner. He immediately left Chittagong for Dhaka on the orders of the sepoys of his loyal East Bengal Regiment to revolt in Dhaka, accompanied by hundreds of Jasad workers. Colonel Taher's counter-coup was successful on 7 November. Colonel Taher released Ziaur Rahman from Dhaka Cantonment. In a counter-coup, East Bengal Regiment troops killed General Khaled Musharraf.

General Ziaur Rahman faced about 21 coups during his five-year rule. He survived 21 coups but died in the 22nd coup. Most of them were made up of 1971 freedom fighter officers who could not tolerate Zia's ties to Islamist groups. He strongly suppressed these movements.

The coup took place on May 30, 1971, in the southern port city of Chittagong, following the assassination of President Ziaur Rahman . General Manzoor was blamed for the coup, which was carried out by a group of army officers in a conspiracy by President Zia's chief of staff Ershad. He was a heroic freedom fighter. Lawrence Lifshulz claimed that Brigadier Mahmudul Hasan was sent to Chittagong Cantonment from Dhaka to remove the evidence and that Manzur was killed in the cantonment.

Construction of the next coup attempt

Later in 1998, the then army chief General A. S. M. Nasim attempted a coup. But it failed due to the defensive role of General Imam Uz Zaman Bir Bikram . Abdur Rahman Biswas was the President of Bangladesh at that time .

January 11. The so-called emergence in 2007 ( One Eleven or One Eleven ). The state of emergency was declared on January 11, 2008 in the wake of the BNP-Jamaat coalition government's unilateral parliamentary elections. Later, an army-controlled 'interim government' was formed under the auspices of the caretaker government. To commemorate the day, it was later renamed One Eleven. The day was Thursday. There were various rumors and rumors all day long. The overall situation was tense. In this situation, the then presidium members of Awami League Amir Hossain Amu , Abdur Razzak , Tofail Ahmed , Suranjit Sengupta , Sheikh Fazlul Karim Selim and Kazi Zafar Ullah around 4 pm.And General Secretary Abdul Jalil attended a meeting at the Canadian High Commissioner's residence. Among the diplomats present at the meeting were US Ambassador Patricia A. Butenis, British High Commissioner Anwar Chowdhury, Australian High Commissioner Douglas Fosket, Japanese Ambassador Inouye Masayeki, European Commission (EC) Delegation Chief Ambassador Dr. Stephen Groin and UN Resident Coordinator Renata Dazalien. Awami League leaders came out disappointed after the meeting till 5:15 pm. They declined to say anything to reporters about the content of the discussion. Awami League leaders leave Canadian High Commissioner's residence and go straight to party president Sheikh HasinaAt the house of Sudha Sadan in Dhanmondi. Half an hour after the Awami League leaders left, a BNP delegation sat in a meeting with the diplomats at the house of the Canadian High Commissioner at around 5.15 pm . It was led by the then BNP secretary general Abdul Mannan Bhuiyan . They also did not open their mouths at the end of the meeting. Go straight to Hawa Bhaban in Gulshan. There they had a meeting with party chairperson Begum Khaleda Zia . Earlier in the afternoon half of the sixth Jatiya Party (JP) Chairman HM Ershad 's Baridhara residence of the British High Commissioner Anwar caudhurikutanitikadera met with the two parties before the meeting, Chief Adviser and President Iajuddin AhmedHe had a meeting with the law and order advisory committee at 12 noon. Apart from the members of the committee, the heads of all law enforcement and intelligence agencies were also present. Immediately after the meeting, President Iajuddin visited BangabhabanThe three met with the army chief. On the other hand, the scheduled meeting of the advisory council was canceled at 4.30 pm. Except for one or two advisors, almost all of them went to Bangabhaban and came back with the news of the cancellation of the meeting. Chief of Army Staff Moin U Ahmed held a meeting at the Army Headquarters with the heads of all law enforcement agencies and intelligence agencies including BDR. The advisers were called back to Bangabhaban at 8.30 pm. Advisers are informed of the situation that has arisen without any meeting. At this time all the advisers were requested to resign. The president then stepped down as chief adviser. At the same time the advisers also resigned. Later, Dr. Fakruddin Ahmed was appointed as the Chief Adviser to the caretaker government. He formed a new advisory council. In the midst of all these dramatic events and tensions, a notification issued by the President's Office in the evening said, Iajuddin Ahmed has declared a state of emergency in the country with the powers given in Article 141 of the Constitution. . The state of emergency will be effective from Thursday evening. At the same time, curfew was announced in all metropolitan and district cities including Dhaka from 11 pm to 5 am. After that, the then President addressed the nation at 11:30 pm amidst various concerns and anxieties.Iajuddin Ahmed . In his speech, he said that after taking two responsibilities at the same time, the controversy started around him. In this situation, he has decided to resign from the post of chief adviser to the caretaker government to pave the way for an acceptable election through the participation of all political parties. At night, the government's information department issued verbal instructions to the media to refrain from covering political news and critical news of the government. The news and talk shows of the TV channel stopped immediately.

Email ThisBlogThis!Share to TwitterShare to FacebookShare to Pinterest
Labels: Military coups in Bangladesh