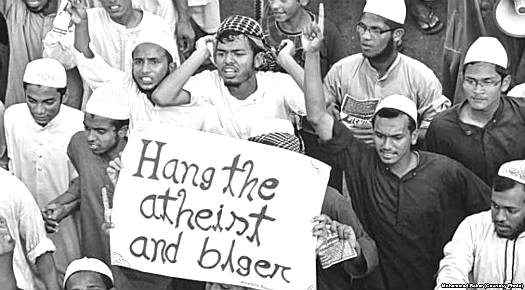 According to the constitution of Bangladesh , every citizen has religious freedom . They will be able to practice their religion like them. Constitution of the Republic; Has declared all religious discrimination illegal. However, in recent times, a number of Bangladesh atheist bloggers have been assassinated by religious fundamentalist groups. A 2009 Gallup poll found that 99 percent of those surveyed said religion was an important part of their personal lives.  Another Gallup poll in 2014 found that 5 percent of Bangladeshis claim to be irreligious. Another Gallup in 2016 According to the survey, 19 percent of Bangladeshis claim to be secular.

In February 2013, a mass movement was organized in Shahbag to ban Jamaat-e-Islami from politics due to the death sentence of top war criminal Abdul Quader Mollah and his cooperation with the then West Pakistan in the 1971 war of liberation .  isalamabhittika the custody of Islam Bangladesh atheist bloggers hardened, blasphemy laws to round of 13 for the implementation of 013 Motijheel movement.Since then, various attacks have been made on secular bloggers who supported the Shahbagh movement.Amnesty International expressed concern that: Violence ; It has also increased on Hinduism .

At the details of the move by the government

In early April 2013, Bangladesh police arrested four bloggers on charges of hurting religious feelings. There are four bloggers; Subrata Adhikari Shuvo, Russell Parvez, Mashiur Rahman Biplob and Asif Mohiuddin. The blog called 'My Blog' was shut down by the administration. Hefazat - e-Islam, a religious group, demanded that Bangladesh bloggers be banned.Asif Mohiuddin's blog was shut down by the BTRC .

Taslima Nasreen, a 1990 author, became controversial in the context of Bangladesh, "for portraying sexuality in her poems, for a self-proclaimed atheist, and for her iconoclastic lifestyle."  In his newspaper column, he slammed religious fundamentalism and sharply criticized the government's indifference. In the same year, he suffered a sudden injury at a book fair, and his passport was confiscated. In July 1993, his novel Lajja was banned by the government for spreading misleading information in the community .  Fatwa  for his death on September 23, 1993 Is issued. Under international pressure, his passport was returned in April 1994, after which he moved to France and returned to India. An arrest warrant was issued against him on July 4, 1994 and he went into hiding to avoid arrest. She was released on bail on August 3, and Nasreen fled to Sweden. There he lived in exile for some years. He came to Bangladesh in 1997 to see his critically ill mother, but was forced to hide again in the face of protests and threats. He moved to India in 2005, where he applied for citizenship. He is currently in India temporarily.

On January 15, a self-proclaimed atheist 013 Asif , Dhaka's Motijheel office was stabbed. He did, however, survive that journey.  Mohiuddin, winner of the Bobs Award for online activity , topped the list of hits made by extremists.

On February 15, 2013, prominent anti-Islam blogger Ahmed Rajib Haider in his Dhaka city; He was stabbed to death outside the house.

On February 26, 2015, engineer and renowned Bangladeshi blogger Abhijit Roy and his wife Bonya Ahmed confessed to being stabbed by miscreants in Dhaka. Abhijit and his wife were coming from Ekushey Book Fair by rickshaw around 8:30 pm .When they approached the student-teacher auditorium of Dhaka University , they confessed to being attacked by miscreants. His wife was seriously injured and lost a finger.

On March 30, 2015, another blogger, Washiqur Rahman , was assassinated in Dhaka Tejgaon like Abhijit Roy. Police arrested two suspects, and recovered a meat-cutting knife from them. The suspects said they killed Rahman because Washikur used to write anti-Islamic satire.  The suspects confirmed to police that they were members of the Ansarullah Bangla team and had been trained for 15 days before killing Niloy on how to kill.

Ananta Bijoy Das was an atheist blogger,  and was on the list of extremists. He was killed on 12 May 2015 in Sylhet by four masked men.  Ananta wrote in a free-spirited blog, writing three books, one on science, one on evolution, and one on the Soviet revolution. He was the head of the Science and Rationalist Association of Sylhet.  He was the editor of a periodical called Argument.

Email ThisBlogThis!Share to TwitterShare to FacebookShare to Pinterest
Labels: Irreligion in Bangladesh