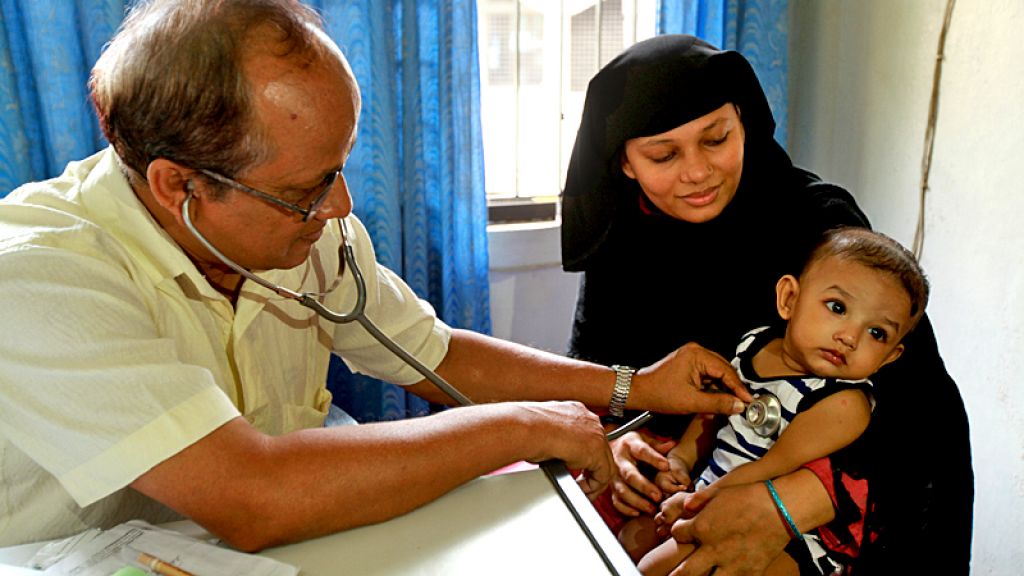 Health and education rates are still low in Bangladesh, although these have been declining in recent times. (31% in 2010  ).

In order to ensure equitable healthcare to every resident of Bangladesh, a wide network of administrative web of Bangladesh has been established. It has a wide range of healthcare networks across the country, from action-making companies to healthcare facilities to the community level. The infrastructure of health care centers can be divided into three levels: Medical University, Medical College Hospital, Specialized Hospital. District Hospitals, Maternal and Child Welfare Centers are considered as secondary level. Upazila (Sub District) Health Complex, Union Health and Family Welfare Center, Community Clinic (Minimum Level Health Facility) is the primary level health provider. Various NGOs and non-governmental organizations also contribute to this complex health network.

Health problems in Bangladesh include infectious and non-communicable diseases, malnutrition, environmental sanitation and others.

From a historical point of view, infectious diseases in developing and tropical countries such as Bangladesh have caused a large number of diseases. Cancer and Infectious Diseases: Tuberculosis, HIV, Tetanus, Malaria, Measles, Rubella, Leprosy and so on. In 2015, through the Millennium Development Goals (MDGs), where infectious diseases can be detected, Bangladesh has achieved almost control over infectious diseases. An expanded immunization program was implemented against 9 major diseases (TB, tetanus, diphtheria, whooping cough, polio, hepatitis B, haemophilus influenzae type b, measles, rubella).

However, recent statistics show that the incidence of non-communicable diseases due to epidemic infections has increased by 81% of the total disease. According to the National NCD Risk Factor Survey, in 2010, 99% of the population surveyed had at least one NCD risk factor and 29% showed> 3 risk factors. Social change, rapid urbanization and unhealthy eating habits are the main reasons behind the high growth of non-communicable diseases in Bangladesh, especially among the rural population and urban slum dwellers.

One-third (approximately 1.75 million) of people with diabetes in Bangladesh suffer from diabetic retinal degeneration. These recent estimates are as high as in Western countries and similar to those of Asian Malays living in Singapore. Rapid economic change, urbanization, technology-based modern lifestyles, strict diabetes control guidelines and reluctance to seek health care are considered to be the risk factors for diabetic retinopathy in Bangladesh. Unfortunately the current capacity of the country to address this emerging health problem, diagnose and treat diabetic retinopathy is very limited in a few centers. So far this year (2017), under the HPNSDP (Health Population Nutrition Development Program) as per the record of National Eye Care, 10,000 patients with diabetic retinopathy have received services from secondary and grassroots hospitals where screening programs have been set up.

Bangladesh has one of the most serious malnutrition problems. The current per capita food intake is 1850 kcal which is by any standard. Malnutrition results from the convergence of poverty, unequal food distribution, disease, illiteracy, rapid population growth and environmental risks, as well as cultural and social injustice. It occurs mainly among the families of landless peasant workers and small partner farmers.

The specific nutritional problems in the country are:

Bangladesh is one of the top countries in the world in terms of child malnutrition. Two-thirds of children under the age of five are malnourished and 60% of children under the age of six are stunted.  As of 1985, 45% of rural households and 8% of urban households consumed calories at a lower rate than the specified calorie intake. Malnutrition is passed down through the generations, as malnourished mothers give birth to malnourished children. One-third of children in Bangladesh are born with low birth weight, the infant mortality rate is increasing, and the risk of diabetes and heart disease is increasing from adulthood. One newborn dies every three to four minutes in Bangladesh; 120,000 newborns die each year.

The World Bank estimates that Bangladesh ranks first in terms of malnourished children.  26% of Bangladesh's population is malnourished   and 48% of children are underweight.  One in five children has vitamin A deficiency and two have anemia.   Women suffer the most from malnutrition. They avoid themselves to provide food for their family but that is very important for them.

Most parts of Bangladesh are low lying and flood prone areas. The majority of the country's population lives in areas where extreme annual floods are at risk of massive crop damage.Every year, 20% to 30% of the country is flooded. Floods increase the risk to food security and its impact on agricultural production.

Health and sanitation affect environmental malnutrition. Inadequate water supply, health and sanitation have direct effects on infectious diseases, such as malaria, parasitic diseases, and schistosomiasis . People suffer from both water scarcity and low quality drinking water. Concentrations of arsenic are often found in groundwater.  In 1995, sanitation in rural areas was only 35%.

Often one in three members of very poor families defecate in the open. Only 32% of rural latrines have international standards for being considered a proper latrine. People suffer from daily environmental problems. The immune system fails and disease-infestations cause significant nutritional damage, leading to further deterioration of malnutrition.  These diseases reduce appetite, absorb vitamins and nutrients, and further reduce nutrition due to diarrhea and vomiting. Unemployment and work problems play a major role in malnutrition in Bangladesh. The unemployment rate in 2010 was 5.1%. People do not have the opportunity to work all year round.

The effects of malnutrition

The child born to a malnourished mother has to face various problems to grow up and transform into a healthy teenager. They suffer from various health problems such as: debilitating, physical development problems, low weight, anemia, night blindness and iodine deficiency diseases. As a result, Bangladesh has the highest infant mortality rate and the 58th lowest infant mortality rate in the world.

40% of the population of Bangladesh is children,  malnutrition in children and its health effects can potentially reduce the rate of educational achievement. In Bangladesh, only 50% of children can go to secondary school. This could result in a low-skilled and low-productive workforce that could affect the rate of economic growth.

Many programs and efforts have been implemented in Bangladesh to solve the problem of malnutrition. UNICEF has teamed up with the government and many more NGOs, such as Helen Keller International , have looked to ensure the supply of nutrients in the life cycle of pregnant mothers from infants.  The results of this intervention are significant. Night blindness decreased from 3.8% to 0.04% and iodine deficiency in school-age children decreased from 42.5% to 33.6%.

One in eight pregnant women receives antenatal care from a medically trained person, and less than half of all pregnant mothers receive antenatal care. Inequality in maternal care has now been reduced due to ensuring universal access to health care.  In 2010, the maternal mortality rate in Bangladesh was 340 per 100,000 live births. This compares to 336.3 in 2006 and 624.4 in 1990. . In Bangladesh, there are 6 midwives for every 1,000 live births and 1 in 110 pregnant women is at risk of death.

Email ThisBlogThis!Share to TwitterShare to FacebookShare to Pinterest
Labels: Health in Bangladesh