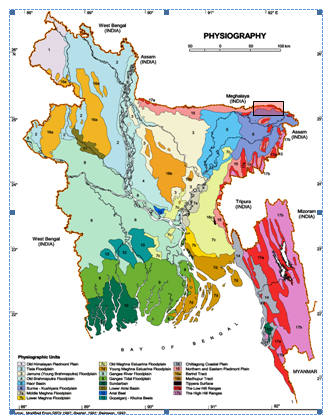 The geology of Bangladesh is influenced by the location of the country. Bangladesh is basically a riverine country. The region consists of two-thirds of the delta formed by the Ganges and Brahmaputra rivers north of the Bay of Bengal . To the north-west of this region are two small but somewhat elevated areas formed by ancient sediments known as the Barind land and the Madhupur tract . On the other hand, in the eastern border area, folded mountain ranges formed during the Tertiary period are observed.

In terms of geological structure, Bangladesh is basically divided into two main parts. The narrow area between the two is called the hinge zone.

The pre-Cambrian Indian platform extends along the Rangpur , Dinajpur , Bogra , Rajshahi and Pabna regions of Bangladesh . The region is relatively stable in terms of topography. As a result, the thickness of the sedimentary rock layer formed on it is comparatively much less. The thickness of alluvial soil above this foundation rock is at least 130 m and the thickness of this sediment is continuously increasing towards the south-east. The region is bounded on the south by the Hinge Zone and on the north by the sub-Himalayan Fordip. The pre-Cambrian Indian platform area is divided into Rangpur Saddle or Dinajpur Shield and Bogra Shelf.

Geosyncline can be observed in the south and east of the hinge zone in Bangladesh. It is generally thought that a basin or geosyncline was formed during a geological period in the past when a folded mountain was formed by an earthquake. The main feature of this region is that the thickness of the sedimentary rock layer is comparatively much higher here, which is usually more than 12 to 20 km thick. Another notable feature of this basin is that oceanic rocks are present in this basin region below the sedimentary rocks instead of continental rocks. Some Cretaceous are thought to be below the sedimentary rock layer in this regionThere are rocks of the age. The basin or geosyncline region is further divided into two subdivisions called the Fordip region and the fold belt region. Geologist of Bangladesh 6 A peculiarity of the structure is that the geological structures of the area, such as the ellipses, have not been subjected to intense geostationary movements in most cases and therefore its rip is mostly mild. The arrival of oil inside is believed to have taken place a few decades ago in the context of the geological past.

Email ThisBlogThis!Share to TwitterShare to FacebookShare to Pinterest
Labels: Geology of Bangladesh