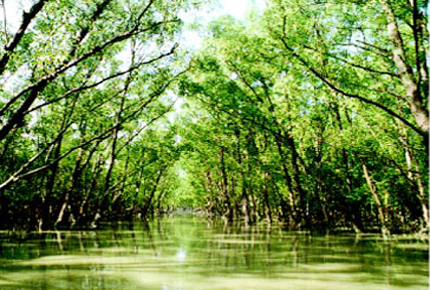 The unit of vegetation with characteristic external appearance and structure is defined as the type of forest. The types of forest determinants are climate , soil , vegetation and past developmental functions (including biological interventions). Environmentally, the forests of Bangladesh have been divided in different ways. These include tropical moist evergreen forests, tropical semi-evergreen forests, tropical moist deciduous forests, freshwater wetland forests, parabon or mangrove forests, and created forests.

These forests are commonly found in the hilly areas of Sylhet , Chittagong and the Chittagong Hill Tracts . They also exist in Cox's Bazar in the south-east and Moulvibazar in the north-east .

Evergreen plants dominate here with rich biodiversity . In addition to these trees, almost deciduous and deciduous species are also found, but the evergreen features of the forest remain intact.

The tallest canopy trees can grow to a height of 45 to 62 meters. Parasitic orchids , ferns and fern helpers, ascending creepers , terrestrial ferns, mosses, arrows, and canes are found in shady moist places due to humidity . Inadequate amount of shrubs , weeds and grasses .

Such forests are found in the hilly areas of Sylhet, Chittagong, Cox's Bazar and Chittagong Hill Tracts. There are some such forest areas in Dinajpur in the north-east . Although usually evergreen, deciduous trees also rule here. Jhum cultivation is prevalent in most of the forests .

So far, the presence of about 800 species of flowering plants has been recorded in these forests. These forests have more shrubs than evergreens. The height of the highest canopy is 25 to 56 meters. The plants at the top of the valley and wet slopes include chapalish, telsur, chundul , and buddhanarkel . In the middle level udithadeera gutgutia , toon, pitaraja , Nageshwara , uriama , nalijama, gadajama , pitajama , dhakijama are significant. Daphne and Quechua are also seen at the lowest level . Roar , on the other hand, is found in relatively hot and dry slopes and in the upper layer of vegetation., Banashimul, Shimul , Shil Kadai , Chundul, Guja Batna, Kamdev, Bura Gamari, Behera , and Muz. In the middle level there are Gab , Udal , and Shivadi and in the lower level Adalia , Barmala, Goda, Ashoka , Olive and Darum . Common foliage plants include roaring, shimul, banashimul, batna, chapalish, tun, kadai, and olive.

The tropical moist evergreen forest and the tropical semi-evergreen forest together occupy 680,000 hectares of land, which is 4.54% of the total land area of ​​the country and 44% of the total national forest area. In addition, both types of forests are home to a wide variety of species. Notable among the mammals are elephants , monkeys , wild boar , deer , sambar deer , and Indian cheetah . These reptiles include conch , monitor lizard , and Bengal monitor lizard .

Such forests are widespread in Dhaka, Mymensingh, Dinajpur, Rangpur and Comilla in Bangladesh . These forests are also referred to as shale forests as the shale trees dominate these forests (about 90 percent). However, in the course of time, these forests have become thinner due to various reasons. The canopy of the forest is about 10 to 20 meters high.

These forests cover a total area of ​​120,000 hectares, which is 0.61 per cent of the total land area of ​​the country and 6.8 per cent of the total forest area. These forests have a reserve of about 36.5 lakh cubic meters of timber. Mammals in the khekasiyala , monkey , cougar , etc. exist. Also notable as reptiles are the Bengal Monitor Lizard, and the Common Cobra.

Such characteristic forests are found mainly in the Bet Bhumi and Hijal-Karach forests of the Haor region of Sylhet. During the monsoon season, these forests are flooded to the brim. These forests are also found in the lowlands of the hilly forests.

Such forests are observed in the coastal areas of Bangladesh. These forests cover an area of ​​about 520,000 hectares. These forests are washed away in tidal water from time to time. Sometimes there is a special type of vegetation in the region, as well as adaptation sbasamula , thesamula , and jarayuja germination can be seen. The main tree of this forest is beautiful. There are also beautiful animals , gewa , keora , crab, Bain , zucchini , Amur , call , and so on.

In 181 , teak seeds were brought from Myanmar to create state forests in the Kaptai region of the Chittagong Hill Tracts . Later this practice spread to Sylhet and Chittagong divisions also. In addition to teak, other trees that have been created include gamma, chapalish, roar, mahogany, jarul, toon, pinkado , and blackberry. Also later cultivation of gamma, kadam, acacia , eucalyptus and pine as fast growing plants started.

As a private forest, rural forests are playing an important role in meeting the national demand for forest products. Its total area is about 270,000 hectares. It is estimated that there is a total reserve of about 5 crore 48 lakh cubic meters of forest products in these forests located in the homesteads.

Email ThisBlogThis!Share to TwitterShare to FacebookShare to Pinterest
Labels: Forestry in Bangladesh