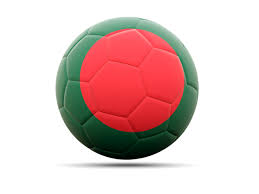 Football is one of the most popular sports in Bangladesh . During the war of independence of Bangladesh, the independent Bengali football team as a representative of the people of this country played exhibition football in different parts of India and helped in shaping the world public opinion .

Compared to the past, the quality of Bangladeshi football has declined due to unpredictability, lack of support and poor investment. The nation's success in Test cricket and participation in the Cricket World Cup spread the interest in cricket past fame. National football, however, does not affect the popularity of football. More football tournaments are held in Dhaka and abroad than at any other sport and football fever during other FIFA World Cups. Federation officials and experts are still optimistic about the development of football in the country over the next ten years, despite financial constraints and a lack of professionalism.

Before the 1990s, league football saw a fever in national football, especially in the Dhaka League, where there were famous club teams both at home and abroad. League football was popular under Pakistan from 1940 to 1970. There were several major football clubs in Dhaka. Dhaka Wanderers in 1940s, Victoria SC, Wari Club, Mohammedan SC, EP Gymkhana, Was the most notable person in the railways and the fire service. In a match of the East Pakistan Governors, West Bengal finished the double run of the innings and held it in Dhaka. For the first time in 1947, Bangladesh was under Pakistani rule three years before the mother tongue movement by Victoria SC. The Dhaka League was very prestigious in South Asia and Asia. Many teams in the Dhaka League became one of the most successful teams in the Asian continent (mostly in the mid-September 1, 1990s). The league has also been as far as possible for players from the top European teams. Football is played both in domestic leagues and abroad. Bangladesh Football Club has successfully played in international football tournaments like BKSP and Bangladesh Red Aba Khan Gold Cup, President Goal Cup, Dana Cup and Gothia Cup. BKSP Won for the second time in 1990 and Bangladesh Red became the first President Gold Cup runners-up in 1981 and won it in 1982. On the other hand, Bangladeshi clubs have won three more top titles: Pakistan's Quaid-e-Azam Trophy in 1975, Myanmar's four-nation state competition in 1995 and Bhutan's Jigme Dorji Wangchuck Memorial Football.

The best player of all time is Kazi Salahuddin, who played professional football in Hong Kong in 1989, and is currently the President of the BFF.

After the establishment of the BFF (Bangladesh Football Federation) in 1972, the national team played their first international match against Thailand in the 1983 Mordecai tournament in Malaysia. After becoming a member of FIFA and the Asian Football Confederation (AFC) in 1984, the national team participated in the 1970 AFC Asian Cup and the 198 FIFA World Cup Qualifiers. But South Africa’s country of the best players has had the best results and it has won the SAFE Championship twice, winning gold medals at the South Asian Games.

The last ten years have seen a continuum of managerial changes for the national team, and many famous coaches have been hired, such as Gergi Kotan of Austria and Otto Pfuster of Germany, who coached Ivory Coast to qualify for their first FIFA World Cup final in 2006. However, in 2006, Argentina reached the quarter-finals of the AFC Challenge Cup under coach Andres Krusania, and in 2010 Bangladesh won the 11th South Asian Games at home under Sovereign Zaran Ngorvević, who left in February of the same year.

The Bangladesh Football Federation (BFF) was established as a member of the governing body on 15 July and has been a member of FIFA since 1974 and the AFC in 1983. The Federation is responsible for organizing all club championships and professional leagues. It is currently working with the AFC's Vision Asia program to improve rural football infrastructure.

It was held in April 2006 under the chairmanship of Kazi Salahuddin.

In a country with a predominantly Muslim population, there is some resistance to women's football. Women's sport has fought for Bangladesh football in the past and many competitions dedicated to women have failed. During the inauguration of the first women's football tournament of the Vision Asia program in November 2006, women's football finally came to light in Bangladesh. Eight teams from different districts across the country participated in the competition and achieved its success amidst security threats.

In October 2006, the first women's school football tournament was held under the BFF's Women's Development Program, a women's sport in developing and developing countries.

The 2010 South Asian Games included women's football in Dhaka, but the first Women's Safe Championship was held in December 2012. Their group included the first women's team to qualify for the AFC U-19 Women's Championship with India, Jordan and Iran.

Email ThisBlogThis!Share to TwitterShare to FacebookShare to Pinterest
Labels: Football in Bangladesh