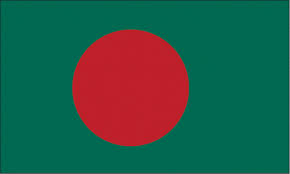 During the Bangladesh War of Independence in 1971, a flag was used to look almost identical, with a yellow map inside the red circle in the middle. On January 12, 1972, the map was removed from the flag of Bangladesh. The difficulty of drawing the map properly on both sides of the flag is one of the reasons for removing the map from the flag.

This flag was determined based on the flag used in the 1971 war of independence , when there was a map of Bangladesh in the middle red circle , later to simplify the flag, the map was omitted. The national flag of Bangladesh is similar to the national flag of Japan , but the difference is that instead of the green of Bangladesh, the Japanese use white. The red circle is slightly pressed to one side, so that when the flag flies it can be seen in the middle of the flag.

Based on the initial proposal of Kazi Aref in the meeting, it was decided to make a flag with a yellow map of Bengal in the middle of the red sun on the green ground. Kamrul Alam Khan (Khasru) then sews a red circle in the middle of a large piece of green cloth from a Bihari tailor's shop in Dhaka New Market; Then Yusuf Salauddin Ahmed and Hasanul Haque drew a map of East Pakistan on a tracing paper with a map book from Enamul Haque in room 312 of Quaid-e-Azam Hall (now Titumir Hall) of Inu University of Engineering. Student leader Shivnarayan Das finally drew the map in the middle of the red circle with his skillful hand.

1971 II and March, the university minded student leader of the country's first national flag hoisted ASM Abdur Rab . He was the vice president of the student union of Dhaka University at that time . The new symbol was created to prevent the use of the East Pakistan symbol, the moon and star. According to the CIA World Factbook ,  the green color of the flag was used to describe the green nature of Bangladesh.

Sheikh Mujibur Rahman hoisted the flag at his residence on March 23, on the eve of the Declaration of Independence. Later, in 1972, Sheikh Mujibur Rahman's government asked Patua Kamrul Hasan to remove the map from the flag designed by Shivnarayan Das and submit a report on the size, color and interpretation of the flag . The modified form by Kamrul Hasan is now the national flag of Bangladesh.

The size of the flag

The specific details of the size of the national flag in accordance with the Flag Rules of the People's Republic of Bangladesh, 1972 are as follows:

The size of the use of

There are different sizes of flags for use in buildings:

There are different sizes of flags for use in automobiles:

Important Government Buildings and Offices, such as the President's Residence, Parliament House, etc., all Ministries and Secretariat Buildings of the People's Republic of Bangladesh, High Court Offices, District and Sessions Judge Courts, Divisional Commissioners, Deputy Commissioners / Collectors, Chairman, Upazila Parishad Offices, Central and District Jails The 'Flag of Bangladesh' is hoisted on all working days at police stations, customs posts, primary, secondary and higher secondary level educational institutions and other such buildings and buildings designated by the government from time to time. The President and the Prime Minister can hoist the 'Flag of Bangladesh' in their motor vehicles, ships and aircraft. In addition, state ministers and persons with the rank of state minister,

The 'flag' should be hoisted at the official residence of the following persons:

The following persons are entitled to hoist the 'Flag of Bangladesh' in their motor vehicles and vessels:

On the following days and occasions, the flag of Bangladesh has to be hoisted at all government and private buildings in Bangladesh and at the offices and consular posts of diplomatic missions abroad:

(A) Birthday of the Prophet ( Eid-e-Miladunnabi )

(B) March 26 is Independence Day

(D) Any other day notified by the Government

The 'flag' is hoisted at half-mast on the following days:

(B) August 15 is National Mourning Day

(C) any other day notified by the Government

The flag should be halved from the top of the pole to the bottom equal to the width of the flag.

Email ThisBlogThis!Share to TwitterShare to FacebookShare to Pinterest
Labels: Flag of Bangladesh