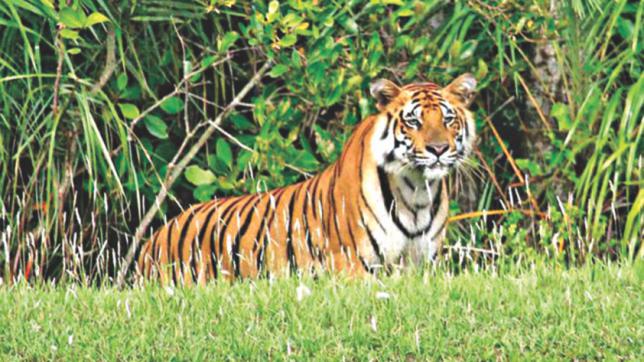 There are about one thousand species of vertebrates recorded so far in Bangladesh. 16 species of bees have been found. Their class is the bee which consists of 11 species. The rest include 4 bees, 2 bumblebees and only the stingless bee species Trigona fuscalatiata .

There are a total of 35 species of scarab dung beetles under 6 genres. The most common genus is Esophagus . Another 30 species of leaf-eating scarabids are found. Lady Birds has about 93 species of which 70 are beneficial. 20 species of fireflies have also been found in the country.

The most common indoor flies include houseflies, stable flies, blue bottle flies, green bottle flies and meat flies. Common outdoor flies include black fly flies, deer fly, horse fly , hoverfly, crane fly, and a few masked ones. There are also some 113 species of mosquitoes , the most common of which are Anopheles , Culex , Aedes , Mansonia , Psorophora and Haemagogus .

More than 400 species of spiders are found under 1300 genera, and 22 families. The largest family is Arenaidae, consisting of about 90 species.

About 124 species of butterflies have been discovered. Most species in the north - east and south - east region live.  In addition, as some species of moth , the most commonly snout moth, rice yellow insect Majra , cilo palicripasasa , siena iphalokesisa medinalis , "akhra nudalisa, skipophaga nibhela liukin dasa arbonalisa , and sapharata.

Includes about 1,700 species of vertebrates. Fish contain the largest number of species among them. Of the 707 species of fish, 442 are marine and rest are freshwater and freshwater . Marine fish are divided into 18 orders and 123 families. Their species includes 56 cartilaginous fish and 38 bone marrow . There are 71 families of 28 species of domestic fish. Of these, Cyprinidae is the largest, with 71 species. There are also 55 species of catfish in the freshwater of Bangladesh.

Anura Order species are included in the amphibians of Bangladesh . Recognized as 6 threats from 22 amphibian species .The number of reptile species found was 126, including 109 and 18 marine species. The 109 underlying reptiles include 2 crocodiles, 21 turtles and tortoises, 16 lizards and 6 snakes . Marine reptiles have 12 snakes and 5 turtles.

There are 626 species of birds in Bangladesh under 16 categories and there are 6 families including 26 Passeriformes . The resident species have a total of 36 (including 181 passerines) and 70 families under 337 orders, the remaining 240 species (including 105 passerines) under 10 orders and 33 families are migratory. The mammals of Bangladesh are composed of 11 species of domestic mammals and 35 families and three species of marine mammals under the order Cetacea.

So far, most of the animals have become extinct in Bangladesh and another 201 species are under threat. This Ramakutta is also called the wild dog of Asia. This species is now endangered by the loss of habitat and prey animals and human cruelty . Notable animal species that have become extinct in Bangladesh are the large single-horned rhinoceros , the Asian two-horned rhinoceros , the gaur , the bonteng, the marine deer , the nilgai , the Indian wolf, the wild water buffalo , the marsh crocodile and the common flower. The majority of the human population lives in or around large cities and this has helped to limit some forestry. However, its growth rate is steadily increasing and this has created greater demand on the environment and subsequently led to the clearing of numerous natural habitats. Although several areas are protected under the law, a large portion of Bangladeshi wildlife is under threat as a result of this increase.

Email ThisBlogThis!Share to TwitterShare to FacebookShare to Pinterest
Labels: Fauna of Bangladesh