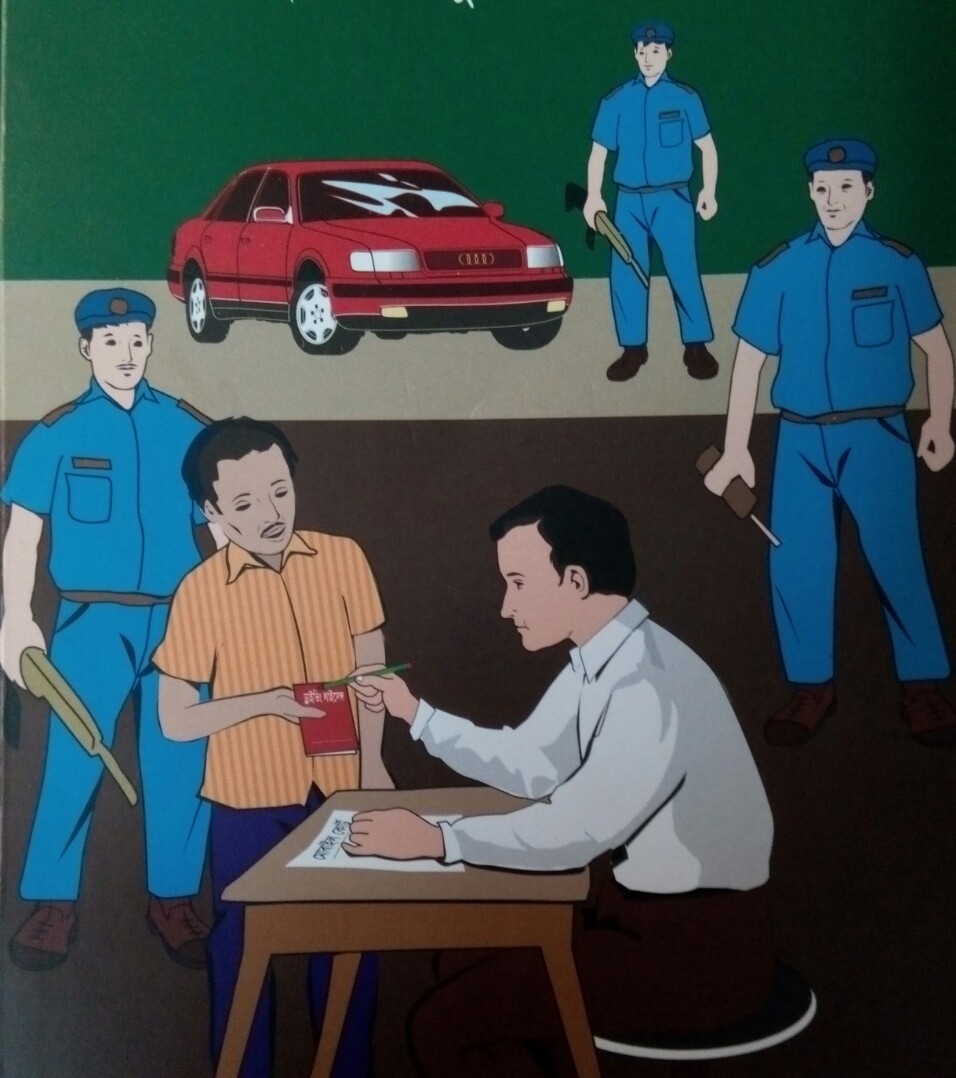 The main organ of the executive branch of Bangladesh is the executive magistrate. The administrative cadre of Bangladesh Civil Service became the executive magistrate. At work they enjoy extensive executive and limited judicial powers. They have been given various powers by various sections of the Code of Criminal Procedure 1898, Penal Code 180, Police Regulation 1943 and other further provisions of the Prevention of Crime Act. The Executive Magistrates of Bangladesh have the power to set up mobile courts or mobile courts (Section 5 of the Mobile Courts Act 2009) to ensure law enforcement, directive, and social justice in various social problems (such as adulteration of food, eve-teasing, drug smuggling, eviction of government property).

According to the Code of Criminal Procedure (CrPC) 1897, members of the Bangladesh Civil Service (Administration), equivalent to Assistant Commissioner (AC), Upazila Executive Officer (UNO) and Additional Deputy Commissioner (ADC), may be Executive Magistrates and their respective Manage the powers of the executive magistrate in the local area. Also, according to section 10 (5) of the CrPC (1895), the Government of Bangladesh may, if it deems it necessary, appoint any person as an Executive Magistrate in the Bangladesh Civil Service (Administration) and delegate to him all the powers of an Executive Magistrate. Each administrative district will have the following executive magistrates:

The government will appoint an appropriate number of executive magistrates in each district and in each metropolitan area as required and appoint one of them as a district magistrate.

All the additional deputy commissioners of the district are executive magistrates.

In the powers conferred by the Criminal Penal Code

General Powers of the Executive Magistrate as per Chapter III of the Code of Criminal Procedure (1898):

1. The power to arrest or order the arrest of a criminal if he commits a crime before a magistrate. (Article 64)

II. Ability to arrest him in the presence of anyone or issue an arrest warrant. (Article 65)

6 ) 4. Ability to search and seize documents of the Postal and Telegraph Department. (Article 95)

5. Ability to issue a search warrant to verify the illicit assets of a person. (Section 100)

7. The power of the security forces to ensure the good behavior of vagrants and suspects. (Article 109)

9. Security forces claim to power on a regular basis to ensure that criminals do good. (Article 110)

1. The power of an executive magistrate to determine the boundaries or areas of power. (Article 10.4)

3. Power to issue warrants for search of offices of postal and telegraph authorities in search of documents. (Section 96)

4. The ability of the security forces to control anti-state propagandists. (Section 106)

5. The power to release a person to ensure good conduct or to maintain peace. (Section 124)

6. Ability to cancel any agreement in the interest of maintaining peace. (Article 125)

6. The ability to repeat the ban on the activities of common pests. (Article 143)

9. Power to order against occupation. (Section 147)

16. Ability to ensure the rehabilitation of oppressed women. (Section 552)

The powers conferred under court

Given the ability of police regulations

Every member of the police force is required to strictly abide by the police regulations. However, courts and tribunals, especially district magistrates and executive magistrates, have to abide by many rules of the Police Regulation 1943. Police Regulation 1943 has been published in three volumes. The first volume contains 1290 rules, the second volume contains appendices and forms, and the third volume contains alphabetical schedules and appendices. It is the duty of every magistrate to read every rule and appendix of this regulation which is of special importance to the executive magistrate.

The police and the district magistrate relationship

Regulation 13: The position of the Commissioner

(A) As the head of local administration, the commissioner shall monitor and control the functions of the district magistrate in respect of the police. (B) The Superintendent shall immediately comply with the instructions received directly from the Commissioner or sent by the District Magistrate, in case of abnormality he shall report to the Inspector General through the Deputy Inspector General.

(A) The Deputy Inspector General of the area shall have constant liaison with the Commissioner and the District Magistrate for maintaining law and order and suppressing crime and shall play a role in establishing a cooperative relationship between the police and the magistrate. (B) He shall communicate with the Commissioner through semi-formal or informal correspondence, keep in touch with the District Magistrate through the Superintendent, discuss with them in person at fixed intervals- for example meeting at their headquarters.

(C) The District Magistrate may summon the documents relating to the character of any police officer of that district and send them to the Deputy Inspector General of the area for notification to the Inspector General and the Commissioner. He can investigate any misconduct of a police officer. The Superintendent will provide all relevant documents to the District Magistrate in important cases and if there is a risk of deteriorating police-public relations.

(D) All orders of the District Magistrate in respect of police within the jurisdiction shall be forwarded to the Superintendent, in his absence to the Officer-in-Charge. The superintendent as the head of the local police administration will be bound to obey the orders of the district magistrate unless it interferes with internal economic affairs, the discipline of the forces and the entire departmental affairs.

(F) In exercising his powers, the District Magistrate shall not do any work which would harm the duties and powers of the Superintendent. For this reason the magistrate should refrain from issuing any executive order without the advice of the superintendent.

(G) The Superintendent may issue any notification or general instruction relating to law and procedure other than the entire departmental matter, unless the matter is approved by the District Magistrate.

Regulation 18: Means of communication between the Superintendent and the District Magistrate

Communication between the Superintendent and the District Magistrate may be by informal letter or note. If possible, original documents should be sent for work, no formal letter is required. Regulation 16: Sending the order of the magistrate to the superintendent

All other orders in the office of the District Magistrate, except for judicial orders, are usually sent through the Superintendent. These orders may include orders regarding visits of district magistrates and other officials and police supplies. The orders of the Subdivisional Magistrate will be forwarded to the Subdivisional Police Officer, in his absence to the Circle Inspector.

The District Magistrate will continuously monitor the prevention and suppression of crime, for which he is responsible. An important part of this responsibility is to regularly inspect the police stations in the district. It is not necessary to look at all the work of the department thoroughly, but the following points should be looked at in particular.

1. General diary and the way it is written.

6. General picture of crime in police station and the reason for its decrease

. Whether the police station officers came to work properly and were aware of their responsibilities.

9. Whether the police station is inspected regularly and properly.

(A) If the District Magistrate finds incompetence and incompetence in the character of a police officer or inspector below or sees incompetence in the discharge of duty, he may inform the Superintendent and request for transfer or appointment elsewhere. He must remember that the transfer is not only detrimental to the work of the police but that the officer who will be transferred may do similar or worse work elsewhere. Punishment can be given for unsatisfactory work but it is not right to order a transfer unless the overall crime situation in the district improves.

Police officers will show respect to all courts and magistrates. It is not right to publicly condemn them, to make derogatory criticisms of their work in departmental investigations or in other published and unpublished reports; However, if the Superintendent feels that justice has not been established or that any police officer has been wronged, he may bring the matter to the notice of the District Magistrate through an official letter submitted by the court officer under Section 435 of the Code of Criminal Procedure or an informal letter or report in moderate Can.

30 a. The letter or report of the Superintendent mentioned in Regulation 30 shall be considered by the District Magistrate and necessary action shall be taken accordingly, however no informal letter or report in this regard should be sent to the concerned Magistrate. Employment of armed parties. [§.12, Act v, 1861]

The relationship between the police and the executive magistrate

Regulation 151: Responsibility of a magistrate with the armed forces

The powers conferred on the Special Powers Act, 1974

(4) If any person fails to take himself out of Bangladesh in accordance with the instructions given under section 1 (2), he may be removed without any hesitation by a police officer under sub-section (5) or an officer appointed by the government appointed on his behalf.

(5) Any person violating sub-section 1 (2) shall be punished with imprisonment for a term not exceeding three years or with fine or with both.

(1) The District Magistrate 10 or the Commissioner of Police 11 may directly order in a metropolitan area that no person shall be allowed to leave the door within a specified period of time within a specified area unless he has written permission from a specific authority or person. Stays.

(2) If any person violates the instructions mentioned in this section, he shall be punished with imprisonment for a term not exceeding one year or with fine or with both.

Email ThisBlogThis!Share to TwitterShare to FacebookShare to Pinterest
Labels: Executive Magistrate of Bangladesh