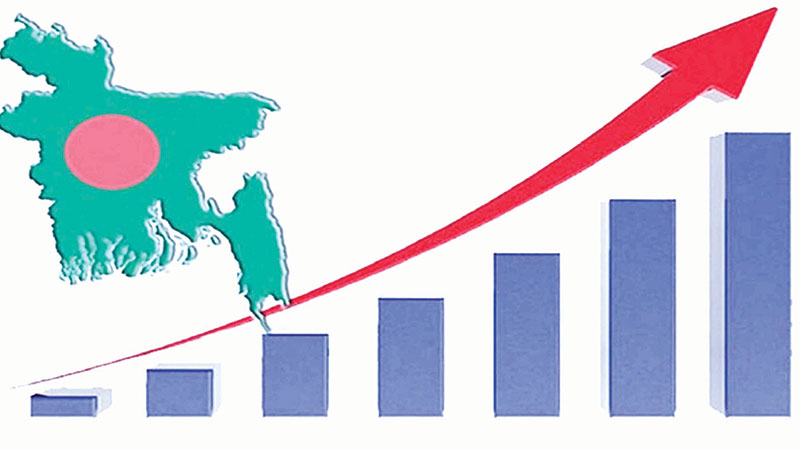 The economy of Bangladesh is a middle income developing and stable economy. The economy features include the madhyamaharera annual growth rate , diffuse poverty , income distribution inequality , the labor force the unemployment , fuel , food and capital goods for the import dependence, national savings nimbahera, aid in decreasing the dependence and the agricultural sector contraction, with the service sector is growing fast. Independence in 1971Bangladesh's economy has made significant progress since its inception. The garment industry in Bangladesh is one of the largest in the world.   Until 1970, Bangladesh's economy was largely dependent on jute and jute products.   At that time, the country earned most of its foreign exchange by exporting jute . But with the advent of polypropylene products, the popularity and trade of jute products began to decline from the 1960s.

Bangladesh's per capita gross domestic product  achieved a maximum growth of 56% in the 1960s, shortly after independence. However, this growth did not last long. The rate was 29% in the 1980s and 24% in the 1990s.

Bangladesh's economy is 39th in the world and 29th in terms of purchasing power parity (PPP) which is 2nd in South Asia. Bangladesh has achieved a growth rate of gross domestic product (GDP) at an average rate of 7.3 percent over the past decade and is currently the 7th fastest growing economy in the world. In terms of purchasing power parity (PPP), Bangladesh currently has a per capita GDP of  4,600. According to the World Bank's 2019 data, the total workforce of Bangladesh is 6,00,09,353.

Bangladesh's GDP growth comes mainly from 5 sectors (manufacturing, wholesale and retail trade, transportation, construction and agriculture) and in the last financial year (2018-19) these sectors contributed 6 percent (Tk 7.5 trillion) to the GDP. According to the Bangladesh Bureau of Statistics (BBS), Bangladesh's GDP grew by 7.15% in the last fiscal, at a fixed price of Tk 11,05,893 crore.

In recent years , Bangladesh has been achieving higher GDP growth from the 'services' and 'industrial' sectors of agriculture . According to the data of 2016, the GDP of Bangladesh in 'services', 'industry' and agriculture sector is 52.11 respectively; 33.6 and 14.23%.

Bangladesh receives a large amount of remittances before these every year and since 2020, the government has been providing incentives at the rate of 2% (Tk 2 per 100) on remittances sent by expatriates.

In 2019, Bangladesh was the 42nd largest exporter in the world in terms of export earnings. In 2016, Bangladesh's share in the global garment market was 6 percent and it was the second largest country in the world in terms of garment exports. In 2019, the contribution of the goods and services export sector to the GDP of Bangladesh was 14.6%.   According to the United States-based organization Green Building Council, Bangladesh has six of the world's top 10 high-quality (environmentally friendly) factories in the ready-made garment industry.

Bangladesh has achieved food self-sufficiency despite the curse of overpopulation . The main reason for this is that the domestic production has increased a lot. At present Bangladesh ranks third in the world in terms of paddy production. Cultivated land in Bangladesh is generally used for paddy and jute cultivation, but wheat cultivation has increased in recent times .   Bangladesh is fairly self-sufficient in terms of rice production. Nevertheless, 10% to 15% of the total population is at risk of malnutrition.   Agriculture in Bangladesh is largely an uncertain monsoon cycleAnd overly dependent on regular floods and droughts . The country 's development is being hampered due to improper development of communication , transport and power sectors . Bangladesh has huge natural gas mines and small mines of coal , mineral oil etc. Although the industrial infrastructure of Bangladesh is weak, the number of skilled workers is plentiful and the wages are cheap.

Since independence in 1971, Bangladesh has received more than  3 trillion or  30 billion in foreign aid and loans from various donor countries, of which  15 trillion has been spent.  Bangladesh's main donors include the World Bank , the Asian Development Bank , the United Nations Development Program , the United States , Japan , Saudi Arabia and Western Europe.States. In Bangladesh, historically a huge trade, this reserve is constantly increasing for the welfare of the workers working abroad. In 2017, the value of these reserves increased to about 3 trillion or 30 billion US dollars, which is the 40th largest reserves in the world.

Bangladesh is currently the 41st country in the economy and the fifth fastest growing country.

This is a list of total domestic production according to the market price of Bangladesh published by the International Monetary Fund which is calculated in Millions of Bangladeshi Taka currency .

The following table shows the main economic indicators in 1980–2019. Inflation below 5% is in green.

According to the data of the Ministry of Agriculture till January 2020, Bangladesh is ranked 3rd, 4th and 8th in the world in vegetable, paddy and potato production respectively. It also ranks 4th in fish, 7th in mango, 8th in guava and 10th in food grain production in the world. The contribution of agriculture to the gross domestic product (GDP) of Bangladesh is 16.6%. Bangladesh's 'Agricultural Mechanization Policy 2019' provides interest-free loans for the purchase of agricultural machinery and the 'National Agricultural Extension Policy 2019' is in the process of finalization. In addition, 'Small Irrigation Policy', 'Organic Agriculture Policy' and 'Important Persons in Agriculture Policy 2019' have been formulated for the betterment of agriculture. Also 'National Agricultural Policy' and 'Deltaplan: 2100' have been prepared. The government has set up a total of 499 'Agricultural Information and Communication Centers' for farmers. (AICC). To mechanize agriculture in Bangladesh, the government subsidizes the purchase of agricultural machinery at the rate of 60 percent for farmers in the haor and southern coastal areas and 50 percent for other areas.

Most Bangladeshis make their living through agriculture .  Although rice and jute are already well-known as the main crops of Bangladesh, the importance of wheat cultivation has increased recently. Tea in the NortheastIs produced. Due to the fertile land of Bangladesh and the availability of easily available water sources, paddy is harvested three times a year in many parts of the country. Due to many regulators, manual labor-intensive agriculture in Bangladesh is slowly improving. Despite the adverse weather conditions, Bangladesh is now self-sufficient in food grain production. Recently, flood control, irrigation management, moderate use of fertilizers and proper capital management have been introduced in the rural economy. As a result further improvement is expected. In 1999, the main crop of paddy in Bangladesh was 200,000.2 million metric tons. In 2003, more than 13,000 tons of various pesticides such as granular carbofuran, synthetic pyrethroids and malathion were sold for paddy cultivation at the national level.  The increase in pesticide use has not only polluted the environment, but has also increased the cost of farming for poor rice farmers.Bangladesh Rice Research Institute is working with various non-governmental organizations to reduce the use of pesticides.   In contrast to rice, wheat production was 1.9 million metric tons in 1999 . Due to population growth, the pressure on arable land is increasing. That is why the fertility of the land is constantly decreasing. That is why there is a food crisis. To address this crisis we have to rely on foreign aid and commercial food imports. Unemployment is still a terrible problem and it is a matter of concern whether agriculture can provide employment to all these unemployed people. Providing alternative employment is a major responsibility of future governments. Livestock is another major source of income for the people of agricultural Bangladesh. This sector is improving very fast.

The readymade garment industry is one of the major contributors to the economic development of Bangladesh and is playing an important role in the country's development. 7-8% of the total growth comes from the garment sector. This industry of Bangladesh is currently being imitated by the developing countries including the developed world. The garment industry is the only medium among the industries that have shaped our economy since independence. Through this industry, they are able to show their hard work and production skills in the world.

Although people have been using one type of cloth since ancient times, in fact the use of cloth made with the help of sewing machines first started in 1855. From there it can be said that it started to be used in Bangladesh much later. The journey of the garment industry in Bangladesh started in 1970. And Riaz Garments was his guide. In 1960, he started a small tailoring factory called Riaz Store in Urdu Road, Dhaka. Since then, Riaz Garments has been supplying clothes to the local market. In 1983, the factory was renamed as Messrs. Riaz Garments Limited. Riaz Garments exported 10,000 boys' shirts worth 13 million francs in 1986 to a Paris-based firm in France. And this was the first direct export of garments from Bangladesh. Then on 26th December 1986, the first establishment of Bangladesh (current public administration) Secretary Mohammad Nurul Quader Khan Desh Garments Limited was established. Does. In 1989, Desh Garments Limited established its first non-equity firm with the support of Daegu Corporation of South Korea. As a result, technical and marketing cooperation was established between Desh Garments and Daewoo Corporation of South Korea. Workers and later inspectors were trained in South Korea to make them suitable for working on machines. These trainees started production in 1970. Desh Garments Limited was the first 100% export oriented company. In 1980, another Korean corporation called Yangon set up its first garment factory in a joint venture with another company called Bangladeshi Trexim Limited. Bangladeshi partners own 51% of the equity in the new company Yangon's Bangladesh. Trexim Limited exported padded and non-padded jackets from Bangladesh to Sweden in December 1970. In this case, the responsibility of marketing was taken by the foreign partners. As a garment manufacturer and garment exporter, Bangladesh actually entered the world market in 1971-72 by exporting readymade garments worth Tk 0.1 billion. At that time the garment industry did not play a significant role in the economy of Bangladesh. However, in just 10 years, Bangladesh's garment exports rose to US 1445 million in 1992-93. From then on, Bangladesh did not have to look back. The amount of garment export is increasing day by day. While the total garment exports in FY 2011-12 were US  19,089.83 million, it increased to US  21,515.83 million in FY 2012-13 and 9,853 million in FY 2013-14. 25 million Along with the increase in export earnings, the number of garment factories in Bangladesh is also increasing day by day. At present there are over 5000 garment factories in Bangladesh. From which a lot of clothes are being produced. After the 90's, the inclusion of women made the industry more dynamic.

Poverty is a multidimensional problem in Bangladesh. It has gripped this country for many years.

Post-independence Bangladesh's export earnings in 1972-73 were only 348.33 million US dollars; The lion's share (90%) used to export jute and jute products Among the other major export products of the time was tea industry and leather industry Over the next four decades, Bangladesh's export earnings increased and the ready-made garment industry was the main sector behind the current situation. Other potential export sectors are pharmaceutical industry and shipbuilding industry.

Email ThisBlogThis!Share to TwitterShare to FacebookShare to Pinterest
Labels: Economy of Bangladesh