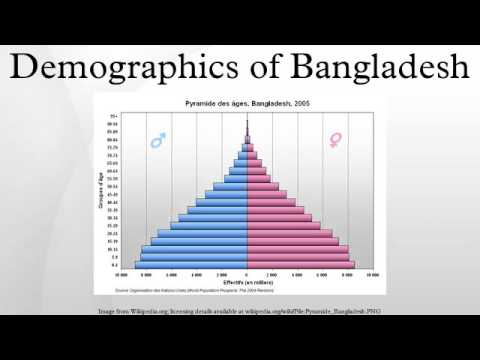 The population of Bangladesh Bureau of Statistics (BBS) data in accordance with the 16 million to 57 million . It is the 8th most populous country in the world. The population density is about 1116 people per square kilometer, the highest in the world (with the exception of a few islands and urban states). The population growth rate here is 1.33%  . The sex ratio in Bangladesh is 102: 100. Most of the people in the country are children and young people (0-25 year olds make up 60% of the total population, over 65 years old only 6%). The average life expectancy of men and women is 72.3 years.  Ethnically, 98% of the population of Bangladesh is Bengali. The remaining 2% are of Bihari descent, or members of various tribes. There are 13 tribes in the Chittagong Hill Tracts. Chakma among themThe chief of the tribe. Garo and Santal are notable among the tribes outside the Chittagong Hill Tracts . Bengali is the mother tongue of 98% of the people of the country , which is the state language of Bangladesh. English is also used in government work. However, since 197, attempts have been made to give precedence to the Bengali language in government activities other than foreign communication. The main religion of the population of Bangladesh is Islam (90.4%). Then the Hindu religion (8.5%), Buddhists (0.6%), Christians (0.3%) and others (0.1%). 21.4% of the total population lives in urban areas, while the remaining 8.6% live in rural areas. There has been a lot of progress in poverty alleviation and public health as a result of public and private development activities. But despite this, a large part of the population of Bangladesh lives below the poverty line. Almost half of the total population, only 1 per US dollar income (005).Arsenic poisoning is an important health problem in Bangladesh. In addition , there is an outbreak of malaria and dengue in Bangladesh . After 2017, the disease is no longer seen. As of 2005, the literacy rate in Bangladesh is about 41%.  As of 2004, UNICEF has a literacy rate of 50% for males and 31% for females. However, as a result of various programs taken by the government, the rate of education is increasing in the country. Of these , the food - for-education program , which began in 1993, has been the most successful. Scholarship programs for girls' education at the primary, secondary, higher secondary and undergraduate levels are also advancing women's education.

Bangladesh is the 8th most populous country in the world. According to the Bangladesh Bureau of Statistics (BBS) data for 2019, which is 16 crore 57 lakh.

Email ThisBlogThis!Share to TwitterShare to FacebookShare to Pinterest
Labels: Demographics of Bangladesh