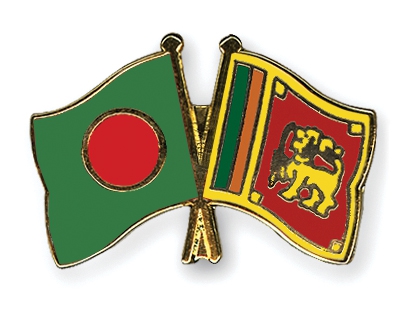 Bangladesh-Sri Lanka relations refer to the bilateral relations between Bangladesh and Sri Lanka . The relationship is friendly because of trade and investment. Bangladesh hosts many Sri Lankan medical students and cricket as a form of friendly communication.

The two South Asian states have historically had ties long before the British colonization. Ancient Pali chronicles mention that the first king of Sri Lanka was one of the ancestors of the Wangar kingdom in modern Bangladesh. In Sri Lanka, Poya Day is a Buddhist public holiday in Sri Lanka.

In August 2008, the two countries discussed the implementation of the new airline to increase trade, investment and strong cultural ties. Sri Lanka's current investment in Bangladesh is in the garment and banking sectors and is expected to diversify in different areas. Bangladesh hosts Sri Lankan medical students and cricket as a form of friendly communication between many of them.

Subject to enhanced bilateral relations, cooperation between the two navies and the deployment of Sri Lankan naval officers to Bangladesh have also been discussed.

Bangladesh-Sri Lanka Joint Workers' Organization was formed in 2013 with the aim of increasing trade. Both countries have agreed to sign a shipping agreement. In 2013, bilateral trade between the two countries exceeded 100 million.