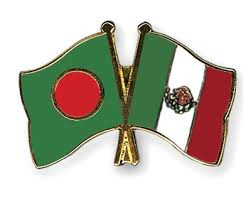 Bangladesh-Mexico Relations is a bilateral relationship between Bangladesh and Mexico . Both countries are members of the United Nations and the World Trade Organization .

On July 7, 1975, four years after the independence of Bangladesh, relations between the two countries were officially established. In 1971, the President of Bangladesh, Abdus Sattar, visited Mexico to attend the North-South Summit in Cancun .

Both countries have expressed interest in expanding bilateral economic activities.  In 2011, a Bangladeshi business team visited Mexico in search of basic opportunities such as bilateral trade and investment. In 2013, it signed an agreement to increase bilateral trade opportunities as well as provide administrative assistance to curb smuggling. Cooperation in the areas of climate change and poverty has also been identified as one of the areas of mutual assistance between the two countries.

2016 in trade between the two countries was worth about $ 80 million to finance the US dollar . Cotton and textiles are the main exports of Bangladesh to Mexico. Mexico's main exports to Bangladesh are medicine, alcohol (beer) and tequila.