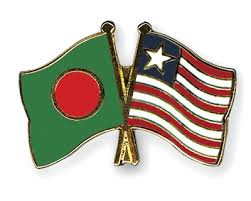 Bangladesh-Liberia relations are bilateral relations between Bangladesh and Liberia . No country has a permanent ambassador to each other.

The contribution to the UN peacekeeping mission

Liberian security officials alleged that Bangladeshi UNMIL, working at the Logatuo border, took away two generators and a water treatment plant from them in May 2013. They also allege that peacekeepers demolished an infrastructure containing 20 UNMILs and handed over everything in its building to Muslims near the border. They accused the Bangladeshi peacekeepers of treating their fellow Muslims one-eyed.

In 2011, a Bangladeshi delegation visited Liberia to discuss new areas for trade and investment expansion. The Export Promotion Bureau of Bangladesh reported that the Liberian public and private sectors around 3 million US dollars to invest. Bangladeshi investors have also expressed interest in opening a pharmaceutical company in Liberia that will create jobs in Liberia.