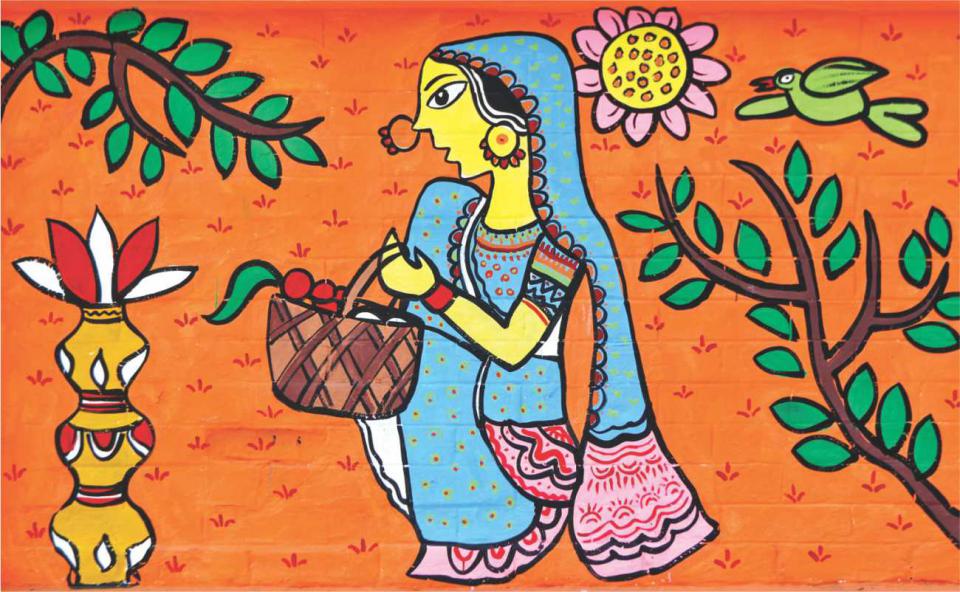 Folk literature of Bangladesh has played a special role in Bengali literature, culture and tradition. Although it was created through the rural population and spread orally from generation to generation, it has enriched and enriched Bengali literature. The creation of individual individuals has become part of the tradition of the people through which love, emotion, feeling and thought have been expressed.

From 300 AD onwards , Maurya dynasty , Gupta dynasty , Pala dynasty , Sen dynasty and Muslims came to this region in stages . The people of this region have been influenced by their way of life and culture . And in Portugal , France , and the British ship its port at the anchor was removed. They have left products as well as culture in this country. Every nation has left its mark not only physically but also with the help of culture and thus the foundation of the culture of this country has been laid.

Bengali saint of the literature

A large section of the rural population has contributed to folk literature. A large part of them are folk-poets who are usually called Bayati. Bayati, from the sound of the words of the ancient Russian BAYAT utpatti banjara boatmen boat and sail comfortably into the heart Bhatiyali song. The driver of a cart or a bullock cart in the northern part of the country picks up the tune of the Bhavaya song while driving . Bauls monochord sound picked up their theories.

Some people have made an unforgettable contribution to bringing their fame to our attention. Chandrakumar de Mymensingh , a resident of Aithar in Netrokona district , collected the lyrics . These songs are edited by Dr. Dinesh Chandra Sen. Published from Calcutta University . Ashutosh Bhattacharya of West Bengal and Bangladesh . Mozharul Islam has recently published many research books on folklore.

Oral literature and its impact

Folk literature of Bangladesh has spread itself in all the conventional branches of folk literature. These are stories, music, riddles, proverbs, superstitions and myths.

The music of Bangladesh is mainly poetic. Indigenous music is more dependent on oral melody skills than musical instruments . We can classify folk songs into seven categories. These are: love, religious matters , philosophy and devotion, action and hard work, profession and livelihood, jokes and jokes and a mixture of these. On the other hand, we see different branches of music in the local folklore. These are: Baul songs , Bhavaiya , Bhatiali , Gambhira , Kavigan , Jarigan , Sarigan , Ghatu songs , Jatra songs , Jhumur songs , Jag songs Etc.

There is controversy over the origin of the word Baul. According to historians, Baul originated in Bangladesh in the seventeenth century. The promoters of this view are Aul Chand and Madhab Bibi. A Vaishnava moneylender named Virbhadra made it popular at that time. Baul gained wide recognition through Lalon Sai's songs. In 2005, UNESCO declared Baul music as one of the world's best oral and visual traditions.

mysticism is an impeccable crop of the ancient folk tradition of Bengali literature . Mystic literature is a transformation of ancient folklore or part of folklore . It is to be noted that although mystic music and Baul music are considered as one in modern times, its historian Syed Mostafa Kamal and others are of the opinion that there are differences in its ideology.

Rangpur is the abode of Bhavaya songs.Due to the scarcity of rivers and canals in the northern part of Bangladesh, bullock carts were used. And the driver of the bullock cart, while driving at night, gets tired and sings in his mind . When the wheel of a car falls on a high-low road, the melody of his song is half-broken or folded. The lyric style that is broken or folded in such a melody is noticeable in the song 'Bhavaya'. All these songs reflect the local culture, the way of life of the village, their workplace, family events etc.

Bhatiali is a popular folk song of the Bhati region of Bangladesh . Especially in the river-filled Mymensingh region in the north-eastern region of the Brahmaputra river , the original creation, practice and influence of Bhatiali music has a huge impact. According to the Bauls, Bhatiali songs are songs that share their realism.  The main feature of Bhatiali songs is that these songs are composed mainly about boatmen , boats , beards , guns etc.

Bangladesh and Malda region of West Bengal . Nana-grandson is very popular as the main character of Gambhira in Chapainawabganj district . Shiva is one of the gods of traditional religion . Another name of Shiva is 'Gambhir'. The name of the song that was sung in worship of Shiva at the festival of Shiva became 'Gambhira' over time. Shiva> serious> serious. One by one the problems were highlighted by acting in turn-serious. In Chaitra-Sankranti, Pala-Gambhira was served.

Kavigan is a special genre of Bengali folk music. In this genre, folk poets participate in competitive singing competitions. Kavigan is usually sung by two groups. Each party is led by a "poet" or "government". His assistant singers are called "Dohar". They usually repeat the words of the leader.

The word jari means mourning or weeping. The origin of this word is Persian language. However, the word has gained wide meaning in Bengal. In Bangladesh, on the special day of Muharram, the story of the tragic events of Karbala with dance songs is commonly known as jaringan. This style of singing has been prevalent in Bengal since the 18th century.

The traditional ballads of Mymensingh region are collectively called Mymensingh Geetika . These songs have been heard by people since ancient times. However, in 1923-32, Dr. Dinesh Chandra Sen edited these songs and published them from Calcutta University . Chandrakumar Dey , a resident of Aithar in present day Netrokona district, was collecting these knots.

The traditional folklore of the East Bengal region is collectively called East Bengal Geetika . Palas, which have been practiced orally since ancient times, are an invaluable resource in Bengali literature. In 1926, Dr. Dinesh Chandra Sen edited and published the palas with the financial help of Calcutta University . Later, in 1981-1985, Khitish Chandra published the original and ancient East Bengal lyric in seven volumes.

The folklore of Sylhet folklore, such as oral ketcha, kahini, jatra-pala, etc., is simultaneously termed as Sylhet Geetika . The source of Sylhet lyricism is considered to be the daily lifestyle of the ancient people of Sylhet region, the livelihood of the indigenous people, feudal system of governance, rural folklore, emotional feelings, love-separation, war-fighting and humanity. According to Professor Asaddara Ali padatta list includes 120 cases lokagathake gitika country  In addition, in 1968, Ghulam Akbar Chowdhury Bengali Academy to select 10 songs together, country songs with the name was published.

Folklore is all those stories that are passed down from generation to generation through the mouths of people. These are composed in the form of prose and can be simple or complex. Folk tales based on subject, meaning and structure can be fairy tales , myths, adventure stories, stories of heroism, historical stories, stories of sages. The characters in the local stories are mainly based on fate and the stories are dominated by magical powers instead of knowledge and intellect.