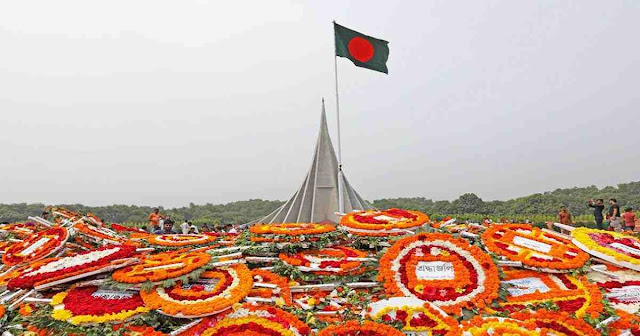 Bangladesh Independence Day which is celebrated on 26th March is the National Day of Bangladesh. On the night of March 25, 1971, the people of the then East Pakistan officially started their struggle for independence. On 26 March, Ziaur Rahman called on Bangabandhu Sheikh Mujibur Rahman from the Kalurghat radio station in Chittagong to formally participate in the war of independence for the benefit of the people of Bangladesh. In a circular issued on 22 January 1972, this day was celebrated as a national day in Bangladesh and was officially declared a holiday.

Independence Day celebrations began with the laying of wreaths at the National Memorial .

On March 25 , 1971, the then West Pakistan government launched an attack on the innocent people of East Pakistan (now Bangladesh) in the middle of the night. There were shelling in different parts of Dhaka, brutal torture of women in many places and planned killings in many places. In this situation the Bengalis got their backs against the wall and in many places many people started preparing for war without waiting for the official announcement. After receiving the official declaration, our Bengali people jumped into the war against the West Pakistani junta and as a result of India's unforgettable support, Bangladesh emerged after the liberation of East Pakistan through a long 9 month bloody war.

Operation Searchlight is a planned genocide carried out by the Pakistani army from March 25, 1971, through which they sought to suppress the Bengali nationalist movement in March 1971 and earlier . The genocide was carried out at the behest of the West Pakistani rulers, in the aftermath of Operation Blitz in November 1970 . The main objective of the operation was to capture all major cities by March 26 and wipe out political and military opponents within a month.

The Declaration of Independence

At midnight on March 25 , 1971, Sheikh Mujibur Rahman was arrested by the Pakistani aggressors. Shortly before his arrest, shortly after midnight on March 25 (early morning of March 26), he signed the Declaration of Independence of Bangladesh, which was sent for broadcast on a transmitter of the then EPR in Chittagong. .

The announcement is as follows:

Translation: This may be my last message, Bangladesh is independent from today. I urge the people of Bangladesh, wherever you are, to continue to resist the occupying army with all your might. May your war continue till the last Pakistani soldier is ousted from the soil of Bangladesh and the final victory is achieved.

On March 26, Belal Mohammad , Abul Qasim and some other officials of Chittagong Betar Kendra and local Awami League leader M. A. Hannan first mimicked Sheikh Mujib's declaration of independence. Later on 26 March  Major Ziaur Rahman, the then Bengali officer of the Pakistan Army [9], declared independence from the Kalurghat radio station in Chittagong. The commentary of the declaration is as follows:

Translation: I, Major Zia, declare the independence of Bangladesh on behalf of Sheikh Mujibur Rahman, the Provincial Commander-in-Chief of the Bangladesh Liberation Army.

I further declare that we have formed a sovereign and lawful government under Sheikh Mujibur Rahman which is committed to continue functioning in accordance with the law and the Constitution. In international relations, our government is committed to a non-aligned policy. This state will maintain friendly relations with all nations and will continue its efforts for world peace. I urge the governments of all countries to build public opinion against the brutal genocide of Bangladesh in their respective countries.

The government of Sheikh Mujibur Rahman is a sovereign and lawful government and demands the recognition of all democracies in the world.

This declaration of March 26, 1971 marked the beginning of the bloody war of independence on the soil of Bangladesh which lasted for nine months.

Bangladesh Independence Day is celebrated in a very colorful way. The celebrations began with the laying of wreaths at the National Memorial. The day got off to a good start with 31 rounds of artillery fire. As the sun rises, national flags are hoisted in government, semi-government, autonomous and privately owned buildings. On the occasion of the day, from morning till night, the main roads and road islands of the city are decorated with national flags and flags of different colors. Gatherings, parades, displays and physical exercises of the students of the educational institution were held at the National Stadium.